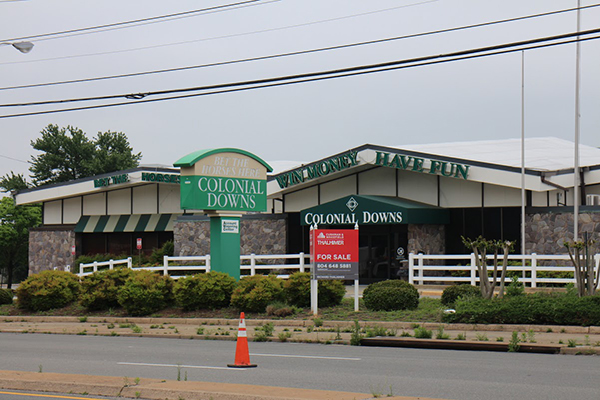 Lidl is planning a store on the site of the former Colonial Downs better parlor on West Broad Street. Photo by Michael Thompson.

In a bid to set up shop between two of its rival’s new Richmond locations, a European grocery chain is eyeing the site of a vacant horse betting parlor for its newest store.

Lidl, through its Lidl US Operations LLC, filed preliminary plans April 28 with the Henrico County Planning Department for a 36,000-square-foot grocery store at 4700 W. Broad St.

The 3.72-acre parcel is currently home to the former Colonial Downs wagering center that closed last year as part of the horse racing organization’s unraveling.

If approved, the West Broad Street Lidl would be at least the sixth location the German grocery chain has in the works around Richmond. Its other sites are 11701 Iron Bridge Road and 1301 Mall Drive in Chesterfield County, and in Henrico County: 5110 S. Laburnum Ave., a site along Staples Mill Road and in the forthcoming GreenGate development in Short Pump. 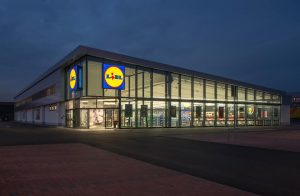 A Lidl store in Arcole, Italy.

Like its other future stores, this latest Lidl outpost would sit near locations of its fellow German competitor Aldi, which has at least nine locations either open or in the works in the area. Lidl’s latest plans would put it in between the recently opened Aldi off North Boulevard at 927 Meyers St. and another Aldi at 6295 W. Broad St.

The Colonial Downs property is for sale and being marketed by broker Richard Thalhimer of Cushman & Wakefield| Thalhimer. He would not comment for this story.

The property is near a Burger King, Cook-Out and Wendy’s, as well as Anthem and Willow Lawn. As part of the approval process, a traffic study for Lidl’s plans are required.

Lidl announced in June it was opening a U.S. headquarters in Arlington, where it will eventually employ 500 people, company spokesperson Will Harwood said. Last fall, the company broke ground on a $125 million distribution center and regional headquarters in Fredericksburg that will employ 200 people. Lidl plans to begin opening its wave of U.S. stores no later than 2018 and is actively looking for sites from Pennsylvania to Georgia.

“Virginia is a big part of the company,” Harwood said. “It’s home base for us.”

Despite what’s already been reported and is in the public record, Lidl won’t comment on any of its proposed stores.

It’s the ideal location for Lidl. It’s an uber Trader Joes and Richmond will be excited about them when they open in each community.

I hope the building is build to have frontage/entrance on Broad st with little to no setback. This location is only about 1000 feet from a potential Pulse BRT stop at Staples Mill, and easily walkable. It would be great for people on the bus line to have access to a high quality grocery store within this distance of a stop.