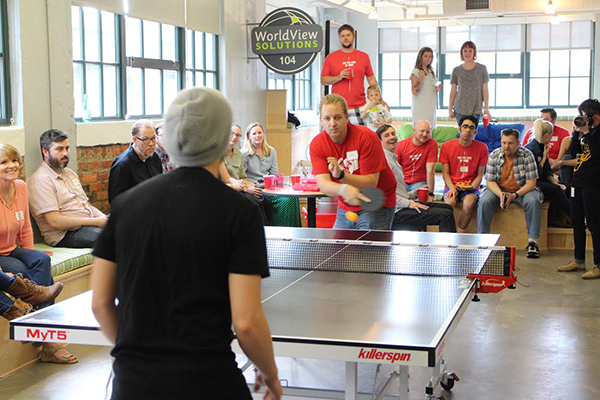 Shockoe Slip became ping pong central last Friday, as a segment of Richmond’s creative industry turned their mutual love of table tennis into a charitable cause.

The inaugural Shockoe Showdown Ping Pong Tournament took place over three hours in four different locations in the Slip, culminating with a final round at WorldView Solutions’ new space in the Canal Crossing complex at S. 15th St.

The GIS consulting firm put on the event and took part in the competition along with Shockoe neighbors The Martin Agency, Hue & Cry, Park Group, Randall Branding, Torx Media and Workshop Digital.

As part of the tournament, each company donated $100 to its charity of choice, with additional proceeds from entry fees and T-shirt sales going to the winning team’s group. Charities included the Richmond SPCA, Children’s Home Society of Virginia, Pediatric Brain Tumor Foundation, CJ’s Thumb’s Up Foundation, Pajama Program and World Pediatric Project.

Following several grueling rounds, the competition came down to a matchup between two brothers: Andrew and Timo Prousalis – both animators at Hue & Cry, a production arm of ad giant The Martin Agency. 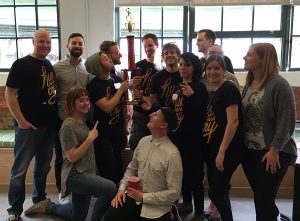 In the end, it was Timo Prousalis who came out on top, securing the tournament trophy – and an additional $500 for charity Pajama Program – for the animation studio that is about to set up shop in the same building as Park Group. Randall Branding and Torx Media likewise share a building.

Such proximity to each other, and the sense of community that results, is what prompted WorldView Solutions to organize the event and other gatherings it has hosted in recent months, said Beth Petersen, the company’s operations and marketing manager.

“It’s a fun thing for the design district down here,” Petersen said. “There are so many creative companies, and we really want to be open to our neighbors and other companies. It’s just a fun way to bring exposure.”

The trend appears contagious, as a recent social hour at WorldView is what Carlos Chafin of In Your Ear studio said inspired him to start his own networking series: the live music-centered Shockoe Sessions, a future edition of which WorldView plans to sponsor.

Nearby marketing firm Red Orange Studio recently started a monthly coffee talk series, and other networking options have popped up in recent months, including a local chapter of Creative Mornings.

Petersen said the idea for a ping pong tournament evolved out of discussions at WorldView’s social hours that revealed a mutual love of the sport among its neighbors. Jesse Randall of Randall Branding was among the ping pong enthusiasts who encouraged the event, and Wendy LaMaskin with Park Group helped with organizing and publicity.

LaMaskin said the group hopes to hold another tournament in the fall and potentially expand it to include more locations, companies and charities.