As it looks to fill the commercial space left vacant by the departure of anchor tenant Southern Season earlier this year, Libbie Mill Midtown is moving forward with construction of the mixed-use development’s first residential pieces.

Construction is underway on the Neighborhood of Libbie Mill Midtown, a mix of townhomes and condos totaling 994 units for purchase. Work has also started on the development’s first apartment building, a five-story structure in the heart of Libbie Mill that will total 327 rental units and 494,000 square feet.

Construction started in June and is slated to wrap up on the apartment building in 2018. Models for the townhomes and condos are slated to open in the first quarter of next year.

Gumenick Properties, the developer behind Libbie Mill, is building the townhomes and condo units. The apartments are being built by Whiting-Turner, a national firm headquartered in Baltimore. Richmond-based Commonwealth Architects is designing all of the units.

Gumenick spokesman Ed Crews said the work continues the earliest phase of development for Libbie Mill, which started in 2014 and is slated to take 10 years to complete. The 80-acre development between Staples Mill Road and Libbie Avenue is approved for 994 homes, as many as 1,096 apartments and about 200,000 square feet of commercial space. 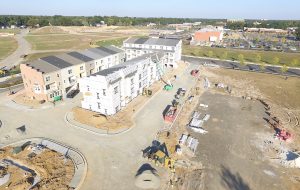 Townhomes under construction at Libbie Mill. On the left, construction is further along on a row of houses. (Kieran McQuilkin)

The apartment building, under construction between Libbie Mill Library and the development’s entrance off Staples Mill Road, will hold 327 units above 40,000 square feet of retail space on the ground floor. The building will also include space for covered parking with a recreation area situated above it. The 1-acre area will include a swimming pool, sundecks and dining and grilling areas.

Apartments will range from 450 to 1,265 square feet, with studios up to three-bedroom floorplans. Each will have a private balcony or terrace and access to a community center, fitness center and other facilities. Crews said market conditions will determine rental rates for the units.

The townhomes and condos are being built on on the development’s western side, closest to Libbie Avenue. The townhomes, housed in three-story buildings, will range from 1,300 to 2,400 square feet, two to four bedrooms and 2½ to 3½ baths. They will be priced starting from $285,000 to $449,900 and up.

The for-sale homes will be built in three phases of 42 condos and 107 townhomes. Private amenities, to be built in the third phase, will include grilling areas, parks, a pool, cabanas, a yoga pavilion, indoor and outdoor entertaining areas and a community building. 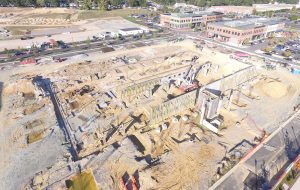 Construction on the foundation of part of the upcoming Libbie Mill development. (Kieran McQuilkin)

Home sales started earlier this year, and Crews said nine have been sold thus far – up from five townhomes reported sold in April. Crews said the first units should be occupied by year’s end.

Crews would not say how much the construction projects will cost, adding that Gumenick does not release those figures.

As construction progresses on those residential pieces, Libbie Mill continues to look for an anchor tenant to replace Southern Season and its in-store restaurant, Southerly, both of which closed in April. The gourmet foods store occupied a 53,000-square-foot space at 2250 Staples Mill Road.

Crews said Gumenick has received interest from multiple parties but has yet to sign a contract for the space, which could accommodate another grocery store or similar-sized tenant.

“We believe this is an excellent location and are confident it will be filled,” he said.

Only about 300 new Class A apartments are built in Henrico each year driving the rental costs higher for properties that are 30 years old. The demand for new affordable rentals is through the roof in the west end.

Yes it is and it’s really sad because it’s driving people away because the housing is becoming so unaffordable in the area. I mean this is Richmond, not New York, DC or Los Angeles. I live in apartments near VA Center Commons built in 1991 and my rent has gone up nearly 35% in the last five years. Unfortunately so has every other apartment complex in the area, so you either find a way to pay it or leave the area because most people haven’t seen a 35% pay increase in the last five years.