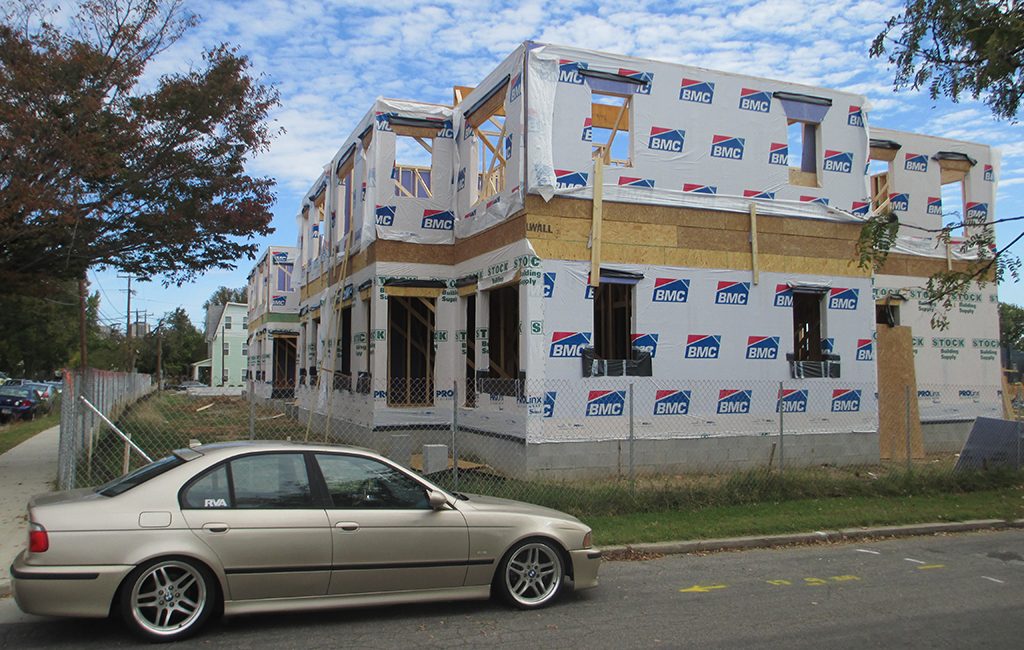 Having collaborated on several smaller projects in the area, a local builder and developer are partnering 50-50 on their largest Manchester development to date.

Macfarlane Partners’ Charles Macfarlane and Corinthian Construction’s Ben Adamson have begun work on Manchester Park: a combination of six townhome-style duplexes and a 12-unit apartment building with a corner commercial space along McDonough Street between West 13th and 14th streets.

Adamson described the project as a mix of two products they’ve had success with in Manchester: his 21-unit apartment project at 12th and Bainbridge streets that’s home to Brewer’s Café, and duplexes he built for Macfarlane across the street and nearby along Perry Street.

Where Adamson’s firm has served as Macfarlane’s builder in the past, he said they’re working on Manchester Park as equal partners, with Adamson taking the lead as developer and general contractor.

Macfarlane, who is juggling other projects in North Carolina and Richmond’s Tobacco Row, where he and developer Sam McDonald converted the building at 2323 E. Main St. into apartments, said partnering with Adamson made sense on a practical level.

“Ben has been a very good business partner-contractor, so we thought it would be appropriate to team up with him,” Macfarlane said. “I’m busy working on some other projects, so it seemed appropriate to have him be on point and be the developer, managing partner and also the contractor – just trying to be efficient with the resources that we have.”

A rendering of the development, courtesy of Macfarlane Partners.

The 1-acre property for Manchester Park was among 30 or so parcels Macfarlane purchased from the Virginia Museum of Fine Arts Foundation when it sold off about 30 acres in Manchester that had been donated by Harwood Cochrane, the late Richmond philanthropist and founder of Overnite Transportation.

Another 130 or so parcels were purchased by developers Robin Miller and Dan Gecker, whose Urban Development Associates has been building and renovating detached homes and duplexes throughout the area while also developing larger-scale projects, such as the 150-unit Terraces at Manchester. A row of homes under construction a couple blocks away along Porter Street are among their holdings.

Work on Manchester Park started Sept. 1 and is slated to continue through next spring. Adamson said the first cluster of duplexes should be ready for occupancy in March, and the rest of the project should be finished by June.

The 12 one-bedroom apartments will each total 750 square feet and rent for about $1,000 a month. The building will include a 1,600-square-foot corner space for a commercial tenant, similar to the Brewster’s Café space. Adamson said the rent for that space is to be determined and will depend on whether it’s a shell space or finished.

Adamson put the overall cost of the development at $3.3 million. Xenith Bank is the lender.

“We’ve had great feedback from people in the past,” Adamson said of their comparable residential products. “A lot of our tenants are folks that went to VCU, they’ve graduated and they’re done with the Monroe Park Campus-type living, and they’re excited to come to Manchester – have a yard, have a dog.”

As part of the project, Adamson and Macfarlane are also contributing to improvements for the adjacent city-owned Alice Fitz Playground at 13th and Perry streets. In addition to making cash contributions toward improving the playground, they’re also volunteering to plant trees and replace the park’s chain-link fence with vegetation.

Macfarlane said the additional work is something they wanted to do, for the betterment of the neighborhood as well as Manchester Park.

“There are some minimal things that can be done, and we’re trying to help the city accomplish those,” he said. “That’s something we’re doing not because anybody’s asked us, but because we think it’s the appropriate thing to do and we want a nice amenity for the community.”

Manchesters residential growth is just getting started and several more hundred units are on tap. Most of the units will be ground up rather than lofts so the community will have a very different vibe than Scotts Addition or Church Hill. The architecture will have a different look and there will be a lot of height along Hull Street and Semmes Avenue. It’s all going to be very cool when it’s completed. The business district is under going a major rebirth. Look for a myriad of restaurants to hit the area.

When is someone going to build a grocery store in Manchester? The east end is constantly talked about (rightfully so) as a food dessert, yet inexplicably, Manchester and the surrounding area, who has it far worse, never gets mentioned.

The South Reynolds property has plans for a grocery store fronting Hull potential delivery as early as late 2017. There are also rumors of a developer involved in Kroger-anchored projects eyeing property around Semmes and Cowardin.

Fantastic that infill development is occurring in the neighborhood. More residents to help support the proposed retail. **Brewer’s Cafe**