The anchor of a massive mixed-use development in Short Pump is beginning to take shape.

Bon Secours Richmond Health System has broken ground on its $20 million facility at 12400 W. Broad St. in Broad Hill Centre, the development by Atack Properties that sits between the Wegmans- and Cabela’s-anchored West Broad Marketplace and the Henrico-Goochland line.

The medical system paid $6.9 million for nearly 21 acres on the site in a deal that closed in late 2014.

While much of the 70-acre development surrounding Bon Secours’ parcel has been completed or is under construction, the medical component of Broad Hill Centre has been one of the last to launch.

Kevin W. Barr, chief executive officer of Bon Secours Virginia Ambulatory Care, said plans now call for the Short Pump facility to be a scaled-down version of what was announced two years ago. 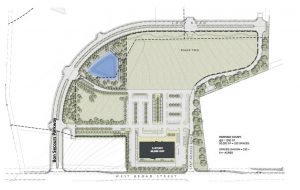 The facility, which will front West Broad Street, is set to house a 12-bed, free-standing emergency room, a medical imaging center and room for primary care.

Other features will include a virtual health-space kiosk that will allow patients to check in 24-7, with virtual doctors to diagnose symptoms, Barr said. The facility will also house an open-ended MRI – an imaging machine that scans the patient without having to place them in confined spaces.

“It’s going to be a 21st-century facility,” Barr said. “Our commitment has been, and remains, to providing quality healthcare to the area.”

Newport News-based W.M. Jordan Co. has been tapped as the general contractor of the facility, Barr said. Richmond-based Odell Associates Inc. served as the architects on the project, and California-based Petra-ICS serves as construction manager.

Bon Secours joins a wave of medical firms and partnerships pouring into the western Henrico and eastern Goochland area.

Nearby, VCU Health has opened its Neuroscience, Orthopaedic and Wellness Center at 11958 W. Broad St. In October, Sheltering Arms Hospital and VCU Health announced plans to build a joint 114-bed inpatient rehab facility on about 25 acres in The Notch section of West Creek Business Park. And the Medarva Healthcare-anchored building at 1630 Wilkes Ridge Parkway in Goochland’s West Creek Medical Park is set to grow by 15,000 square feet.