After being defeated a year ago, the fight against the “45 percent rule” is back.

State Sen. Bill DeSteph (R-Virginia Beach) has introduced a new version of a bill that last year was backed by a group of Richmond bar and restaurant owners, aimed at lowering what they see as an onerous food-to-liquor sales ratio.

Virginia law requires bars and restaurants to have at least 45 percent of total sales come from food and nonalcoholic beverages. Beer and wine sales don’t count against the ratio, only liquor.

Last year, a bill (HB 219) that sought to drop the ratio to 25 percent died in committee. DeSteph said his proposal may have a better chance this year by reducing the food-to-beverage ratio to 35 percent, with a further reduction for restaurants that sell a certain amount of food per month.

The proposed bill says that for “(restaurants/bars) with monthly food sales of at least $4,000 but less than $10,000, the food-to-beverage ratio shall be 35 percent.”

Bars and restaurants with monthly food sales exceeding $10,000 would not have to meet any food-to-beverage ratio.

DeSteph said the reduction included in the new bill is the result of a study by the Senate Committee of Rehabilitation and Social Services Studying ABC Issues, which recommended changing the proposed reduction from 25 percent to 35 percent.

There is no timeline for when the legislation, SB 970, will be voted on.

Mac McCormack, a local bar and restaurant owner who supported last year’s ratio-reduction bill and believes the ratio should be eliminated altogether, feels similarly this year.

“Maybe we should pose a bill that requires senators work 320 days per year, instead of the what, 80 days they currently do. This hurts business, and it hurts the state since they’ll see less tax dollars.” 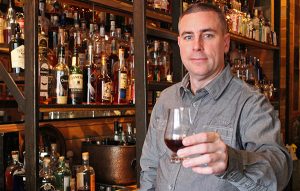 Mac McCormack owns a string of whiskey bars and restaurants.

DeSteph has another booze-related bill, SB 1216, that would “require mixed beverage licensees (bars/restaurants) to have food, cooked or prepared on the licensed premises, available for on-premises consumption whenever spirits are sold or served.”

It would mean that whenever an establishment is serving spirits (not including beer or wine), it would also have to serve food.

DeSteph said this is an effort to clarify a misinterpreted law.

“The intent of the law that was passed in 1971 was that food is served at all times alcohol is served,” DeSteph said.

In the 1980s, the law was changed to allow beer and wine sales after the kitchen was closed, but spirits were never technically removed. “We want to go and re-clarify the original intent of the law,” DeSteph said.

In light of that proposed bill, McCormack said he is upset with the idea of further regulations.

“It’ll pretty much eliminate all business after 10:30 p.m. It costs me about $100 per hour in labor to keep the kitchen open,” McCormack said.

The bill was approved unanimously by committee last week, and will be voted on in the Senate this week.

Additionally, a bill is being put forward that would increase taxes on retail sales of liquor at ABC stores by 1 percent.

The current state sales tax on liquor in ABC stores is 5 percent, on top of a 20 percent state excise tax. Last year, the Virginia ABC’s gross sales were $898 million. If passed, the  bill would yield an additional $8.98 million for Virginia law enforcement.

“The Virginia Distillers Association appreciates the efforts of Virginia’s public safety employees, and believes they should be appropriately compensated. However, the VDA strongly opposes SB 1314, and any other legislation that singles out the products of our industry for higher taxation. Spirits are already heavily taxed in Virginia, and there is no evidence of any particular contribution of distilled spirits products to the need for law enforcement services,” Coleburn said.

Carrico, a retired state trooper, was not available for comment.

This isn’t the only legislation at the General Assembly that would affect retail sales of spirits in Virginia. The VDA is supporting a bill that would allow for looser sales restrictions at events.

The General Assembly closes at the end of February.

Correction: A previous version of this story incorrectly stated that the General Assembly session ends this month. It ends in late February.