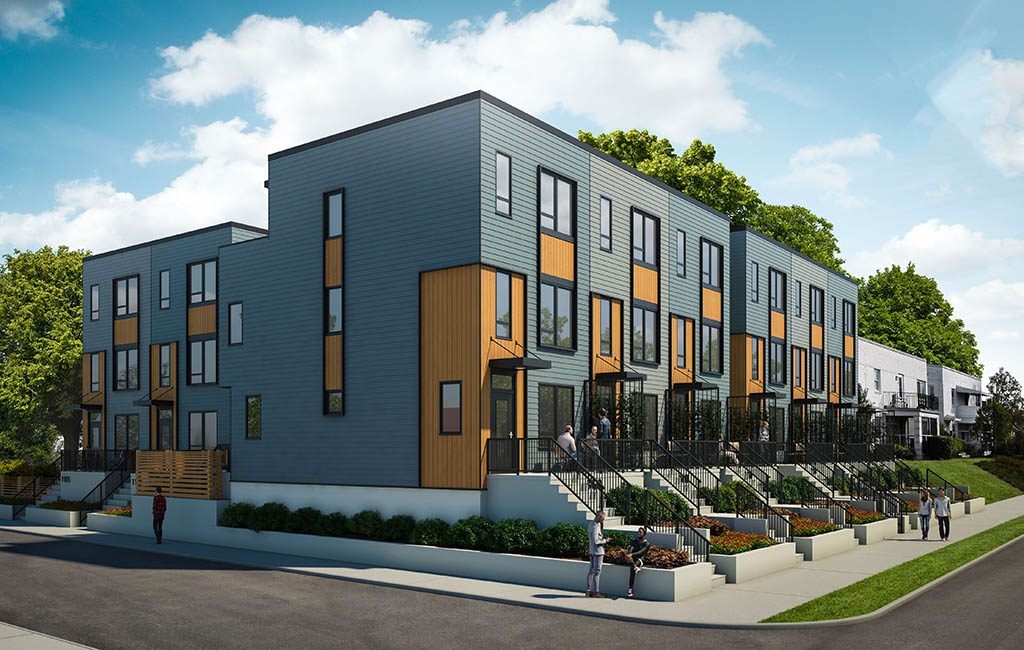 Construction on The Meridian, an eight-unit development at North Thompson Street and Cutshaw Avenue, is set to begin in March. (Rendering courtesy RenderSphere)

A cluster of new rowhouses planned just south of Scott’s Addition is about to start going vertical.

Carter said the price point could attract potential homebuyers with access to amenities in nearby Scott’s Addition and the Museum District.

Existing buildings fronting Cutshaw Avenue and a parking lot behind them will be demolished to make way for the development. 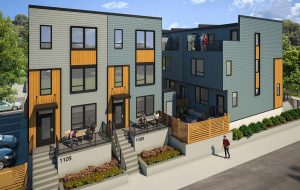 Plans call for each unit to total 1,800 square feet and include a rooftop deck, open floor plan and off-street parking. (Rendering courtesy RenderSphere)

Snipes’ firm purchased the 0.34-acre parcel at 3412 Cutshaw Ave. two years ago for $390,000, according to city tax records. Plans for the development were approved by city council last year.

Snipes estimates the the project would cost $2.5 million. Financing is being provided by Village Bank. The units will be marketed and sold by Snipes Properties.

Richmond-based Johannas Design Group has been tapped as The Meridian’s architect, while Williamsburg-based Lars Group has been retained as site contractor. Local firm Kine Vue is the civil engineer, and Rob Stephens of River West Group is the construction administrator.

The Meridian adds to a flurry of new residential development emerging in established city neighborhoods. To the south along Thompson Street, at its crossroads with Patterson and Kensington avenues, Oliver Properties is wrapping up its 50-unit Carytown Crossing apartments.

Farther east in the Fan, work finished last summer on Huntt’s Row, a cluster of eight rowhouses and two condos at Kensington and North Robinson Street. Those units range from 2,400 to 2,700 square feet and start in the mid-$600,000s.

Across the river, site work is underway on 7West, a 12-unit townhome development on a half-acre site at the foot of the Manchester Bridge. The three-story townhomes are priced in the $700,000 range.

>> “Rents for a 1,800-square-foot apartment are about $1,800 to $1,900 a month … For about $2,200 a month you could own a single-family unit in The Meridian.” Framing it that way makes it seem like a no brainer. But of course, unless they have some property tax abatement not mentioned in this article, the $2200/mo only works out if you put 20% down. So that is like a $90-100K downpayment. There are other ways to make that kind of $$ earn stable returns. More than likely somebody will try to buy with only 10% down. And their PITI mortgage… Read more »

Mid $400K might be a bit ambitious for the neighborhood. I used to live a block away at Grace and Thompson. Most of the buildings/houses in this area (north of Monument, south of Broad) are older, smaller, and renting for quite a bit below the $1,800 quoted. Add to that this project will stick out in style quite a bit from existing properties, and I’m going to bet Snipes is going to be more hard-pressed to sell at their desired price point than indicated.

Nolde’s sales at Kensington and Robinson, albeit in the historic Fan District, were at close to a $700K average. I’ve seen relatively small houses in the MDA going for more than $500K, selling the first day on the market. Snipes knows the market; he works it every day.

Agreed. As I mentioned below I rent a same sized townhouse one block away from these for $725- new development is attempting to artificially raise the cost of living in these districts. They’re starkly different from any museum district architecture- and certainly not in a good way. I have a feeling they’ll have a difficult time filling these.

Carter and Ann Snipes are making their mark on the local real estate scene. This is yet another improvement along the Thompson Street corridor, joining the new apartments by the Olivers and Spyrocks Midtown Gallery. Hopefully something will be done about those decrepit office buildings on the east side of Thompson.

Jason,
You forgot to add a couple of things. The interest you pay is deductible and the fact that over time when you make your rent payments you will have nothing to show for it but owning and pay mortgage you are building equity. Not only are you paying for a place to live but it is an investment.

As someone who owns property across the street from this development, I welcome the addition to both the street and the neighborhood. This is a wonderful new chapter and we look forward to the continued growth around the confluence of the Museum District and Scott’s Addition.

I live across the street from these horribly ugly townhomes- they stick out like a sore thumb. I live in a 2 bedroom townhouse with basement and pay $725/month. These developers are sorely off the mark and managed to create buildings that are completely out of step with the surrounding architecture.