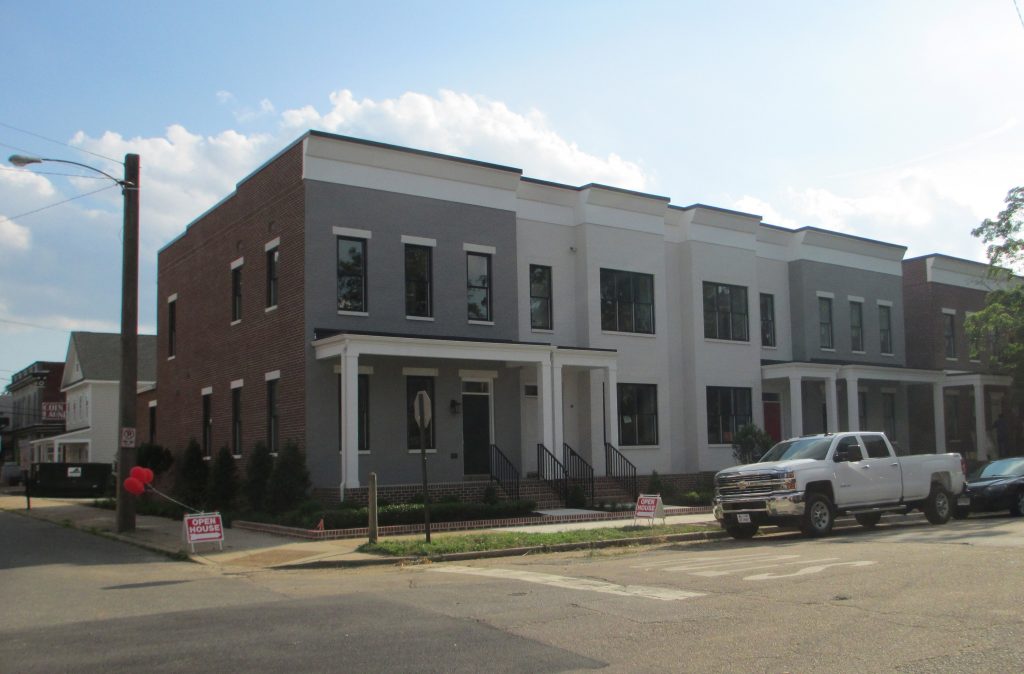 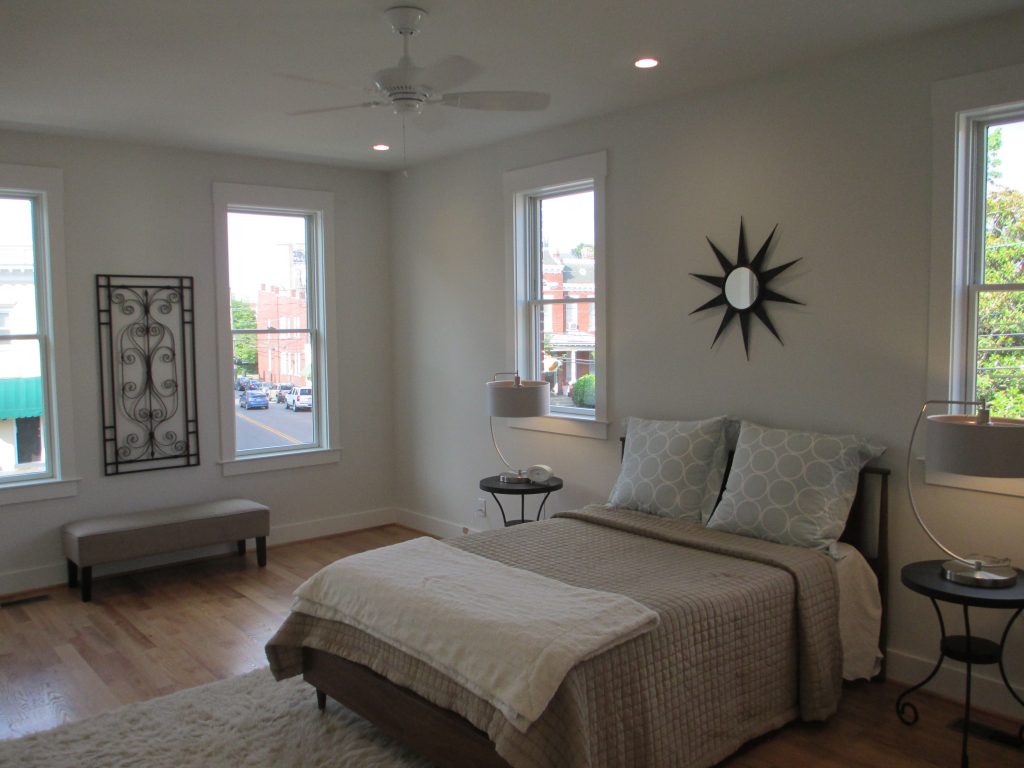 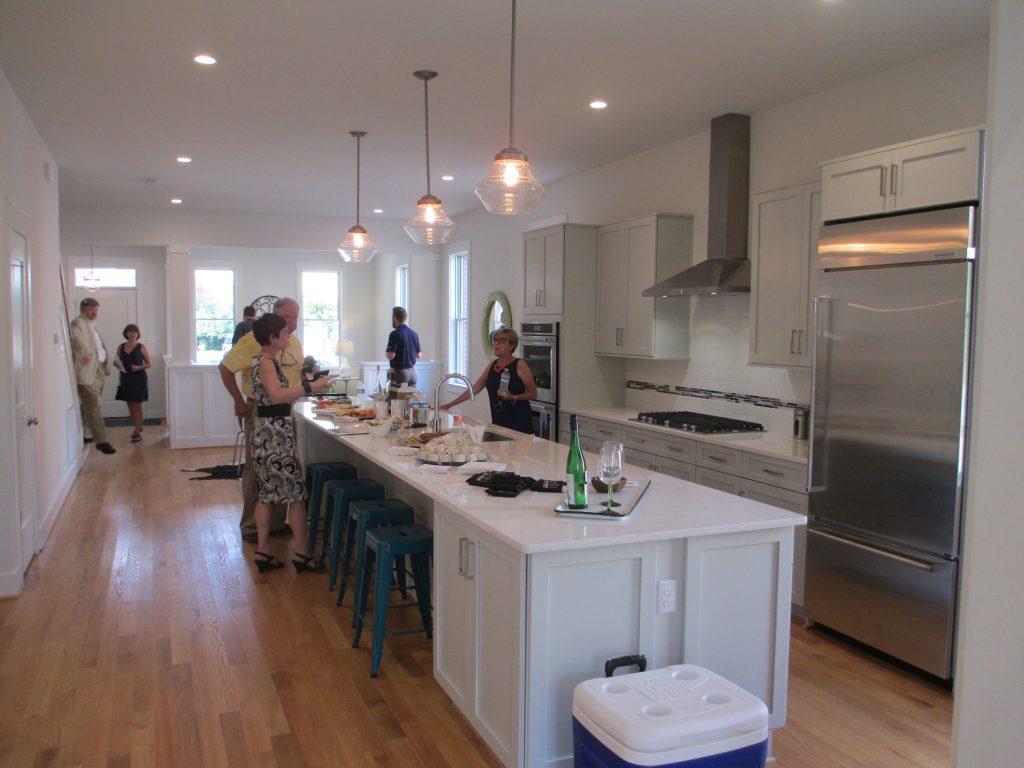 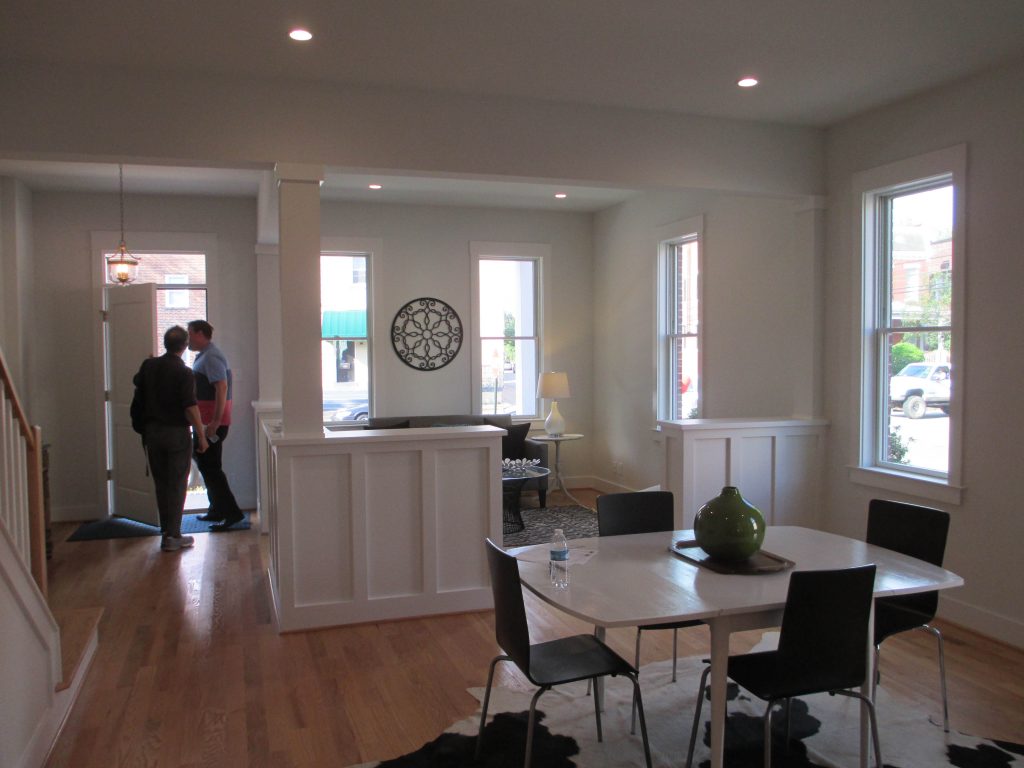 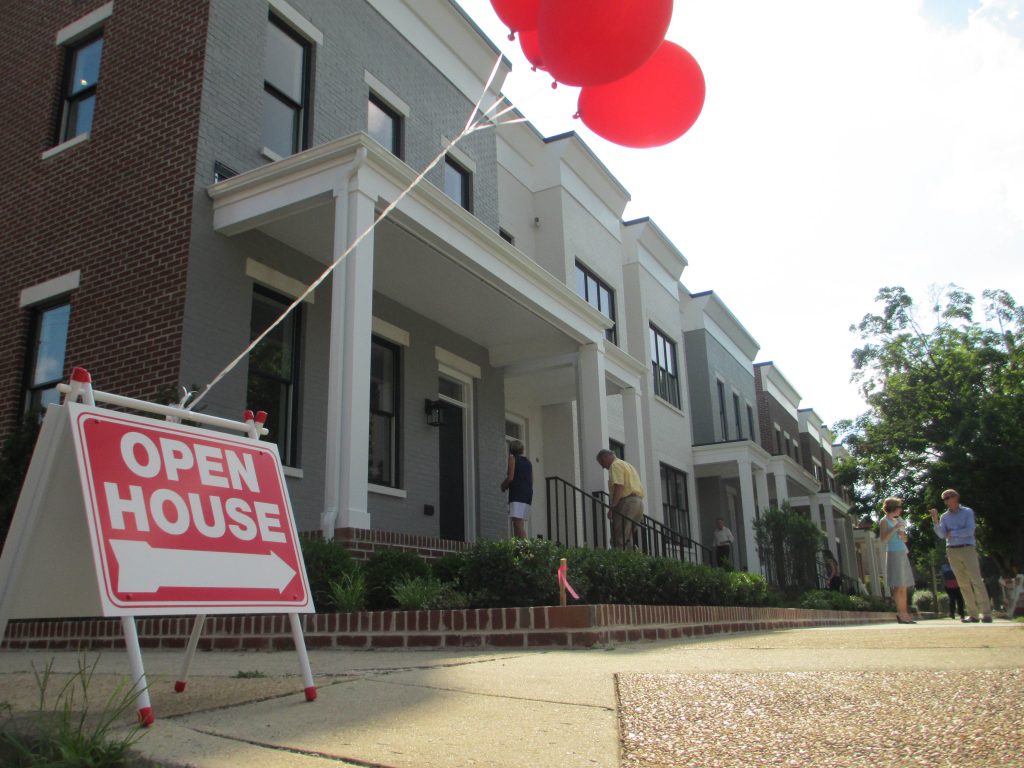 The latest new home construction to hit the Fan is finishing up at North Robinson Street and Kensington Avenue.

Huntt’s Row, a cluster of eight row houses and two condos, held an open house last week to mark the completion of its model, as well as its first sale.

Developer John Nolde III said one of the units fronting Kensington had sold and was slated to close this week. He said interest in the others has been strong throughout construction, which got underway last August.

“It’s coming from people moving to Richmond, people in the Fan wanting a maintenance-free house, and about 40 percent of the traffic coming from the suburbs,” Nolde said, adding that prospective buyers range from young businesspeople to 70-somethings.

The units range from 2,400 to 2,700 square feet and start in the mid-$600,000s. The row houses along Kensington feature varying brick façades, and 510 Architects designed all of the homes. Nolde served as general contractor.

Nolde said construction costs totaled $3.55 million, exceeding his initial projection by $50,000 due to additional foundation work where softer soil was discovered. Some upgraded finishes also added to the cost, financing for which was provided by First Capital Bank, which is now Park Sterling Bank.

(Note: The construction costs reported here have been revised to show that the project went $50,000 over budget. An earlier version of this story reported a larger amount due to a miscalculation of construction and land costs.)

“The weather just crushed us in April,” he said.

Nolde said he was encouraged to do Huntt’s Row by the success of Citizen 6, a modern-design row house development in the 2600 block of Floyd Avenue. Those homes, developed by Bill Chapman, were listed by One South Realty, which is also marketing Huntt’s Row.

Nolde’s next project could involve similar infill development. He’s eyeing another neighborhood property that he said would be a scaled-down version of Huntt’s Row.

Meanwhile, another new home construction project is wrapping up in Richmond’s Randolph neighborhood.

TriBeCa, a cluster of townhomes and detached homes straddling Harrison Street south of VCU, is set to close on the sale of its last unit at the end of the month, said Michelle and Tom Rosman, who partnered on the project with local architect Dave Johannas of Johannas Design Group.

Tom Rosman, a broker with One South Realty, partnered with Johannas through their development group, Pyramid Richmond Properties. The first phase of townhomes on the east side of Harrison was completed eight years ago, and a second cluster along Dobson Street wrapped up last summer, when work got underway on the third and final phase: a row of nine detached homes on the west side of Harrison.

Overall, the project’s construction cost about $3.7 million. First Capital Bank provided financing, and KBS was the builder and general contractor.

Homes in TriBeCa have sold from the upper $200,000s to low $300,000s for three- and four-bedroom floor plans that vary between 1,500 and 1,700 square feet. Two of the nine detached homes were limited to buyers whose incomes were 80 percent or less of the median area income.

While low-income housing projects often involve tax credit, TriBeCa was not part of a tax credit program. Johannas said the company would direct qualified buyers to available grants for down payments.

“We’ve been really happy with this last phase,” Tom Rosman said, noting the homes’ most recent purchasers include a teacher, fireman and city employee.

Michelle Rosman, referring to the development team, added: “It was a relationship we thought would last three years. It’s been 12. We’re excited to be at the end, but it was a great, great experience.”