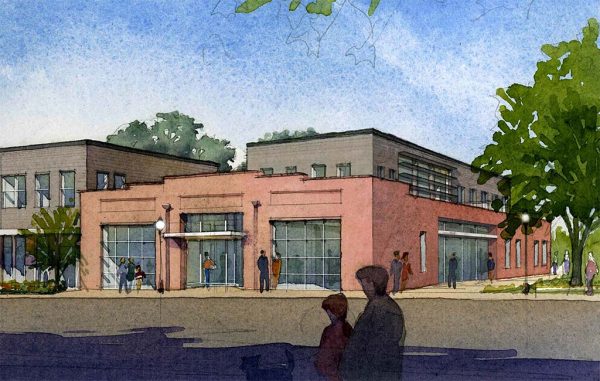 A rendering of the planned development, with 19 apartments, 6,500 square feet of commercial space and a community center facing Patrick Henry Park.

One of Church Hill’s busiest developers is nearing completion of his latest mixed-use project in the neighborhood.

Josh Bilder, with Richmond-based Sterling Bilder, plans to finish work on his Patrick Henry Square project at 313 N. 24th St. by May.

Bilder said the project, which includes upfitting the former Nolde Garage next to Patrick Henry Park, will create 19 apartments, 6,500 square feet of commercial space and an 1,800-square-foot community center facing the park.

Bilder is investing $4 million into the project, which does not involve tax credits.

The apartments are being constructed on the garage building’s second story and on an adjacent parking lot north of the building as duplex-style units. New York-based architect Sebastian Quinn and St. Louis-based Lawrence Group are the project’s designers. 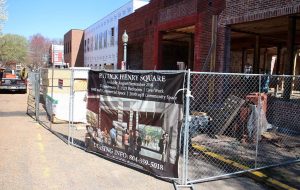 Bilder purchased the property from the City of Richmond in November 2014 for $250,000. As part of his purchase agreement, Bilder must maintain Patrick Henry Park, south of his development along East Broad Street.

“There is still this small-town neighborhood feel up here,” said Bilder, a VCU grad. “Church Hill tells a story about the city that keeps drawing people and investment.”

Before launching Patrick Henry Square, Bilder completed renovations to the nearby East End Theater at 318 N. 25th St. in 2015. With 22 apartments above and beside the Liberty Public House restaurant, the development is 99 percent leased, he said.

Meanwhile, other projects involving infill development are set to add new units in the neighborhood.

Plans call for two one-bedroom, one-bathroom units in the front of the project, with a pair of two-bedroom, two-bathroom units behind them. The ground floor will house a 1,760-square-foot restaurant with about 720 square feet of outdoor patio space where Jessamine and North 23rd streets merge.

Jarreau is teaming up with developer Daniil Kleyman on another mixed-use development at 2411 and 2416 Jefferson Ave. Plans call for 27 apartments and 12,000 square feet of commercial space, including a restaurant.