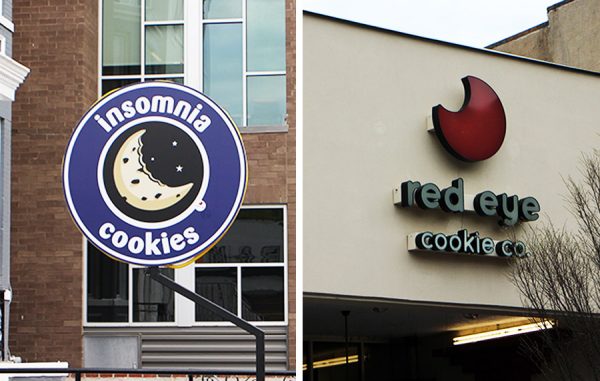 A sugar-fueled legal battle over the late-night cookie delivery market in Cavalier Country has a Richmond company on the defensive.

Locally based Red Eye Cookie Co. this month fired back at a lawsuit brought against it in Charlottesville federal court, denying it has infringed on the trademark of competing national chain Insomnia Cookies.

The case argues that Red Eye’s logo bears too much resemblance to Insomnia’s crescent moon logo, especially visible with stores across the street from one another in Richmond and – as of last month – in Charlottesville.

Red Eye filed its response to the suit March 3, denying the allegations and calling for the case to be dismissed.

Insomnia was founded in 2003 by a University of Pennsylvania student and has more than 100 locations nationwide, including a Richmond store it opened in 2015 at 918 W. Grace St. Red Eye was founded in Richmond by Brayden Pleasants in 2014, initially working out of space it shared with Sally Bell’s Kitchen at 708 E. Grace St., before moving in September 2015 into a storefront at 935 W. Grace St. – across the street from Insomnia.

That year, Insomnia claims in the lawsuit, it sent two letters to Red Eye with concerns about the brands’ similarities. The company claims it received no response from Red Eye.

That dispute came to a boiling point earlier this year in Charlottesville, as Red Eye prepared to open a store on Feb. 18 a block away from Insomnia’s location near The Corner, a popular commercial district near the UVA campus.

“Upon learning of Red Eye’s recent plans to open a second retail bakery in Charlottesville, and in light of Red Eye’s unwillingness to discuss an amicable solution to this dispute, Insomnia was left with no option but to file this lawsuit,” Insomnia’s January court filing states.

Insomnia is asking the court to force Red Eye to stop using the disputed logo design and for an unspecified amount of damages.

Red Eye’s attorney Stephen Faraci of LeClairRyan said in an email to BizSense that the company will “vigorously defend the lawsuit, which appears to be nothing more than an attempt by a large cookie chain to stifle competition in the late-night cookie marketplace.”

An email to Insomnia seeking comment was not returned by press time. No further hearings have yet been scheduled for the case.

Correction/clarification: An earlier version of this story incorrectly reported that Insomnia Cookies opened its Grace Street location in 2014. The company leased that space in 2014, but opened the store in 2015. This report originally said Red Eye upon its launch worked out of a commercial kitchen at 708 E. Grace St. The story has been clarified to show Red Eye shared the full-service storefront with Sally Bell’s Kitchen.

Both of these companies would be wise to conserve resources and drop this dispute otherwise, Amazon is going to settle this for both of them soon. The late night drones will be dropping cookies into the night before you know it.

I need to look up to see if either of these brands have any intellectual property tied to their claims. Personally, what a waste of company financial resources. It’s really about the bigger bully.

As an undergrad I ordered pizza and cheeseburgers. I don’t think cookies would cut it for me late night. Proves people will waste mom and dad’s money on just about anything.