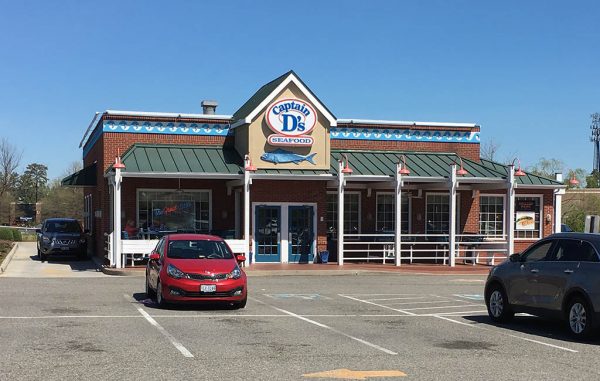 After getting snatched up for $2 million last year, a longtime Short Pump fast food restaurant property that for years has dished out fried shrimp will soon be slinging burgers and milkshakes.

The Captain D’s at 4245 Pouncey Tract Road is set to be converted into a Cook Out location, according to Henrico County planners.

County documents indicate the building’s owner, Charlotte-based Ratcliffe Group LLC, has entered into a purchase agreement with the popular North Carolina-based burger chain for a 20-year lease on the 1.3-acre lot. Cook Out also may exercise its option to purchase the space through its fourth and sixth year of operation, according to county documents.

Cook Out’s lease was effective May 2016, according to county documents. No timeline has been released for Cook Out’s conversion of the space or Captain D’s vacancy of the 3,775-square-foot building.

Both Captain D’s and Cook Out could not be reached for comment Friday afternoon. Captain D’s remains open in the building, which was built in 1999.

Ratcliffe Group purchased the Captain D’s site from Richmond-based CD Restaurants Inc. in May 2016 for $2.1 million, according to Henrico County records.  The site most recently was assessed for $1.8 million. 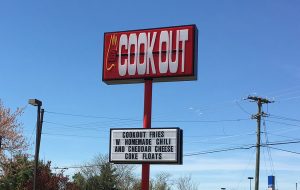 Cook Out has seven restaurants in the Richmond metro area. (J. Elias O’Neal)

Nathan Shor and Reid Cardon, brokers with S.L. Nusbaum Realty Co., worked the deal on behalf of the buyer and seller, respectively.

With a cult-like following, Cook Out is known for its hot dogs and hamburgers, chopped pork barbecue boxes and milkshakes.

Cook Out has been looking to emerge in the Short Pump area since first announcing its expansion into Richmond in 2011.

The Short Pump Cook Out would be the chain’s third location in Henrico County and its seventh in the metro area. Its Henrico restaurants are near the White Oak shopping complex on South Laburnum Avenue and near Regency Square Mall on Eastridge Road. Its other local stores include spots in Mechanicsville, Richmond, Midlothian and Colonial Heights.

Cook Out joins a number of new restaurants coming to Short Pump.

Casa del Barco announced plans in February to open a restaurant in the recently closed second-story Tara Thai space in the Macy’s concourse. It will join Healy’s Boathouse restaurant on the mall’s first level.

In January, World of Beer confirmed plans to take over the building once occupied by TGI Friday’s at 11600 W. Broad St. in the Downtown Short Pump Shopping Center.

And the former Applebee’s at 11780 W. Broad St. closed in October to make way for the region’s second Cava Grill.