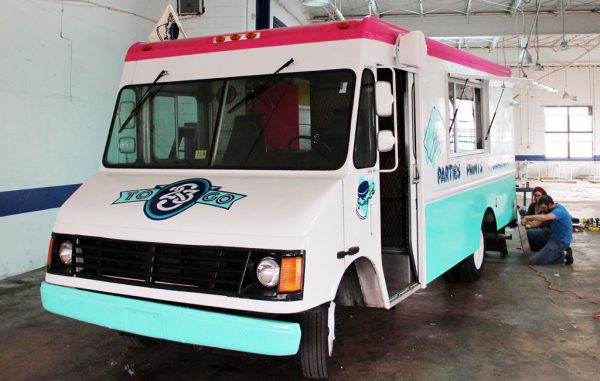 Studio Two Three rolled out its new mobile printing truck over the weekend. The organization refurbished a 1999 GMC Savana to look like an old ice cream truck, but instead of handing out soft-serve, they’ll be screen-printing and printmaking.

Executive director Ashley Hawkins said the truck – dubbed S23 To-Go – will be used as the organization’s literal vehicle for outreach. It made its maiden voyage at the Earth Day celebration in Manchester.

“We want to use it to connect to communities who can’t reach us otherwise,” Hawkins said.

Hawkins said the company spent $80,000 to acquire, renovate and outfit the truck, and spent an additional $35,000 for staffing and other expenses for a year of operation. The work was handled by Jake Urbanski, an artist and Studio Two Three board member. 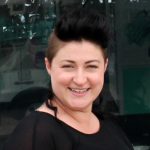 S23 To-Go is being funded through grants from the Windsor Foundation, Culture Works and the Golden Rule Foundation of $30,000, $15,000 and $9,000, respectively. Hawkins said it also received donations through an IndieGoGo campaign, and from local individuals and businesses such as Chop Suey Books and Blackwood Development Co.

Hawkins added the studio plans to take the truck to Title I schools, festivals, private events, corporate team-building events and more. She estimates the company will reach 15,000 new people through the truck alone this year.

And while the artistic nonprofit can now be spotted wheeling around town, it’s also expanding its brick-and-mortar operation.

Studio Two-Three is leasing an additional 6,300-square-foot space connected to its headquarters at 3300 W. Clay St.

The space formerly was occupied by Delta V Motorsports, which vacated last November. Hawkins said the studio is preparing to sign a 13-year lease with an additional five-year option this week.

Campfire and Co. is designing the new space, with Monument Construction as the builder and Mary Lorino of Loch Design as the architect. 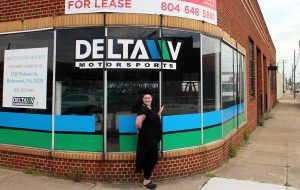 Studio Two Three has 20 studios that it rents out to local artists. The new space will install 10 new studios, a coffee station, open event space and more.

Hawkins said it’s investing about $150,000 into the new space, which she hopes to have ready by September.

This isn’t the first time Studio Two Three has gone looking for more room. In early 2015, it left its digs at 1617 W. Main St. in the Fan for more room in Scott’s Addition.

Hawkins said about half of Studio Two Three’s income is from earned revenue, through memberships, classes, exhibitions and retail. Its annual operating budget is $750,000, up from $200,000 in 2014.

Among Studio Two Three alums are Nikko Dennis, who learned to screen print at the studio and has gone on to start his own downtown screen-printing business, Navy Hill Co.