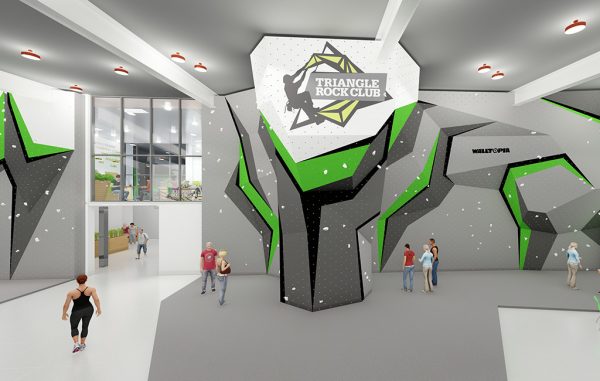 A rendering of the planned rock-climbing center at 4700 Thalbro St. (Triangle Rock Club)

A chain of North Carolina climbing gyms is ascending north into the Richmond market.

Triangle Rock Club is set to open its first location outside the Tar Heel State at 4700 Thalbro St. in Henrico, in the former Richmond Athletic Club building.

The company, which has three locations in North Carolina, plans to finalize its purchase of the 24,000-square-foot building in early June, and will begin demolition and renovations immediately after. Dubbed Triangle Rock Club RVA, the location is planned to open in late 2017.

Managing partner Joel Graybeal said after rapid expansion in North Carolina through 2013 and 2014, the company started thinking of other markets.

“We drew a three-hour radius from Raleigh and started digging around for opportunities,” Graybeal said.

The renovations and real estate acquisition is expected to cost around $2.8 million.

“Boykin and Andrew Kratz, one of my partners at TRC, were high school classmates at Hargrave Military Academy,” Graybeal said. “A 30-year friendship facilitated the connection for us.”

The numbers for the Richmond area painted a pretty picture for TRC.

“If I look at total project cost, about 20 percent of the total cost is for upfit. Normally we spend a bigger number on that,” Graybeal said. “And on a per-square-foot cost to buy the building, it’s coming in less than our Raleigh-area locations.”

M.L. Bell is the general contractor, with Bruce Perretz of Perretz & Young Architects as the designer. SunTrust is financing the project.

TRC will take over the old RAC building from Threee Properties LLC, which purchased it in 2013 and leased it to a local nonprofit.

Triangle Rock Club isn’t the only climbing gym going vertical in town. Peak Experiences, which has had a gym in Midlothian since 1998, is building a second location at the Sports Center of Richmond (SCOR) building in the city.

“The sport is growing,” Graybeal said. “It doesn’t appear to us to be a trend. It’s a very social experience. It’s a do-with-a-buddy thing.”