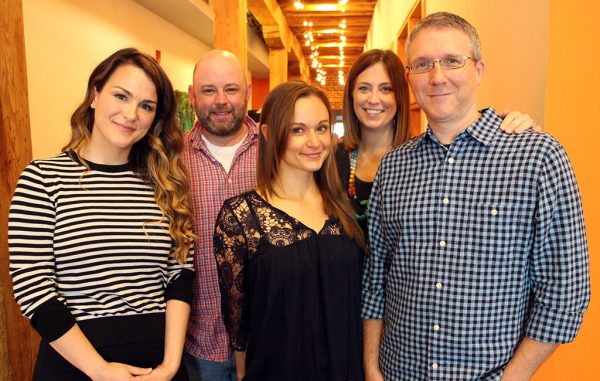 Last year, it was Hue & Cry that turned heads with its run of awards at the annual Richmond Show. This year, it was another new name to the show that made waves, picking up the top prize in the ad awards’ production category.

The motion design firm had been in business three years, made up of partners and co-owners Shannon Honaker, Ruth Newberry, Amanda Russell and Dave Swain. But the Cream team, which also includes executive producer Joanna Recinos, had never submitted work for the annual awards put on by the Advertising Club of Richmond.

“That was a great surprise,” said Russell, who met Newberry when they were both in the former Media General’s broadcast department. Honaker and Swain go back to VCU and worked at NBC12 before collaborations on freelancing jobs led them all to team up and form their own studio.

Describing themselves as equal business partners and friends, the four principals of Cream collaborate on all of their projects, using a “copilot” system where one serves as creative lead on a project and another serves as a second, to help bounce ideas off and develop them.

Richmond BizSense recently sat down with Newberry and Swain, the creative lead and second respectively on their award-winning piece, to discuss Cream’s creative approach, the inspiration for that digitally-created video and how they come up with their ideas. The following is an edited transcript:

Richmond BizSense: How did you come up with the concept for the Richmond Forum video?

Ruth Newberry: We started out looking at the past speakers. Knowing that the topics that they’re covering really matter, I wanted to address that more than the person who was speaking, which the previous Forum open had. We started making a list of topics that had been covered and those that stuck out and could be translated visually, and then it was just trying to connect those pieces.

The style, we looked at a lot of different references. I originally wanted something more colorful, but in the end, with the music and the script (by Carlos Chafin of In Your Ear Studios and Richmond Forum executive director Bill Chapman, respectively), it all felt like it needed to be more serene so that you could take in what you’re seeing a little bit more than having something more erratic, more vibrant. We wouldn’t have been able to focus the viewers’ attention.

How the objects were coming up out of the flatness of the floor or being pushed into the floor – we wanted to talk about how people, when they go into the forum, they’re coming with their own preconceived notions and how we’re going to build on those or we’re going to take away from those so we can build something new.

RBS: Describe your creative process. How do you approach a new project?

RN: A client will come to us with a project, they’ll either have a script or they won’t. If they don’t, then we sit down and talk with them about what they want to get across, what is their goal with this piece. We’ll bring in a scriptwriter to help us shape that, because none of us are skilled at that.

After we have the script hammered out, we all get into a room together if it’s a big enough project. If it’s a smaller one, we have what we call the copilot program. Dave was my copilot on Forum, so he’s my second – that’s someone who you can bounce ideas off of in the beginning and form what we call a visual treatment, what visually is going to happen. Then we do a mood board, which is when we’re researching and putting style to it. That can be anything from a color scheme to pictures that can fill out a mood, sometimes music can be included.

DS: Ultimately you’re telling some kind of story, whether it’s the story of someone’s company or their service or product. You might start with a script – usually that’s the starting point – then we sit down and figure out in a very general sense how do we visually represent all of these ideas, how do we do it in a hopefully unusual, creative way – not the most predictable way.

RN: That’s one of the strengths of having four experienced animators in a shop: we can all get together and kick around all these ideas and rework the ideas, and as you’re going through the process, at any stage you can put your heads together and figure out what the better solution would be.

RBS: What do you look to for inspiration? Do you have creative stimuli you lean on?

RN: We’re always looking at what’s out there. We’re on Vimeo, or we’re sending each other links to music that we really like, or if I go to a show of some sort, I’m taking pictures of the set design because I want to share it with everybody. I’m a big pinner on Pinterest. I have like 5,000 pins at this point.

DS: We’re always looking at work from other studios. Sometimes that’s to get some inspiration, sometimes it’s just to drool over it.

RBS: What local shops do you look to or whose work you admire?

DS: There’s a few studios in town that do generally what we do. There’s Mondial, Hue&Cry, MadBox. Mondial has a really cool, gritty aesthetic.

RN: Cream was one of about 5,000 options we came up with. A lot of the others were pretty bad, and some we have on the back burner for future endeavors. For the studio, we ultimately wanted something direct and memorable. There are the obvious associations like cream rising to the top, but we more liked the notion that cream tends to make everything better. It creates a richer, more satisfying experience. We like to think that through motion design, we offer our clients a rich experience that adds a compelling visual layer to their message.

RBS: Have you ever had a project that was the one that got away – that for whatever reason, you weren’t able to realize your vision or complete the project?

DS: We had a client, a radiology practice, and had done some work for them. A freelance art director they worked with wanted to do a piece for Breast Cancer Awareness Month. We sat around and hashed out what we thought was a pretty solid idea – a cheeky approach to this, something lighthearted that would also get someone’s attention and then ultimately raise awareness. They liked it, but it didn’t pan out. I think it was more of a timeframe issue.

RN: It was, because they came to us in early August, and Breast Cancer Awareness Month is October, so by the time we got through all the approval stages, we worked well into October, and it just wasn’t going to happen.

DS: We really liked the concept, and when that time of year came around the next year, I went to our contact and asked them if they wanted to do this. Something happened where they just weren’t going to do this, and we were like, “Well, we like it; we’re going to produce it.” So we just produced it for ourselves.

The Richmond Forum video is a beautiful piece of work.