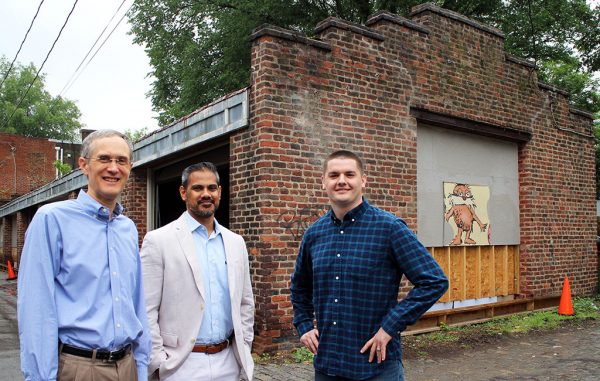 A local attorney’s real estate side gig is giving new life to a 19th-century structure in Jackson Ward.

The 2,500-square-foot brick structure is behind a residence at Henry and West Marshall Street that Som rents as a duplex. An in-house attorney for SunTrust Bank, Som purchased the property in 2014 with his wife and fellow attorney Jessica Selway for $320,000, city records show.

Som said they purchased it as an investment while living in Northern Virginia. He said he found the property online after visiting friends in Richmond and seeing potential in the rental market around VCU.

“As we were becoming more acquainted with Richmond, we liked the neighborhood so much we actually just moved down to Jackson Ward and bought our own house too,” said Som, whose residence is a few blocks east. 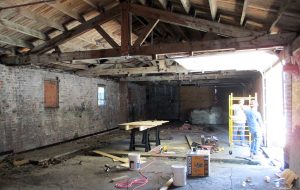 The original trusses and brick walls will be incorporated into the apartments’ design. (Jonathan Spiers)

Som and Selway continued renting the garage to a tenant who had been using it for storage. When that tenant moved out, Som said they had a difficult time finding a new tenant, prompting the idea to turn it into apartments. He’s developing them through an entity called NAS 2011 Investments LLC.

“We know that Jackson Ward is growing and there’s a lot of demand for more modern, efficient, comfortable spaces,” he said. “That’s what we wanted to make out of it.”

“We’re trying to put together a product that’s higher-end finishes and solid design and construction, almost commercial-grade, so it’s something that lasts for a long time,” Som said. “I wanted to put something in there that had a sense of continuity, where people can come here in 10 years and say, ‘I used to live there when I lived downtown.’”

The units will range from 780 to 830 square feet and will each include a kitchen with an island, a bathroom, gas heat and new electric and utilities. Other work will include converting the building’s garage doors into storefront-style entries, adding exterior lighting, improving sidewalks and curbing, and pouring a concrete floor.

As the rehab is a historic tax credit project, the building’s exposed brick will be preserved on the end walls and its original trusses will be maintained and featured in the design, Som said. He said the units will rent between $1,100 and $1,200 monthly.

Som is putting $370,000 into the project, with financing provided by Virginia Community Capital and loan officer Bill Greenleaf.

Save for the trusses and brick walls, Sevinsky said the project is “a complete rebuild,” as the building doesn’t have plumbing and other infrastructure needed to convert it to dwellings. He said rezoning was required to allow for the dwellings, which he’s working on with subcontractors such as Chesterfield-based Fast Glass, Henrico-based Mechanical Solutions and Hanover-based B & B Electric.

“The roof is historic; the façade, obviously. All that stuff has to stay and get refurbished,” Sevinsky said. “There’s quite a bit of preserving what’s there and implementing the new with the old.” 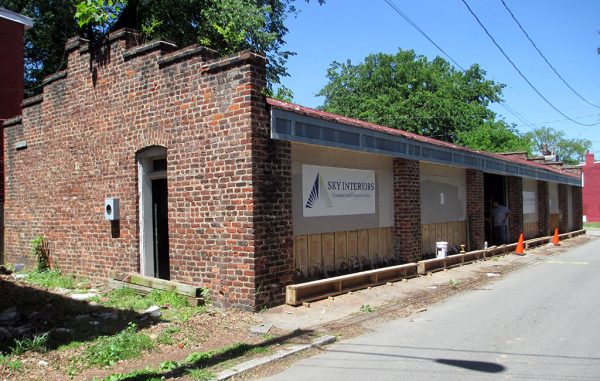 The garage along Henry Street behind a home facing Marshall Street. (Jonathan Spiers)

A Virginia Tech grad, Sevinsky said he broke off from Hourigan to start his own firm after seeing smaller projects the larger company passed over.

“We would constantly get these opportunities to bid small restaurants, boutique offices, but they were just too small,” he said. “We couldn’t really be competitive compared to some of the smaller outlets in town.

“I kept looking at all these great opportunities and cool people who need projects, but we just couldn’t touch it. I said, ‘I’m going to chase these and service this market.’”

Sevinsky is leasing a 700-square-foot office space in the back of ad agency 93 Octane’s home on East Grace Street. He said he expects to make hires, including project managers and office support.

While the Henry Street apartments are his first foray into real estate development, Som said he plans to continue developing properties in Richmond and working with Sevinsky and Fultz & Singh, who also are working together on the Richmond Food Co-op project with local architecture firm Sunflower Studio. Sevinsky said his work on that project totals $900,000, while his construction cost for Burger Bach is $600,000.

The Henry Street apartments add to other historic rehabs and new construction in Jackson Ward that are bringing more rental stock to the neighborhood. Work is underway to convert a century-old former Masonic lodge on West Leigh Street into 15 apartments, while farther east, a five-story, 167-unit apartment building is planned on East Marshall Street.

First time, but not likely a last time, developer. It’s addictive. This is just another example of the use of historic tax credits and city real estate tax abatements to the continuing turnaround of the City. It’s happening from Union Hill to Scott’s Addition, from Brookland Park to Manchester, from Monroe Hill to Carytown. The tax base of the City is growing phenomenally.

Well, this is a very creative project. You take a single family building that was broken in to two units at one time. You now take the garage and add 6 tenants. What was a single family property now houses 12 people with no green space, or parking. Can any residential garage in the city now be convented to an apartment? Where will these people park, or let their dog poop? There will be three units with three cars, plus the duplex in the front with 2-4 cars. The property has no parking at all and it gets tighter all… Read more »