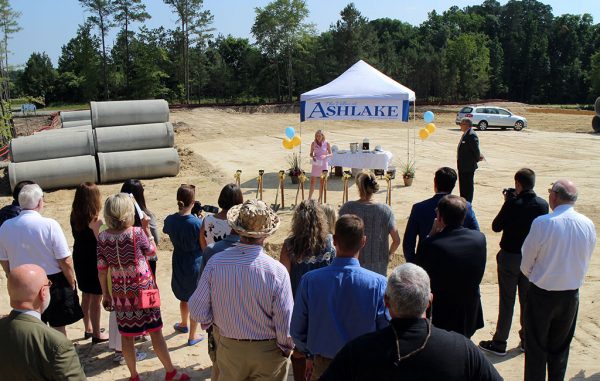 A local homebuilder is extending its focus on the 55-and-up housing market south of the river.

Henrico-based Cornerstone Homes broke ground Thursday on its newest age-restricted community in Chesterfield County, where the company also is preparing to expand its Villas at Magnolia Lakes development.

Cornerstone owner Roger Glover was among those shoveling dirt in Thursday’s ceremony to kick off the Villas at Ashlake, an 82-unit development at Ashlake and Ashbrook parkways south of Hull Street Road, near Hancock Village Shopping Center and across from the Woodlake community.

The single-level homes, a dozen of which have pre-sold, will be identical to Cornerstone’s Villas at Magnolia Lakes in Chester – a collection of duplex and four-plex homes planned to total 110 by yearend. Started in 2015, Glover said all but five of the Magnolia Lakes homes have been sold.

A second wave of the Villas at Magnolia Lakes is planned on 18 acres just west of the first phase. Named the Cove at Magnolia Lakes, the $16 million development is on this month’s agenda for the Chesterfield County Planning Commission, which will consider a requested rezoning and conditional-use designation. It will comprise 50 detached single-family and attached duplex homes.

Should the project secure approval, Glover said site work on the Cove would begin by yearend, with construction starting next spring or summer.

The Cove homes will range from 1,700 to 2,400 square feet and start in the low to mid-$300,000s. Like the villas next door, they’ll feature single-level living, with ground-floor master bedrooms, wider doorways and wheelchair accessibility.

Site work for the Villas at Ashlake is underway on about 20 acres along Ashlake Parkway that Glover purchased last year for $1.25 million. Glover estimates the development at $18 million and aims to have the first homes constructed by the end of this year.

Homes at Ashlake will range from 1,550 to 2,300 square feet and start in the high $200,000s, with options for bonus suites. Like Magnolia Lakes, Ashlake will include a clubhouse with a pool and fitness center, walking trails and community gardens designed by Sean Sheppard of locally based Backyard Farmer. Glover said Sheppard will stay on for a year as a consultant, tending the gardens and leading farming classes for residents. 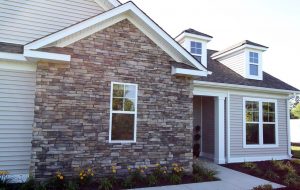 A sample Villas at Ashlake home, which will range from 1,550 to 2,300 square feet. (Cornerstone Homes)

Farming is also central to another Cornerstone project in the works in Hanover County. Chickahominy Falls, a nearly 400-home development on 180 acres, received approval last year but has been slow to start due to site work related to extending utilities. Glover said he expects to close on the land next month and hopes to start development later this year.

Cornerstone also is preparing to develop Barley Woods, a 124-home age-restricted community on 45 acres in Fredericksburg.

Glover said The Crescent Group would serve as Cornerstone’s land development manager but also provide development services to other builders.

“We’re at the point now where, in Richmond and Fredericksburg, at the end of this year we’ll have four projects going with a total of 700 homes to be built,” Glover said. “We really need Cornerstone Homes to focus exclusively on building the homes and taking care of the homeowners and the buyers, and The Crescent Group will focus on pulling these communities together.”