The 55-and-up housing market is keeping local builders busy, with one firm making its first appearance in western Henrico and another reaching as far north as Fredericksburg for its latest project.

As Bel Arbor Builders and StyleCraft Homes go forward with their latest senior-specific projects, Richmond-based Cornerstone Homes is looking north for its latest so-called “active adult” community, returning to Fredericksburg for its second community there.

Cornerstone is starting on a 124-home age-restricted community called Barley Woods, on 45 acres at 5223 Plank Road in Fredericksburg. Development is starting 10 years after Cornerstone put the property under contract, ultimately paying about $2 million at closing.

President Roger Glover said the project came about from Cornerstone’s first foray into Fredericksburg: a comparable community called Regency Park Villas. When that community was developed in the mid-2000s, Glover said he was approached by a nearby landowner who inquired as to whether he was in the market for more property.

Another owner offered an additional 13 acres, bringing the total acreage for Barley Woods to 45. But the economic slowdown kept the project from going forward, providing time that Glover spent conducting market research that he said showed a demand for a slightly different product. 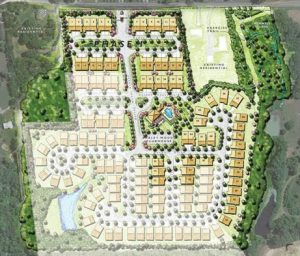 Cornerstone modified its plans for Barley Woods and sought new zoning to allow for the single-story villa-style homes, all while maintaining its original purchase  agreement with the landowners, Glover said.

The owners, he said, “stuck with me and also stuck with the price, which was key.”

He said the 55-and-up housing market had changed in that 10-year span, from what he described as a more homogenic group whose housing choices were less varied to one with subgroups in which more choice is desired.

“Over the last five years, I’ve noticed that with so many people reaching retirement – so many boomers looking to downsize and move, maybe for their last time – it’s a much broader group and there are many different segments within the 55-plus market now,” he said.

Those differences include different floor plans, architectural styles and price points than some of Cornerstone’s Richmond-area communities. Like the company’s Villas at Magnolia Lakes in Chester, Barley Woods will include a clubhouse with pool and preserved natural areas. But unlike Magnolia Lakes, the single-level homes will not include Cornerstone’s frequent four-plex designs, which Glover said have proven desirable in other markets but less so in Fredericksburg, according to data he commissioned from research firm Market Perspectives.

The two-bedroom homes will range from just under 1,700 to nearly 2,200 square feet, with pricing starting at about $285,000. Construction will start by the end of this year, with the first homes and the clubhouse, designed by Richmond architecture firm Johannas Design Group, coming online in late spring.

As it starts on Barley Woods, Cornerstone is also progressing on other 55-and-up communities in the Richmond area, including the Villas at Ashlake in Chesterfield and Chickahominy Falls in Hanover County. 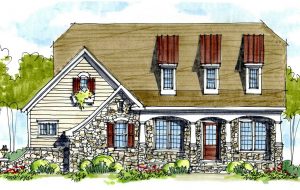 Bel Arbor purchased the 3.3-acre property from Gayton Properties LLC, which is developing the site and the nearby Manorhouse North Gayton facility – a 10-acre, $20 million facility by Manorhouse Assisted Living that is set to open at 13500 N. Gayton Road next year. Bel Arbor paid $1.35 million for the land in January, according to county property records.

Bel Arbor president Joseph Hill said Burleigh is the company’s first presence in the Short Pump area. The company has focused primarily on Chesterfield for the bulk of its maintenance-provided, 55-and-up communities, such as Bel Arbor, Bel Crest and sections in Hallsley and Magnolia Green. Hill said Burleigh presented the right fit for the company to bring its product to Richmond’s northwest quadrant.

“It kind of plugged in that northwestern location we were missing,” Hill said.

The nine condo homes will start in the $600,000s and feature first-floor masters and brick or stone siding. Hill said the county required the homes to be age-restricted because of their proximity to Manorhouse, which will offer both assisted and independent living.

Hill said the developer reached out to Bel Arbor to be the builder for Burleigh, which has started accepting reservations from buyers and will build the homes as the sites are purchased. Long & Foster’s The Beran Group is representing Bel Arbor in the sale of the lots. 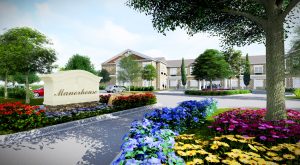 Manorhouse North Gayton is in the works in the Short Pump area. (Rendering courtesy Manorhouse)

While only nine home sites, Hill said Burleigh is worth the company’s investment for its location – between Short Pump and established, higher-end neighborhoods such as Foxhall and Granville South.

“The No. 1 attractor for us was location,” Hill said. “What we have found in doing these developments is people really want to stay local. Their social network is local, their community activities are local. So the feeder neighborhoods around these sites are usually important markets for us.”

StyleCraft Homes’ Mitchell Bode also stressed the location factor in regard to selecting age-restricted, maintenance-provided projects. The Lakeside-based builder is currently planning its 128-townhome Pocoshock Green development in Chesterfield and seeking approval for a 62-home project on Courthouse Road that would likewise be targeted to empty-nesters and retirees.

“It matters where these projects are located, because they need to be close to grocery stores, hospitals – that sort of thing,” said Bode, StyleCraft’s director of land acquisition and development. He said the emphasis on housing for the 55-and-up market is driven by a growing demand, and a shortage of supply.

“We’ve had two projects in recent years – Villas at Rose Hill and Villas at Archer Springs – that have taken off in terms of success because of this pent-up demand,” he said. “There’s a lot of demand for that, and we’re seeing it in all these communities.”

Demographers predict a 15 year span of growth in senior housing which includes all types, hence the spurt we’ve seen locally in construction of new assisted living and memory care communities. REITs have joined the fray as well, and we’ll soon see more rental apartment communities that target the 55+ age set.