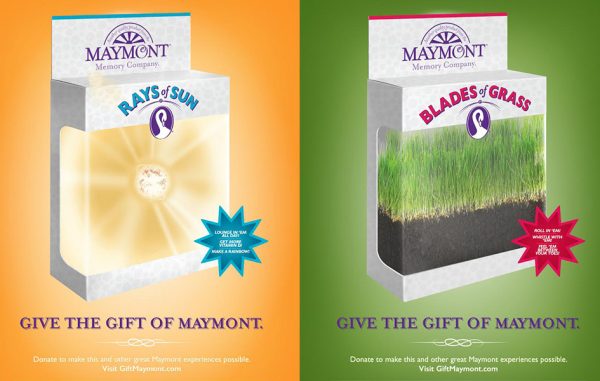 The local ad agency behind an award-winning campaign for the VMFA is turning its attention to another Richmond institution.

Downtown-based ndp is rolling out a billboard and poster campaign for Maymont, which is looking to raise awareness of its “Spirit of Generosity” capital campaign and solicit donations from visitors and the public.

The campaign – described as the first of its kind for the free-admission, 19th-century estate – plays on Maymont’s history as a gift to the city from James and Sallie Dooley by encouraging the public to “Give the gift of Maymont.”

Posters to be displayed at Short Pump Town Center advertise gift boxes from the fictional “Maymont Memory Company” containing Maymont-specific items and experiences, such as skipping rocks at the Japanese Garden koi pond and blades of grass on Maymont’s rolling hills.

Billboard ads promote such deals as “Free Vitamin D with every visit!” and “Get one grass-stained knee, get another for free!” alongside the capital campaign website, where donations can be made and more information is available. Donors receive a campaign sticker as thanks for their donation.

Jimmy Ashworth, ndp’s executive creative director, said the campaign aims to encourage donations by capturing the experience and nostalgia of Maymont with people who might assume it’s funded by the city or the nonprofit Maymont Foundation.

“Our strategy was: let’s re-gift Maymont,” Ashworth said. “Those memories that we had, let’s pay that forward to future generations. How do you package memories? That’s the onus of the campaign.”

Ashworth said the Maymont Foundation approached ndp – CEO Danny Fell is on the foundation’s board of directors – for help with its capital campaign, which he said was struggling to attract donations. The $35 million campaign, Maymont’s first major capital raise since the 1990s, is about 85 percent toward achieving its first-phase goal of $26.5 million, said Anne Du Bois, Maymont’s director of advancement and development.

Du Bois said the ads aim to reach people who haven’t visited in a while or haven’t thought about donating. While she doesn’t expect them to close the campaign’s gap, Du Bois said, the ads will help raise additional funds and change perceptions about the estate. 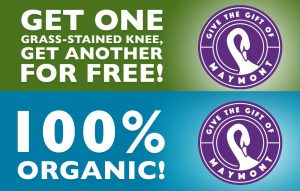 Billboard ads included in the campaign.

“We want to break open the campaign out to the community and attract the $50, $100, $200 donation,” she said. “So many people have no idea we’re not funded by the city, and when they learn the story, they’re so much more likely to support us. This is to get the story out there and realize they have memories of Maymont.”

Du Bois said it costs between $11,000 and $12,000 daily to keep Maymont open and free to the public. Suggested $5 donations are accepted from the 550,000 visitors Maymont attracts annually.

Funds from the capital campaign have paid for the recently reopened animal farm – a $3 million project that included the addition of two classrooms – and new windows for Maymont Mansion, among other projects. Remaining needs include updating exhibits in the Robins Nature & Visitor Center, and converting an adjacent, recently purchased residence into a headquarters for staff, who are spread among several of Maymont’s historic buildings.

Du Bois said Maymont’s ad budget is minimal and relied on the pro bono work from ndp. She said Maymont spent upwards of $50,000, funded through a gift, on other campaign costs and media buys through locally based Lewis Media Partners.

It is the latest local pro bono campaign for ndp, which won awards for its multimedia campaign in 2015 for the Virginia Museum of Fine Arts’ Japanese tattoo art exhibit. That campaign kicked off with the “tattooing” of ndp’s building at 1 E. Cary St. with a mural by a Japanese artist.

The agency is preparing to move to Scott’s Addition, where it will set up its new headquarters at 2912 W. Leigh St in the fall.

You get what you pay for, I guess.