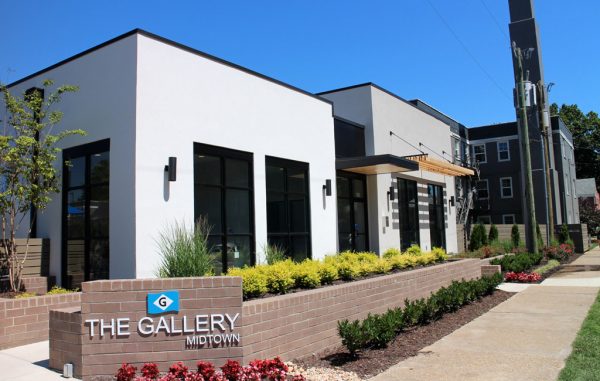 Spy Rock completed construction of a clubhouse and swimming pool at The Gallery Midtown. (Jonathan Spiers)

Two years after picking up an imprisoned Richmond landlord’s real estate holdings, a local development company’s efforts to turn those properties around are on full display in the Fan and Museum District.

Spy Rock Real Estate recently wrapped up work on nearly two dozen apartment properties that made up the bulk of Billy Jefferson’s River City Renaissance portfolios, which Spy Rock and Boston-based Davis Cos. purchased for $37.35 million in a 2015 auction.

After selling six of the 29 properties, Spy Rock renovated the remainder of the portfolio, comprising a total of 376 units scattered among properties in the Fan and Museum District and rebranded as Midtown Apartments.

The effort recently was capped off with the completion of a clubhouse and swimming pool at The Gallery Midtown, a 157-unit complex between Hanover and Stuart avenues and North Thompson and Nansemond streets previously known as River City Court. The remainder of the portfolio, 219 units among 20 buildings throughout the Fan and Museum District, were grouped and branded as The Collection Midtown.

Spy Rock principals Andrew Basham and Taylor Williams said the clubhouse marks an endpoint for the renovation work, which they said wrapped up in the first quarter of this year. The clubhouse and pool – the only swimming pool associated with an apartment community in the Fan and Museum District, Basham and Williams said – opened to residents of all of the Midtown properties around Memorial Day. 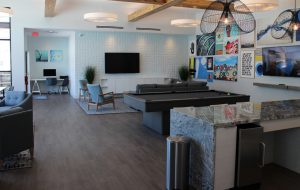 “The clubhouse is sort of the icing on the cake for us,” Basham said. “It was something that we felt was important to distinguish the whole portfolio and really demonstrate that it’s not the same property that it was before.”

Designed by Johannas Design Group and built by Leipertz Construction, the 3,700-square-foot clubhouse includes a fitness room, a lounge with beer taps featuring local breweries, a billiards table, and fitness classes and weekly events for residents. Basham put the cost of the clubhouse at $800,000.

The apartments are managed by Steelhead Management, which also manages Spy Rock’s The Preserve in Scott’s Addition.

The Gallery consists of one- and two-bedroom units that rent between $1,100 and $2,000 per month. The Collection units range from one to three bedrooms with similar monthly rents.

Basham said the apartments are about 83 percent leased – an improvement from the properties’ 30 percent vacancy rate when renovations started in mid-2015.

“We got down to a pretty low occupancy rate across the portfolio when we moved the legacy residents out,” Basham said, adding that previous residents were given an opportunity to remain in the properties but some chose to leave. Those that chose to stay were moved among properties during the renovation process.

Basham wouldn’t say how much money was put into the renovations overall. Minus the $6.36 million received from the sale of the six unloaded portfolio properties, the Midtown properties totaled a purchase price for Spy Rock and Davis Cos. of just under $31 million.

The Midtown properties add to a slew of apartment renovations and new construction taking place in the Museum District.

Two blocks north from The Gallery, Oliver Properties is wrapping up construction of its 50-unit Carytown Crossing complex at the crossroads of Thompson Street and Patterson and Kensington avenues. In between the two, the 106-unit Kensington Place, also owned by Oliver Properties, has been undergoing a multimillion-dollar renovation of its grounds and exteriors.

Farther north along Thompson, work is underway on Snipes Properties’ The Meridian, a cluster of eight modern rowhouses at Thompson and Cutshaw Avenue.

Why do developers and investors insist on calling things “Midtown”? Richmond doesn’t have a midtown, and the three projects that I know of using this designation are nowhere near each other. This one is in the Museum District. Why not “The Gallery Museum District”?

Call it what they want if they’ll do the improvements they’ve done on their own dime!

Thank you Spyrock and Oliver for improving our Museum District and ridding it of the Jefferson mis-management legacy.