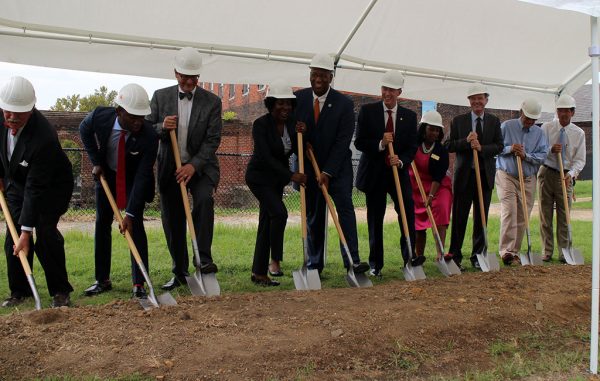 Fresh off selling one of its downtown properties to VCU, a local museum is ready to bring a $25 million addition to the riverfront.

The project first was announced in 2013, coinciding with the merger of the American Civil War Center and the Museum of the Confederacy. It’s part of a $48 million expansion for the museum, $39 million of which has been raised from donors.

The new facility is slated to be complete in early 2019.

Monday’s ceremony follows the organization’s sale this summer of its building and part of its land at 1201 E. Clay St. to VCU for $6.25 million. VCU Health will lease the building to the ACWM for two years, until the completion of the Tredegar facility. After that, VCU will consider the 31,000-square-foot building as a possible training or administrative space. 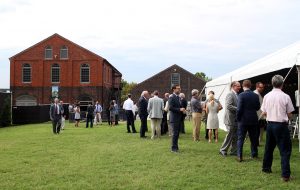 The 29,000-square-foot facility is under construction at Historic Tredegar. (Mike Platania)

“As the capital of this great state, we stand as the center of all things arts, history and culture in the Commonwealth of Virginia, and with that comes a great responsibility,” Stoney said.

“I love the fact that the American Civil War Museum has always taken the lead in being responsible about telling the entire truth – the complete truth – of our history.”

State Secretary of Commerce and Trade Todd Haymore spoke on the economic impact museums and tourism have on the state.

“Here in Richmond, about 7 million visitors every year come in generating over $2 billion in revenue and 23,000 jobs associated right here in this area,” Haymore said.

3north is the architect of the project, with architect Madge Bemiss acting as project manager. Whiting-Turner is building the facility, with The Wilton Cos. as construction manager.

Originally planned for a 2015 opening, Rawls said the project was delayed after reconsidering the design and placement of the building.

“It’s an amazing architectural design, and it was worth the delay to get the design we got. It fits into the historic landscape of the site. It was worth it to take our time and get it done right rather than rush it,” Rawls said.

He said the funds raised that don’t go into the new museum will go toward other needs at ACWM, including improvements to its Appomatox museum, White House and Museum of the Confederacy and endowment and reserves.