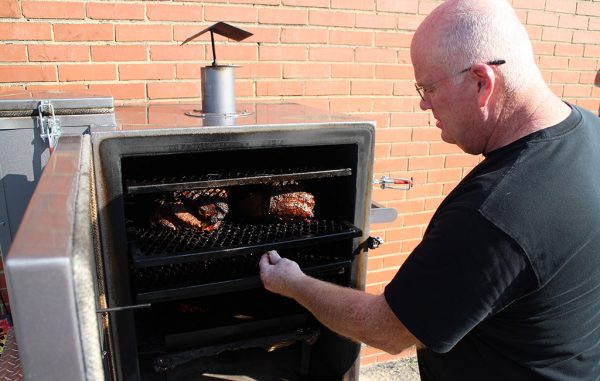 Roby Williams tends to pork butts that have smoked for eight hours at Smohk in Scott’s Addition. (J. Elias O’Neal)

The battle of the pit masters continues to heat up in a popular Richmond neighborhood.

The smokehouse is tucked behind a makeshift parking lot near the Wax Moon record store, and 300 feet away from Ardent Craft Ales and ZZQ – a barbecue venture under construction at 3201 W. Moore St.

“We’re a little hard to find,” Smohk co-owner Roby Williams said. “But we’re here and really excited to be a part of this neighborhood’s dining scene.”

A Virginia Tech alum, Williams had a love for barbecue while building his career as a designer of industrial prototypes. The recession and industry changes, such as 3-D printing and imaging, led him to decide it was time to take a leap.

“Things were changing … and I figured, maybe I should, too,” he said. 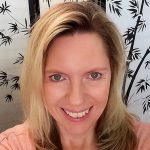 That’s when Williams rekindled his friendship with Sexton, who suggested they open their own restaurant.

By February, they took over Just Encase’s lease to transform the 2,000-square-foot space into Smohk.

There are no seats in the establishment, making Smohk a delivery and take-out joint from 11:30 a.m. to 6 p.m. on Tuesday through Sunday. The restaurant also offers a catering menu, where businesses can order food for pickup.

Smohk will try to make a name for itself in Scott’s Addition’s rapidly growing restaurant scene. That includes competition in the barbecue realm from ZZQ and nearby Lunch/Supper.

Several other new restaurants have opened or are in the works in the neighborhood. Most recently, Longoven announced plans to open its first permanent brick-and-mortar location at 2939 W. Clay St.

Brenner Pass, run by the owners of Church Hill’s Metzger Bar and Butchery, opened in June in the redeveloped Symbol Mattress factory.

HofGarden, a German-style restaurant and beer garden, is now open in the Hofheimer Building at 2818 W. Broad St.

The area’s craft beer scene and growing residential stock made it appealing to open Smohk, Williams said, adding that restaurant variety is a needed amenity.

“Food is the great equalizer,” he said. “It has no boundary and we all enjoy it. When people come to Smohk, I want them to tilt their head back and let their eyes roll in the back of their heads … that’s when I know this was all worth it.” 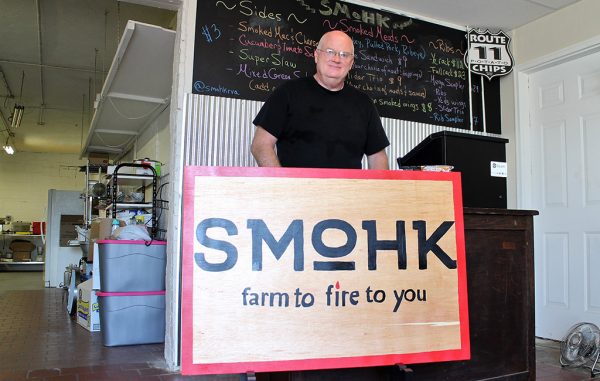