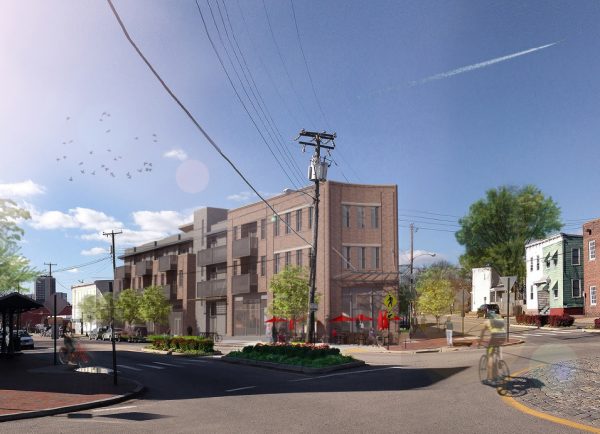 A rendering of the project as approved by the city.

After two years of work and four rounds with the city’s architectural review commission, developers behind a planned four-story mixed-use building along Jefferson Avenue in Union Hill are nearing the finish line to start the project.

The Richmond Planning Commission voted unanimously Tuesday in support of a required special-use permit for a new 45,000-square-foot building that would fill the bulk of a triangular lot at 2411 M St. and 2416 Jefferson Ave., adjacent to the traffic circle with North 25th Street.

The development would exceed existing zoning height restrictions and requires approval by City Council, which is scheduled to consider it at a meeting next Monday.

Developers Matt Jarreau and Daniil Kleyman are proposing the $8 million project, which would include four commercial spaces and six internal parking spaces on the ground floor, 27 apartments on the second and third floors, and a rooftop terrace and 3,000-square-foot community room that would be set back from the sides of the building to reduce visibility from the street.

The project also would include 15 on-street parking spaces, improvements to the streetscape along Jefferson Avenue and space to accommodate 16 bicycles.

The amount of vehicle parking and the building height were points of contention for some residents who spoke in a public hearing, contending neither keeps with the zoning requirements and historic character of Union Hill or the adjoining Church Hill and Church Hill North neighborhoods.

While acknowledging the project would push those limits, commission members maintained it would still be in keeping with the area, on a triangle lot that is challenging to develop.

“This really is a project that a special-use permit was made for,” Chairman Rodney Poole said ahead of the vote. 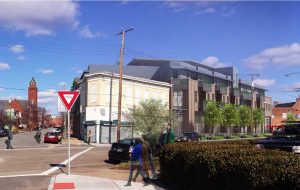 Rendering of the planned building on a triangular lot at M Street and Jefferson Avenue.

About as many speakers in the hearing voiced support for the project. Among them was Howard Kellman, a developer with The Edison Co. who owns the building that houses the nearby Roosevelt restaurant. Four other area residents also voiced their support.

Featuring upper-floor balconies and a mix of façade materials, the building was designed by local architecture firm ADO Design. Jarreau and Kleyman also have been working with Mark Baker of local land-use planning firm Baker Development Resources. A builder has yet to be selected.

Presenting to the commission, Baker said the developers plan to seek affordable housing tax credits by designating eight of the 27 apartments as low-income housing. The 27 units would include one-, two- and three-bedroom floorplans. Rents for the units have not been set.

The four commercial ground-floor spaces would total 12,000 square feet. One of the spaces would house a restaurant, which Jarreau said could be a local taco concept. He said they are also in talks with a juice bar tenant, while he and Kleyman would make one of the spaces their office.

“It’s a very dynamic project,” Jarreau said last week. “I think it fits in very well with the fabric of the community.”

Jarreau and Kleyman purchased the one-third-acre property for $482,500 through their 2411 M ST LLC, according to city records. The new building would replace a one-story office building at 2416 Jefferson Ave.

An adjacent two-story historic structure at 2402 Jefferson Ave., on the corner of Jefferson and North 24th Street, would not be involved, though Baker noted that Jarreau and Kleyman have purchased that property and plan to renovate it into ground-floor commercial space and second-floor apartments.

Baker said existing zoning would allow that project to be developed “by right.” City property records show Jarreau and Kleyman purchased the parcel in April for $345,000 through the same LLC.

The M Street project is the second infill development by Jarreau involving a triangular lot. Just down the street, construction is underway on his 23rd Street Triangle project, a three-story, 6,600-square-foot structure that will house four apartments above a restaurant and outdoor patio space. Jarreau said the apartments are set to be completed in about 40 days.

Jarreau, a real estate agent with Hometown Realty who resides in Church Hill North, also is involved in the development of four new homes and an apartment building rehab in the Sugar Bottom area, which recently had its first new homes in decades hit the market.

[…] development, which also includes 27 apartments on the second and third floors, received the endorsement of the Richmond Planning Commission earlier this month. Final approval would come from City […]