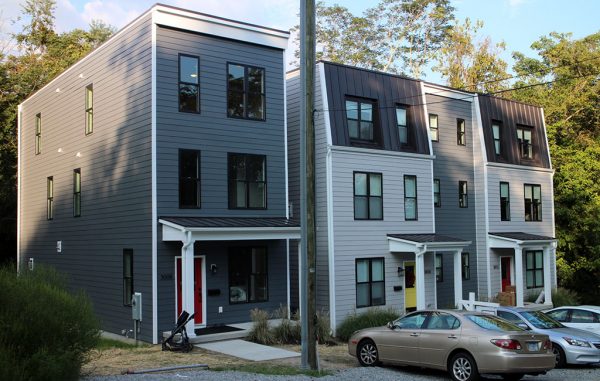 A pair of local developers’ bet on an overlooked part of Church Hill is beginning to pay off.

The first new homes to be built in decades in the neighborhood’s Sugar Bottom area have been sold and are now occupied, with more on the way.

The three modern-style row houses at the foot of East Franklin Street, just downhill from North 29th Street in a valley between Libby Hill Park and Chimborazo Park, are the first of several residential projects planned for Sugar Bottom, an area known historically as one of Richmond’s Civil War-era red light districts.

The first three homes – two attached townhomes and one standalone dwelling – are the product of Upward Builders, led by local developer Zach Kennedy. They were designed by 510_Architects, which also teamed up with Kennedy on a modern row house on M Street.

The two attached homes were built late last year, with one selling in December for $400,000 and the other in June for $408,000. Both total 2,400 square feet and include three bedrooms and 3½ bathrooms.

The detached third dwelling, likewise three stories tall with a rear balcony and glass railings, was more recently completed and listed earlier this month by Patrick Sullivan of One South Realty Group. The three-bedroom, 3½-bath home totals just below 2,300 square feet and is priced at $419,500. 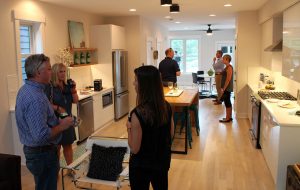 The third home was presented in a recent open house. (Jonathan Spiers)

Sullivan, who is marketing the homes through his re|RVA team with One South, said Kennedy’s next group of Sugar Bottom homes is currently under review by the city’s architectural review commission.

He said Kennedy is aiming to complete three more homes by next summer: a detached unit downhill at the end of Franklin Street, and two attached homes around the corner on North 31st Street. In total, the six homes represent a $2.5 million investment from Kennedy.

Across the street, RVA Sugar is also planning an upgrade of an existing apartment building and construction of two duplexes. Jarreau, an agent with Hometown Realty who has been active with several developments in the area, said those projects are set to go before City Council for potential approval in October.

The apartment renovations would convert the eight existing two-bedroom, one-bath units into one-bedroom upscale apartments, each totaling 625 square feet. The two duplexes would consist of four 900-square-foot units, each with two bedrooms and two baths. Monthly rents would range between $900 and $1,000 for the apartments and between $1,250 and $1,350 for the duplex units.

RVA Sugar’s four single-family homes, each totaling three bedrooms, 2½ baths and 2,200 square feet, are planned to be listed starting at $425,000 each.

The RVA Sugar homes initially were anticipated to come online this spring, but Jarreau said plan reviews and approvals from the city took months longer than expected. He and Sullivan both referred to delays in the city’s development review process, echoing sentiments from other developers that have increased recently. 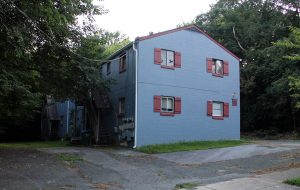 An existing apartment building across the street will be upgraded. (Jonathan Spiers)

Jarreau and Sullivan’s teams are banking on Sugar Bottom’s proximity to Libby Hill Park, the Virginia Capital Trail in nearby Fulton and Stone Brewing’s brewery and forthcoming bistro and gardens. Sullivan said interest in the new homes has been strong, with the first two buyers relocating from the city’s Libbie-Grove area and from Short Pump.

“Reception’s been awesome,” Sullivan said at a recent open house. “Not only have they sold well, but the response has been great. People love the idea.”

The new construction adds to other signs of investment in the area.

Last July, The Wilton Companies acquired the Armitage Building at 3200 Williamsburg Ave., around the corner from Sugar Bottom at the end of North 31st Street. Farther west in Shockoe Bottom, Sensei Development and The Monument Cos. are converting the former Garbers of Richmond building into apartments and is under contract to purchase the rest of that city block.

It’s great to see those old slummy buildings redone and habitable again. We await the renovation of the large storage building next door, looming over Williamsburg Blvd, which Wilton owns.