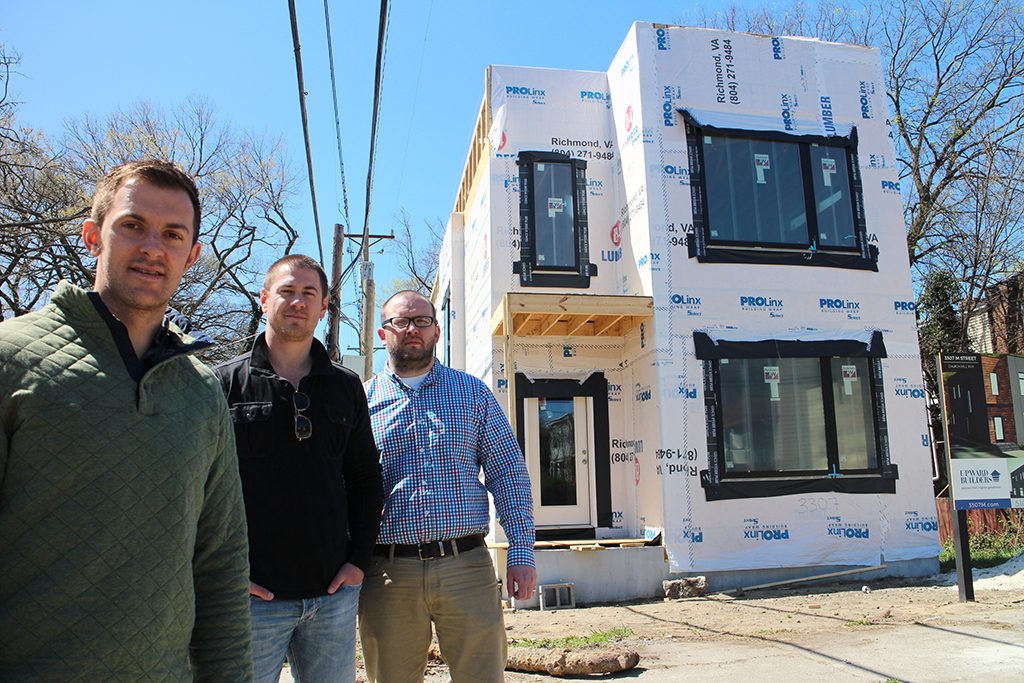 Patrick Sullivan, Zach Kennedy and John White, from left, in front of their M Street project. Photos by Jonathan Spiers.

Continuing their strategy of filling alleys with modern architecture, Patrick Sullivan and John White have turned their attention to an alley in Richmond’s oldest neighborhood.

Two-thirds of the team behind six modern townhomes planned between two alleys near the Fan, the development duo is working with Zach Kennedy of Upward Builders on a similar project: a modern-design home between two lines of rowhouses in Church Hill.

Under construction at 3307 M St., along an alley between North 33rd Street and Chimborazo Boulevard, the two-story house features a modern façade and cube-shape design that are centuries removed from the architecture of older homes that flank both of its sides.

And that’s the point, said Sullivan, an agent with One South Realty. 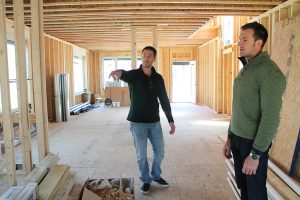 “Seventy-five years from now, that house will be something where you can say: ‘That’s early-2000s architecture. That was when architecture started to change,’” he said.

“The goal was to timestamp 2015-16 with a certain look,” added Kennedy. “We wanted the size, mass and scale to be the same, but a more modern concept.”

Working again with White of 510_Architects, who is designing the six townhomes off South Robinson Street near the Fan – a project dubbed A2 – Sullivan is marketing the M Street house for Kennedy, who purchased the one-tenth-acre site last September for $40,000 through Cheneys Creek LLC.

Sullivan said the modern design was allowable because, while the site is located within the Oakwood-Chimborazo national historic district, it is a few blocks beyond the nearest city historic districts, and therefore beyond the jurisdiction of the city’s architectural review commission.

Sullivan said demand is growing for newer homes and newer architecture in the city’s older, more walkable neighborhoods, particularly from homebuyers moving to Richmond from larger cities. A comparable project, Citizen 6 – by developer Bill Chapman – brought a dose of modern architecture to a block of Floyd Street in the Fan last year. All six of those homes presold before construction started in 2014. 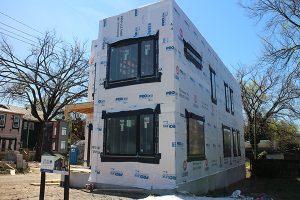 The home will be finished later this spring.

The M Street house totals 2,250 square feet and features two-bedrooms, 2½-bathrooms, as well as more unique touches like a self-supporting staircase and a rubber roof.

The house is slated for completion by late May or early June, and Sullivan plans to list it at $399,950. While that price may be higher than most in Church Hill, it’s not unheard of in the neighborhood, which saw two new homes on North 31st Street sell for $390,000 apiece last year. Other homes recently built on North 30th and 31st streets were priced at above $400,000.

Kennedy said response from passers-by in the neighborhood has been positive, though he acknowledged some resistance when the design was first presented.

“The main thing that people are concerned about is doing modern right,” he said. “A lot of people have tried and not been successful.”

White’s other design projects have included Huntt’s Row, developer John Nolde’s 10 new homes under construction at Robinson and Kensington streets in the Fan. And Sullivan is also involved in 7west, a project by developer Jeremy Connell that will bring 12 new townhomes in Manchester.

Give Patrick Sullivan hid kudos! His developments may not rival SWA (see above) but his collaborations with various builders are producing some interesting new for-sale product in a city that heretofore has resisted change. It’s all good and necessary to back fill empty lots and propel Richmond forward!

Thanks Bruce! Check out 3307m.com for more info on the projectand to follow along with the progress!

I take exception with this sentence –

“Sullivan said the modern design was allowable because, while the site is located within the Oakwood-Chimborazo national historic district, it is a few blocks beyond the nearest city historic districts, and therefore beyond the jurisdiction of the city’s architectural review commission.”

As a member of the Commission of Architectural Review, I was to clarify that it is possible to build modern infill development (new construction) within a historic district, as long as it fits into the scale and character of the neighborhood. Fake historicism is not required for infill buildings in historic neighborhoods.

Developers went hog-wild in Richmond 50 years ago buying up slivers of land in places like Church Hill and the Fan, building little shoe box houses out of concrete block. They pooh-poohed the Greek Revival and Arts and Crafts styles calling them old and blighted. The only difference is that the shoe box houses were not overpriced and narcissistic.