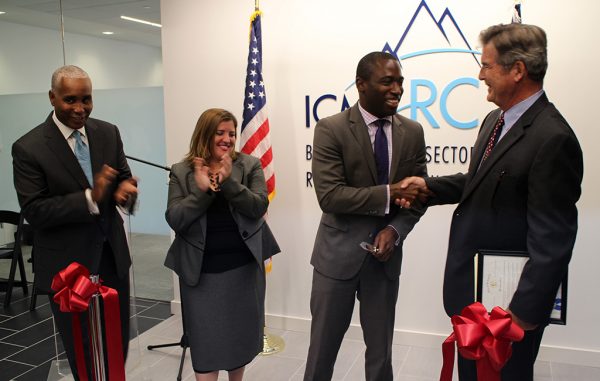 The latest out-of-town company to expand to Richmond cut the ribbon this week on its new downtown digs.

ICMA-RC celebrated the opening of its second office in Riverfront Plaza on Wednesday with a ribbon-cutting event with Mayor Levar Stoney.

The Washington, D.C.-based retirement plan manager moved into the plaza’s East Tower in July, occupying the sixth and half of the fifth floors. Once renovations are complete, it is set to also fill the tower’s seventh floor, bringing its total square footage to 55,000.

The company has relocated 103 employees and is set to have 250 employees in Richmond by the end of 2019. The move represents a $10 million investment for the company, which is celebrating its 45th year in business.

Formed in 1972 by the International City/County Management Association, the company’s first client was a city manager of Charlottesville, ICMA-RC president and CEO Bob Schultze said.

“So we’ve had a long history with Virginia,” Schultze said, adding that the company now provides more than 9,000 plans in 49 states and manages about $52 billion in retirement assets nationwide. In Virginia, it provides services to 130 counties and municipalities, including the City of Richmond, which Schultze said it has served for nearly 30 years. 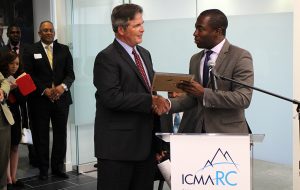 The company selected Richmond over 20 other cities considered for the move, which Schultze said was prompted by the company’s growth. He said Richmond won out for its affordability and proximity to D.C., where the company is maintaining its headquarters.

“We’ve grown quite a bit, and we outgrew our space in Washington and needed to do something,” he said. “It’s really expensive to rent additional space, so we decided that we needed to shrink our footprint in D.C. … Space here in Richmond costs about one-third what it costs to rent equivalent space in D.C.”

Schultze lauded the assistance of the mayor’s office and the staff at Greater Richmond Partnership in helping with the move and relocation process.

Mayor Stoney noted ICMA-RC adds to a wave of recent expansions to downtown Richmond by companies including AvePoint, Owens & Minor and Thompson Reuters, each of which have taken space at Riverfront Plaza. Another recent arrival, fellow D.C.-based firm CoStar, has made the top floors of the WestRock building its research division headquarters.

“It gives me great pride to bring such a strong and mission-focused organization to the Richmond area,” Stoney said. “We are happy that ICMA has made this great city their second home, especially since ICMA has been providing services to Richmond for so many years.”

Laughing, Stoney added: “I think I might also be a client.”