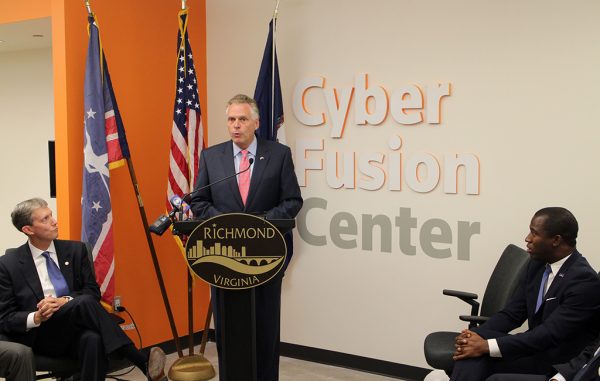 Another big-name tenant is setting up shop along the riverfront.

Mayor Levar Stoney and Gov. Terry McAuliffe announced Wednesday that Thomson Reuters has set up an office on the 13th floor of the West Tower in Riverfront Plaza at 901 E. Byrd St.

The 9,300-square-foot space is the Toronto-based media and information firm’s first outpost in Richmond.

The company dubbed the new office its Cyber Fusion Center. It is expected to employ more than 60 people. It has about 20 employees on the ground currently, with plans to have 40 by yearend. Thomson Reuters is currently hiring for 11 positions at the new Richmond office, including an IT project manager, securities platform engineer and information security engineer.

Maryland, South Carolina and Florida also were in contention for the company’s business.

The Virginia Economic Development Partnership worked with the city and Greater Richmond Partnership to secure the project. Some state and city money helped sweeten the deal in Richmond, as the company received a $50,000 grant from the city’s Economic and Community Development Authority, by way of the Commonwealth’s Opportunity Fund. 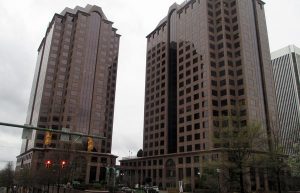 “I have been maniacal on this topic for the last four years because cyber is the future and you putting this here in Virginia is a big deal for us,” McAuliffe said at a press conference Wednesday.

Stoney and McAuliffe have been making a habit of welcoming new tenants to the Riverfront Plaza in 2017.

Mechanicsville-based healthcare logistics company Owens & Minor moved into the East Tower in February as a part of a $15 million expansion into the city limits. Software company AvePoint unveiled its Silicon Valley-inspired office at the tower in April. Insurance brokerage The Hilb Group is moving its headquarters from Stony Point office park to the West Tower in June.

There is now 96,000 square feet available for lease between the two 22-story Riverfront Plaza towers, Wilkins said. They have a combined 950,000 square feet.

The office complex is owned by Hertz Investment Group, a California-based firm that bought the twin towers in 2015 for $147 million.

[…] of recent expansions to downtown Richmond by companies including AvePoint, Owens & Minor and Thompson Reuters, each of which have taken space at Riverfront Plaza. Another recent arrival, fellow D.C.-based firm […]

[…] They include Beth Musick, who worked 20-plus years in sales and account management with data giant Thomson Reuters; Diana Burkett, a former communications director for the University of Richmond’s alumni and […]