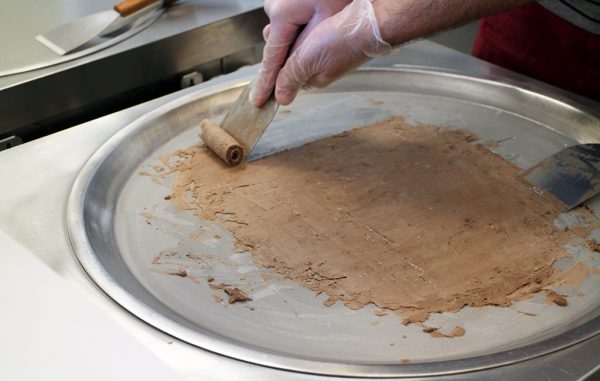 Liquid ice cream is poured onto a cold surface and rolled while it freezes. (Mike Platania)

Shops serving rolled ice cream, which originated as Southeast Asian street food and is sometimes referred to as Thai ice cream, have been popping up around the country.

Cold Platform’s ice cream is made by pouring a base liquid – chocolate or vanilla – onto a surface chilled to below 0 degrees. Toppings are chopped up and mixed in while the ice cream hardens, after which it’s spread out and scraped into rolls.

“It’s big in California and New York, but here it’s something people don’t know a whole lot about,” said manager Jonathan Alvarado, a Brooklyn native who grew up working in restaurants, including his family’s pizzeria. 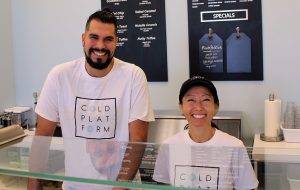 Cold Platform offers house flavors such as Rocky Road, Nutella Crunch and Strawberry Shortcake, and customers can customize their own. Orders come in one size and sell for $7 after tax.

“(The size) is somewhere between a medium and a large ice cream at other places,” Alvarado said, adding that it takes about three minutes to make an order.

Along with Alvarado, Cold Platform has about 13 employees.

Alvarado said the company is exploring more locations in the Richmond area, including within city limits. He said Cold Platform plans to add bubble tea to its offerings – another Thai-inspired treat.

nice to see something truly new to Richmond!