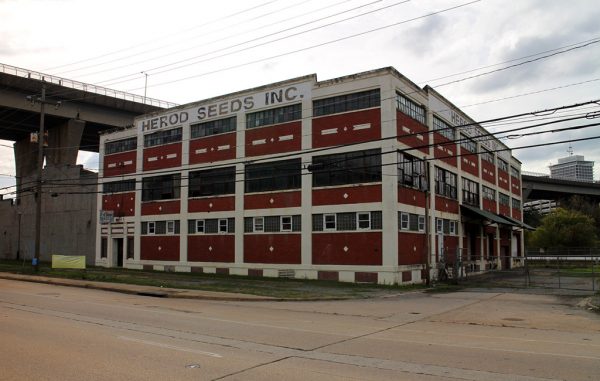 The Herod Seeds building is one of three warehouses on the property below the MLK Bridge. (Jonathan Spiers)

A plan to redevelop a century-old warehouse could add housing options to Richmond’s Shockoe Valley.

The Richmond Planning Commission last week endorsed a request to rezone and redevelop the Herod Seeds building and adjacent property at 904, 908 and 1020 Oliver Hill Way, below the Martin Luther King Jr. Memorial Bridge that connects downtown with the city’s East End.

The request was made by property owner Norman Herod and Crescent Preservation & Development Co., which is led by developer Zac Frederick. Documents submitted to the city indicate a residential development is planned for the three parcels totaling 2.4 acres.

Three warehouses totaling 46,375 square feet would be redeveloped for residential use, while new residential buildings would be constructed on the property’s unimproved areas, according to documents submitted by consulting firm Markham Planning.

The documents describe the existing buildings as historic. The Herod Seeds warehouse was built in 1909, according to city property records.

The parcels were last purchased between 1987 and 1990, in transactions totaling just under $670,000. Recent city assessments valued the properties collectively at $1.05 million.

The documents do not specify a total number of residential units or other details about the project. Reached Monday, Frederick declined to discuss the project before it goes before City Council on Nov. 13.

The rezoning would change the property from industrial uses to central business district, which would allow for residential and mixed-use development. The commission endorsed the request as part of its consent agenda, typically reserved for planning items that do not require discussion.

If approved, the project would be the latest move in the area for Frederick, whose development group in April purchased the former Duke’s auto repair shop at 2018 E. Broad St in Church Hill.

The previous month, the group purchased a former assisted-living facility near Carytown that Frederick plans to convert to apartments. And last year, it made some of its first acquisitions, purchasing a bank building and two adjacent parcels in the 2600 block of West Broad Street, along with the Eco Flats apartments at 613 Brook Road in Jackson Ward with local firm The Oxford Group.

A very interesting yet challenging site for Zac Frederick. The general location is exceptional as most of the “green” sites have been claimed. I predict he’ll do well here. There are several more moves afoot in Shockoe as the area continues to evolve into a more professional place to live, which will shuck its Wild West image.