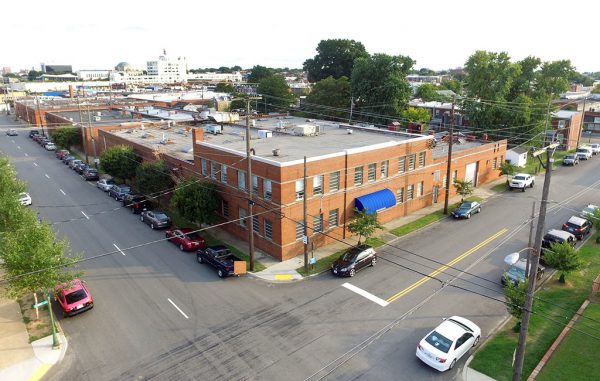 A commercial mixed-use development is proposed for the Phipps & Bird facility at 1519 Summit Ave. in Scott’s Addition. (Courtesy Justin Paley)

Jason Guillot and Justin Paley are looking to redevelop the Phipps & Bird facility at 1519 Summit Ave. and 3015 Moore St. into a mixed-use project dubbed The Spur.

They’re under contract to purchase the 35,000-square-foot building, which covers half a city block, for an undisclosed sum. It’s currently occupied and owned by Phipps & Bird, which moved into the building in the mid-1990s and produces scientific kits, tools and accessories.

While they wait to close on the deal, Guillot and Paley are beginning to market the project to gauge interest from potential tenants.

“We’re looking for a mix of tenants,” Guillot said. “Everything from restaurants to retail, to office would work for this project.”

The deal is the first for Paley and Guillot, each of whom have worked other projects on their own or with other partners.

Guillot, a principal with Thalhimer Realty Partners, is also co-developer with Stefan Cametas on the revamp of the former Westhampton Theater site.

In their Scott’s Addition project, they would take on a building first constructed as two buildings in 1948 to serve as a manufacturing and distribution outpost for Reynolds Metals, Guillot said.

“There was a rail spur that came between the two buildings,” he said. “This is why we’re calling the project The Spur.”

When the rail spur was removed, Reynolds paved over the area in the 1970s and constructed an atrium-style structure fusing the two parcels together. 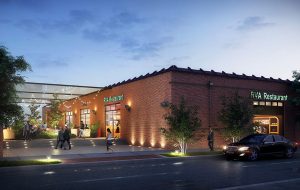 Guillot said plans call for the 1970s atrium piece to be demolished – opening the space to be transformed into a common area with greenery and seating that could double as restaurant patio seating.

“To bring the type of users we think would be attracted to the property, we feel adding green space to the project is ideal,” Guillot said. “We plan to have Wi-Fi access there, which will allow companies and workers to use the space as a gathering or meeting area.”

Plans call for spaces in The Spur from 1,100 square feet to 14,500 square feet for individual tenants, although Guillot said that could increase up to around 20,000 square feet. The site also will include a mix of onsite, garage and street parking.

The pair hopes to close on the property by first quarter 2018. The building most recently was assessed for about $1.13 million, according to city tax records.

A general contractor has not been selected for the pending project. Fultz & Singh Architects has been tapped for design work.

Guillot did not disclose a budget for the redevelopment. He said they plan to seek historic tax credits as part of the project.

The former Conner Brothers Body Shop at 1008 N. Sheppard St. was purchased this summer by Mark Morton and Brad Cummings, who will redevelop the 4,100-square-foot property into mixed-use space for a restaurant and office tenant, and nearly double its size by adding a second story.

And tenants recently moved into the first phase of the Summit Suites project, a planned conversion of three aging office properties at 3122, 3113 and 3015 W. Marshall St. into modern workspaces.

GLad there will be green ,space, one of S/A’s greatest needs at this point.

Any word on where the current occupant, equipment manufacturer Phipps and Bird, will land? Hope they don’t leave the area altogether.

Will Willis
Reply to  Bradley Purcell

Green space and parking are a premium in S/A. I know the Symbol Apartments behind Dominion Payroll will have a pool and large green space in the center of the buildings. I was hoping the lot in-front of Mosley Architecture was going to be turned into a central park green space but instead we got some much needed parking spaces.

Phipps & Bird was founded in Richmond in 1925 by Lloyd (L.C.) Bird and has been here ever since. We’re searching for a new location after having called Scott’s Addition ‘home’ for the past 20+ years. Haven’t found one yet, but it will be in the greater Richmond area, for certain!

This is just the early stages of their careers for Guillot and Paley and we’ll see a lot of them in the future doing some spectacular projects. It’s interesting to see my ex-cousin in law, Mark Morton, entering the business and I wish him the best in his first venture.