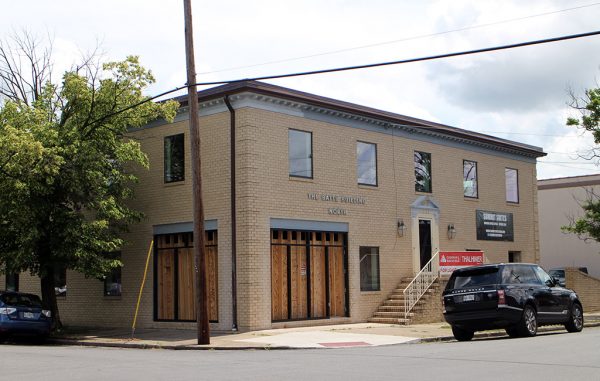 The appetite for Scott’s Addition office space has filled another old building in the popular neighborhood.

The Summit Suites project, a planned conversion of three aging office properties at 3122, 3113 and 3015 W. Marshall St. into modern workspaces, has topped off the first of its three buildings.

They join the Richmond office of law firm Graybill, Lansche & Vinzani, which signed on in the building this spring.

Summit Suites is owned by a group of local developers led by Yogi Singh. They purchased the properties last year, and work on the first building began in September.

“We were surprised at the level of interest and we think it’s 100 percent due to interest in the neighborhood,” Singh said. “Scott’s Addition is on fire.”

Singh said the building has been gutted and permits have been submitted to the city for all tenant improvements. The hope is to have them move in by fall. Exterior work is also ongoing.

Fultz & Singh Architects is designing the building. Union Bank is financing the venture. Archingen’s PermitZip did the mechanical, electrical and plumbing permit drawings. 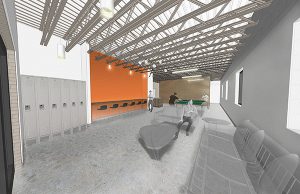 Singh said the group’s plan to transform the two-story, boxy structure has proven attractive to tenants.

Luring Shockoe out of its namesake neighborhood in Shockoe Bottom gave Summit Suites its first anchor tenant. The app maker, which has grown steadily since CEO Edwin Huertas launched it in 2008, is taking the building’s entire second floor – around 8,100 square feet.

Huertas said the company’s headcount has grown in line with its client base, which includes Capital One, A.C. Moore, Winn-Dixie and homebuilder NVR.

He said Shockoe’s 45 employees need more space beyond its current home at 1705 E. Main St., and Scott’s Addition is the neighborhood du jour.

“It’s trendy, right. So we wanted to be where the action is,” he said.

While Shockoe’s name matches that of its current home neighborhood, Huertas said, half-jokingly, he doesn’t see a need to change the company’s moniker to match its new surroundings.

“Because the majority of our clients are outside of Richmond, they don’t really make that connection,” he said.

Yogg also is moving from the Bottom, and 501 Auctions will come over from Jackson Ward.

Prospective ideas for Summit Suites’ remaining two buildings and two parking lots, Singh has said, include connecting the two existing properties or creating something larger via new construction. That may include office space or mixed-use.

Singh said the popularity of Scott’s Addition has brought interested parties to his doorstep inquiring about the remaining area – roughly 25,000 square feet on the parking lots and 21,000 square feet between the two buildings.

Cushman & Wakefield | Thalhimer brokers Jason Guillot and Birck Turnbull are handling leasing at Summit Suites and will manage the property.

Guillot said there is substantially more demand than supply for office space in Scott’s Addition and on Boulevard.

“There’s an interesting dynamic at play when an owner can replace a warehouse tenant paying $3 per square foot for an office or retail tenant paying $25 per square foot,” Guillot said. “At Summit Suites, the ownership saw an opportunity to work with companies looking for smaller spaces that are hard to come by in large redeveloped warehouse properties.”

Summit Suites’ leasing success mirrors, on a smaller scale, at least two other new office projects in the neighborhood.

The three-story, 60,000-square-foot office building nearing completion at the former Symbol Mattress factory at 3200 Rockbridge St. has signed leases for all but 1,400 square feet.

And the redeveloped HandCraft building at 1501 Roseneath Road has leased about three-quarters of its 87,000 square feet.

Congrats to Yogi for his foresight but is he really getting $25 psf as asserted by the quote from his broker? If so, that’s the real story! Stop the presses!