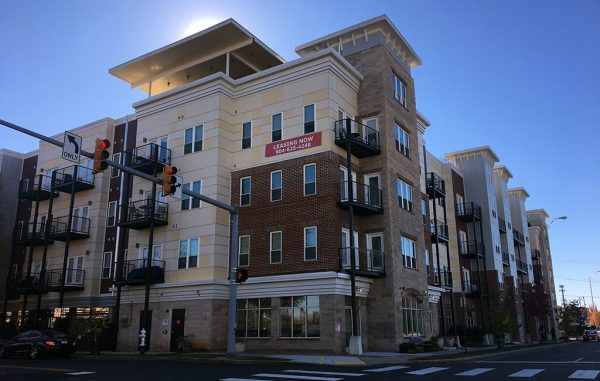 SunTrust is opening a branch at 1200 Semmes Ave. in Manchester. (Michael Schwartz)

A short-lived Manchester café and coffee shop soon will be replaced by a rare sight in the neighborhood: a bank branch.

Atlanta-based banking giant SunTrust plans to open a location in vacant commercial space at the corner of 12th Street and Semmes Avenue, on the ground floor of the 1200 Semmes development.

The 1,450-square-foot space previously was occupied by locally based café chain Urban Farmhouse, which vacated last year after about a year in business.

It sits catty-corner to the campus of SunTrust’s mortgage operations, which are headquartered in Manchester.

A spokesman confirmed the new branch is in the works and it would look to ready the space by the second quarter. The company declined to comment further, including whether it would replace its existing Manchester branch at 1518 Hull St.

That Hull Street location holds $12.5 million in deposits as of June 30 – the smallest of SunTrust’s 40 branches in the Richmond area, according to FDIC figures.

It’s one of the only bank branches in the neighborhood and is housed in a 90-year-old building along a stretch of Old Town Manchester that’s garnering renewed interest.

The three-story, 13,000-square-foot building is owned by SunTrust, city property records show. It sits on a 0.2-acre lot at the corner of Hull and East 16th streets and most recently was assessed at $368,000.

SunTrust will be one of two corner commercial tenants in 1200 Semmes, joining a Subway sandwich shop at the opposite end of the building. The rest of the development, built by Mark Purcell, Robin Miller and Dan Gecker, is filled by 129 apartments.

The Community Reinvestment Act of the 90’s forced banks to make choices of either opening branches on the low income areas, providing loans to those who couldn’t possibly qualify ( we saw where that led us) or competing to purchase low income housing tax credits (LIHTC) from developers. They usually chose any course other than open branch banks in distressed areas and that included Manchester two decades ago. That’s no longer the case as Manchester has become a significant new community and much more is to come. Now that various mechanism should for funding LIHTC on the chopping block, I… Read more »

SunTrust is doing what it, and others banks have done, abandoning historic branches (it goes this from Crestar that got it from United Virginia) for nearby cheaper rental space. They are starting to see maintenance issues in the large older branches that they just don’t want to address. SunTrust has been reviewing its older branches in all areas across of VA and moving to newer and smaller rental spaces. They recently closed the historic Bank of Gloucester building (early November) on its Main Street for a new location in the new retail Fox Center just down road. Lynchburg lost its… Read more »

[…] across the street, SunTrust will have two corners of the 12th and Semmes intersection covered. Richmond BizSense reported on the SunTrust news today where a SunTrust spokesperson declined to comment on whether it would close its existing […]

SunTrust is in the banking business, not the real estate business. I don’t feel its a slight to older, more historic buildings as much as its the increased efficiency of occupying a rental space. In fact, now the 90 year old building on Hull St can be sold to a local developer who can renovate the space to match the current needs of the neighborhood. Also, I’m happy to see more storefronts along Semmes Ave. Urban Farmhouse took a chance on the space, but failed to compete with the corporate-run cafeterias of SunTrust & UPS. Hopefully the new SunTrust branch… Read more »