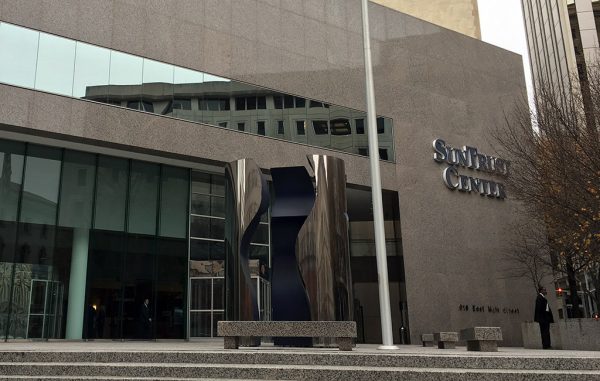 YMCA is moving its James Center location to the SunTrust Center. (Mike Platania)

A city gym is hopping from one downtown office complex to another.

YMCA of Greater Richmond is moving its location in the James Center to the SunTrust Center at 919 E. Main St.

The new location, named The 10th St. YMCA, is set to open in April. The James Center Y will continue to operate through the end of its lease, which expires at the end of March.

COO Megan O’Neill said the nonprofit is downsizing the location with the move. The James Center Y occupied about 26,000 square feet, and the SunTrust location will be less than half of that, at 12,000.

“The James Center location had squash and racquetball courts that we’re not moving. Instead we’re renovating those courts in the downtown location,” O’Neill said, referring to the branch at 2 W. Franklin St. She said the fitness center layout in the SunTrust location will mirror the James Center’s.

The SunTrust Y will be located on the building’s ground floor with an entrance on 10th Street. Work is underway to outfit the space, which O’Neill said a tenant previously used as a library.

The James Center, a three-building, 1 million-square-foot complex on East Cary Street, sold in January to Bill Goodwin’s Riverstone Group for $108 million. After the sale, Riverstone announced renovations that may cost tens of millions of dollars.

O’Neill said the new landlord and pending renovations didn’t play into the organization’s decision to move.

“We started looking around June of 2016. We knew our lease was going to be up at the James Center and wanted to get ahead of it,” she said. “We knew the space we were occupying was just too big for our membership base.”

YMCA of Greater Richmond has 17 locations in the region. The nonprofit’s most recently filed report with nonprofit tracker GuideStar shows revenue in 2015 reached $41.4 million.

While the James Center is losing a tenant in the Y, in July it welcomed its first new retail tenant since its sale at the start of the year. In early 2018, The Pit and The Peel juice bar will open its third area location in the James Center Atrium.