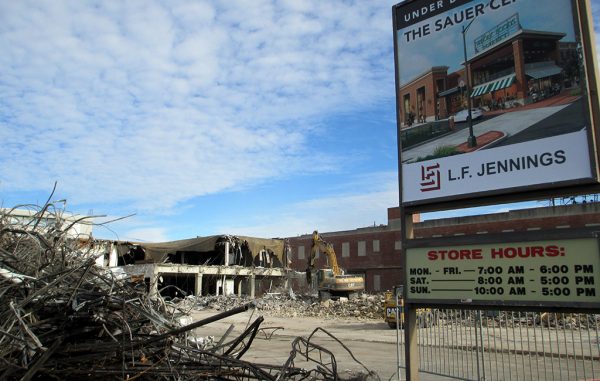 Demolition got underway this week at the vacant Pleasants Hardware store at 2024 W. Broad St., where a Whole Foods store is planned as part of Sauer Center, a years-in-the-making 200,000-square-foot development from the real estate arm of neighboring spice maker C.F. Sauer Co.

Crews with Fulton-based S.B. Cox were busy Thursday taking down the building that had served as Pleasants’ home base since 1975. Sauer purchased the local chain in 1989 and sold it last year to Virginia Beach-based retailer Taylor’s Do It Center, just before the Broad Street location closed.

L.F. Jennings, based in Falls Church with an office in Henrico, is the contractor on the Whole Foods building, which is designed by Henrico-based Freeman Morgan Architects. L.F. Jennings’ local work has included the Wegmans-anchored West Broad Marketplace center in Short Pump. 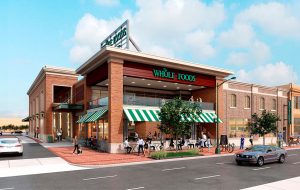 The Whole Foods building is scheduled for completion in fall 2018, according to L.F. Jennings’ website.

The rest of Sauer Center will add retail and office space in multiple buildings, including a pair of old Sauer-owned warehouses along Hermitage Road behind the company’s headquarters and spice factory. Sauer Properties also owns the former Virginia Department of Taxation building to the west of the Whole Foods site.

Sauer Properties has said it plans to own and lease all the buildings within the development. Lee’s Famous Recipe Chicken, whose building at 2200 W. Broad St. Sauer Properties does not own, will continue to operate within the new retail and office center.

This is all good news for Broad Street’s continuing renovation. And how many new shopping centers get to have the best fried chicken shop in the region as part of the overall plan?!! Now, if we could just get Pulse operating. . .

I’ve always thought Sauers should do a Sauers Experience attraction (like the Coke Experience attraction in Atlanta) that would pair tours of the spice factory with interactive historical exhibits and samplings of spices and foods related to their product line. Maybe they could make room for that in this new development.

That would be awesome. Hope they are reading and consider your suggestion. Can’t wait for Whole Foods – this location will be ‘walkable’ for me – though I guess I’d have to minimize the size of my purchases.

great to see this happening finally. It’ll do great things for Broad Street

For those looking to get a piece the last of the Pleasants structure, it will be down probably today (12/18). It was amazing to see the store layout and realize how many additions made the final version as they tore it down..

Anyone know the status of this Whole Foods?