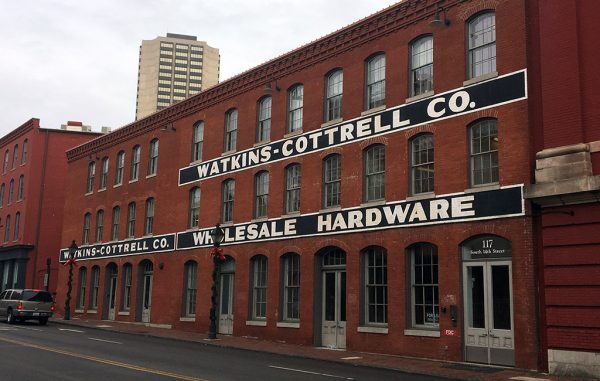 Triad and Signature keep an office on the third floor at 11 S. 14th St. (Michael Schwartz)

The patriarch of one of Richmond’s most notable families is moving the management of his clan’s estate into the hands of a Hampton Roads-based firm, a move the firm hopes will elevate its status locally.

Norfolk-based Signature Family Wealth Advisors has brought into its fold Triad LC, which oversees the assets of Richmonder Ivor Massey Jr. and his extended family, a fortune that was gathered from a namesake coal company and other businesses over the years.

The transition takes some of the load of managing the undisclosed sum off the shoulders of Massey, who said he’s been running his side of the family’s finances since his father died in 1994.

He said there were two reasons they made a move to an outside firm.

“One was succession planning. I just turned 70 and nobody in my generation is getting any younger,” Massey said, adding that there are 16 individuals on his side of the family tree spread from Richmond to Florida and up to Massachusetts and Chicago.

“The second reason is in a single-family office the opportunities for employee development are somewhat limited,” he said.

Triad employs a staff of four – a chief investment officer, two CPAs and administrator who work exclusively on the Massey estate. They’ll continue in that role as employees of Signature and Massey. Massey said he and the Triad foursome will gain access to Signature’s staff of more than 40.

“We get a broader range of investment expertise that we interact with on a day-to-day basis,” he said, adding that he did not take an ownership stake in Signature as part of the deal.

The Massey family estate adds to the more than $4 billion in client assets managed by Signature, which bills itself as handling investment management, estate planning, tax organization and other services for high-net-worth families with more than $10 million in investable assets.

The firm serves about 165 clients across 21 states and has offices in Charlottesville and Richmond, in addition to its home in downtown Norfolk, where it was founded by attorney Anne Shumadine and accountant Susan Colpitts.

As part of the new Massey relationship, Signature is taking over Triad’s office at 11 S. 14th St. as its new Richmond outpost.

“The burden of a family office is typically on one individual in the family to oversee all this stuff and make sure it’s running smoothly for the other family members,” Ayres said. “It’s giving up a little bit of control and autonomy, but we think the benefits outweigh the difficulties.”

Signature CEO Randy Webb said there is at least a nascent trend of so-called single-family offices like Triad bringing their assets to an outside firm.

“Families are looking to broader teams and figuring out ways to source more depth and more expertise,” Webb said. “That’s one of the reasons we wanted to highlight this.”

Signature admits the move to publicly announce the acquisition of a new client – let alone to identify the family – is unusual in its normal course of business.

“(The Masseys) are a well-respected family in Richmond and we hope it’s a signal to other people that Signature is there to stay,” Ayres said.

Added Webb: “To grow in Richmond is certainly part of our strategy.”

The present Massey estate owes much to Ivor Jr.’s grandfather, A.T. Massey, who started what became Massey Coal. Ivor Massey Sr. worked there briefly after World War I, before starting local fuel dealership Massey, Wood & West, leaving his brothers to run the coal company before it was eventually sold off.

Ivor Jr., who lives in the Fan, said he plans to continue working daily in the new Signature Richmond office, managing the estate alongside new colleagues.

“My dad lived to be 98 and on the last day of his life he spent the morning in the office, the afternoon playing golf and then took his wife out to eat,” Massey said. “That’s kind of the model of guys in our family.”

A piece of the estate of one of Massey’s relatives, his late cousin William Blair Massey, is up for grabs in Goochland County. His River Run Manor, the 16,000-square-foot home on 60 acres at 2421 River Road W., is listed for sale at $5.9 million with Joyner Fine Properties’ Richard Bower.