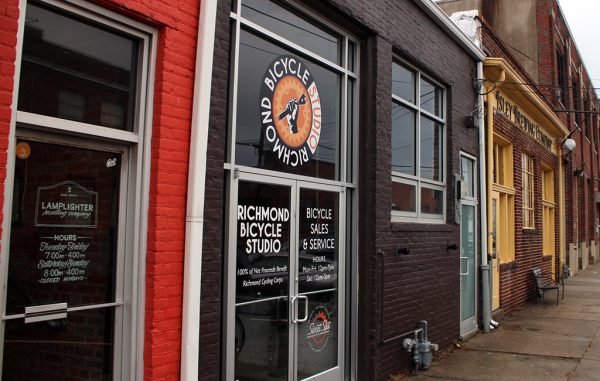 Richmond Bicycle Studio will close at 1717 Summit Ave. by the end of January. (Mike Platania)

A bike shop affiliated with a local nonprofit is preparing to close in Scott’s Addition.

Richmond Bicycle Studio will shut down at 1717 Summit Ave. by the end of the month.

The shop is tied to Richmond Cycling Corps, a nonprofit that supports youth in public housing through its mountain biking team. RCC will continue operating as the bike shop closes.

Craig Dodson, founder of RCC and Richmond Bicycle Studio, said the shop had been doing well since opening in 2011 but the organization chose to close it to focus more on helping youth in Richmond’s East End.

“The decision was made by the environment we’re working in out in the East End,” Dodson said. “It’s to the point where things are emphatically getting worse.

“The ability to run an operation-heavy business in Scott’s Addition of all places was not aligned with the full-court press we’ve got to be in out (there),” he said.

RCC previously was based out of the shop but moved its headquarters to 2123 Fairmount Ave. in 2016 to be closer to participants. The nonprofit’s former space behind Richmond Bicycle Studio has since been taken over by Lamplighter Coffee Roasters.

The bike shop’s closure will not affect The Kickstand, a bike repair and rental service operated by RCC youth along the Virginia Capital Trail. Dodson said The Kickstand will continue operating.

“(The Kickstand’s) provided more employment opportunities for our kids, and a closer commute near the East End,” he said. “RBS was to raise and save us funds. We were getting equipment at wholesale pricing and getting to do bike repairs in-house. That’ll continue because of The Kickstand.”

Also based out of Richmond Bicycle Studio is Sweet Spot Cycling, a spin studio and cycling coaching service that’s not affiliated with RCC.

Richmond Bicycle Studio will join 3Sports on the list of local bike shops to close in recent weeks. 3Sports closed its Short Pump location in West Broad Village on Dec. 31.

RBS has been great to me and my bike. However, I’m grateful for their willingness to serve the East End and the mission they have to bring biking to that community! Scott’s Addition’s loss, East End’s win.