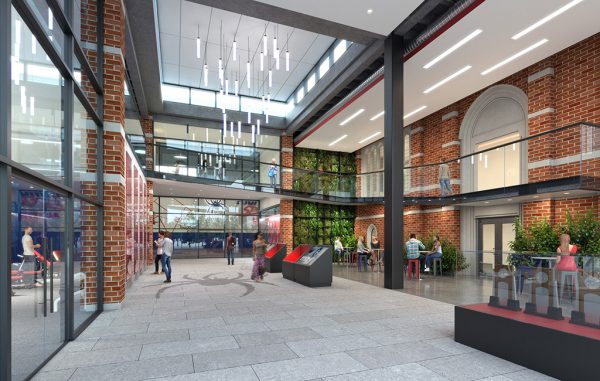 Rendering of the university’s planned basketball facility lobby. (UR)

The Spiders’ web around the Robins Center is set to get bigger with a multimillion-dollar assist from a pair of alumni.

The University of Richmond announced plans this week for a new $15 million practice facility for its men’s and women’s basketball teams, to be funded in part by a gift from alumni Paul and Anne-Marie Queally.

Dubbed the Queally Athletics Center, the facility will be built adjacent to the Robins Center, the Spiders’ arena where the teams currently practice. Construction is set to begin in spring 2019, with plans to open in fall 2020.

Barton Malow Co. is the builder on the project, with Charlottesville-based VMDO Architects signed on as the designer.

The center will comprise one full-size court and a half court, along with a sports medicine and nutrition facility, weight room, study areas and offices for coaches.

“The facility will house all of the day-to-day operations of our teams, coaches and staff,” said Chris Mooney, UR’s men’s basketball head coach, in a statement.

The Queallys kicked off a fundraising effort for the facility with a $7.5 million gift. Their support of their alma mater is evident on campus – UR’s business school building and welcome center also are named for them. Paul Queally serves on the university’s board of trustees.

The announcement comes three years after the Spiders’ cross-town and Atlantic 10 Conference rivals opened a new practice facility of their own.

Rendering of the facility, set to rise next to the Robins Center. (UR)