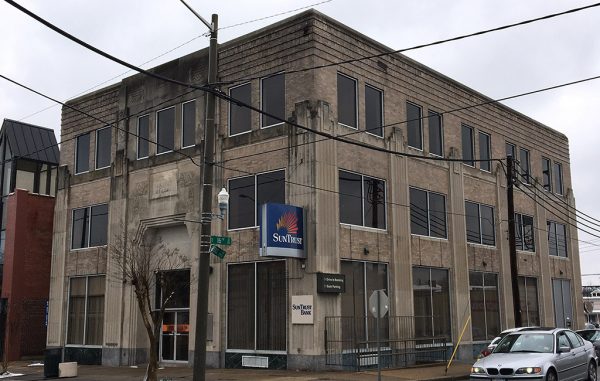 The SunTrust branch at 1518 Hull St. will be put up for sale. (Michael Schwartz)

A banking giant plans to vacate its longtime Manchester branch in favor of a newer location up the street, in a move that will put up for grabs a 90-year-old building along a stretch that’s garnering renewed interest.

SunTrust confirmed this week it will relocate its branch at 1518 Hull St. to 1200 Semmes Ave.

The new outpost is on the ground floor of the 1200 Semmes development at the corner of 12th Street and Semmes Avenue, catty-corner to the headquarters campus of SunTrust’s mortgage operations. The 1,450-square-foot space previously was occupied by locally based café chain Urban Farmhouse, which vacated in November 2016 after about a year in business.

A spokesman for the Atlanta-based bank said it will list the Hull Street building for sale, but did not provide a timeline for when the branch will close and new location will open.

The three-story, 13,000-square-foot building was constructed in 1930 and has been owned by SunTrust or its predecessors since at least 1980, according to city records.

It’s one of several old bank buildings nearby on Hull, joined by the old Commerce & Trust and the Mechanics and Merchants Bank buildings, which sit across from one another at the intersection of 12th and Hull streets.

Both are owned by Church Hill Ventures, an acquisition and development firm run by husband and wife Michael and Laura Dyer Hild. The couple has been buying up dozens of properties in the neighborhood and is planning a new brewery in the Commerce & Trust building at 1128 Hull St.

SunTrust’s Hull location held $12.5 million in deposits as of June 30 – the lowest among its local branches, according to FDIC figures.

The bank has around 40 locations in the Richmond market and is third in deposit market share, behind Bank of America and Wells Fargo, with more than $4 billion in local deposits.

Wells Fargo also has a swap in motion, as it is shuttering its branch at 2420 Staples Mill Road next to the Libbie Mill development. That location is being consolidated in favor of a busier branch less than a mile away at 4901 W. Broad St.

Don’t except a fast surplus. Most branches closed take at least 12-18 months after a closure before they come to market.