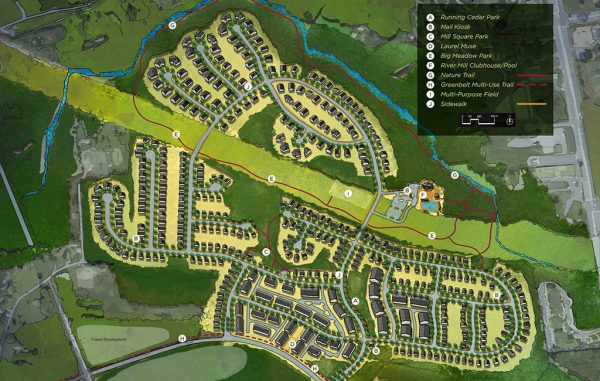 Three local homebuilders have signed on for one of HHHunt’s biggest upcoming developments.

Jonathan Ridout, who’s overseeing the project as vice president for land development for HHHunt Communities, said the builders were selected among others in the region that responded to a request for proposal in 2016, when the 250-acre development was announced.

“We looked a lot at the different types of products builders were building, and these guys fit into the categories that we had available for the different-sized lots and what type of product they could put on there,” he said. “We felt they had unique product and were able to really step it up architecturally.”

The first phase of the project, which is under development, will consist of 165 townhomes to be built by HHHunt Homes and more than 300 detached single-family homes to be split among all four builders.

In addition to the townhomes, HHHunt Homes will build houses on 86 smaller-sized lots, each 55 feet wide and about 0.15 acres.

Schell Brothers, which entered the local market last year after expanding from Delaware, will build 99 houses on similar-sized small lots and a first section of larger, 70-feet-wide lots, each totaling 0.2 acres.

LifeStyle will build 60 of those larger lots, and LeGault will build another 60 to round out the first phase.

Ridout said even larger lots for semi-custom and full-custom homes with views of the Chickahominy River will be included in a subsequent phase, the builder for which has yet to be selected. Ridout said the section could go to a new builder or one of the four involved in the first phase. 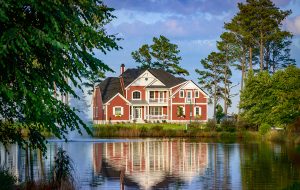 A home built by Schell Brothers.

Kotarides Builders is signed on to build the apartments, which are set to break ground later this year or early next year. The Virginia Beach-based builder paid $6 million in late 2016 for a 21-acre portion that will house the apartments, which will range from 750 to 1,300 square feet in size.

The other builders are under contract to purchase their respective lots. With site work underway, Ridout said HHHunt is aiming to have the lots ready for builders by October or November. A sales center would open in June in a retail strip at across Brook Road from the development.

Once completed, Ridout said the first phase will represent about 40 percent of the overall development. He expects that phase to take about two years to build out, while total buildout would take about five or six years.

HHHunt’s other communities include Wyndham, Wyndham Forest, Wellesley and Twin Hickory in western Henrico County and Charter Colony in Chesterfield County. In addition to River Mill, other projects in the works include Mosaic at West Creek, a 520-home age-restricted community near the Capital One campus that received approval from Goochland County last week.

Wondering if they are going to leave the massive powerlines down the middle?
https://goo.gl/maps/A6xYTMyGaSz