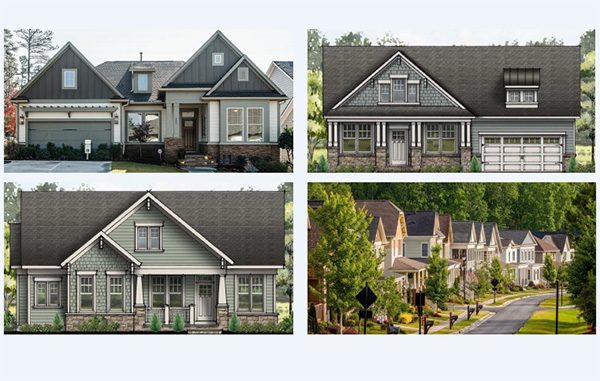 One of the largest residential developments ever proposed in Goochland County was decided Tuesday night, more than a year after the project was first introduced.

Just days after the death of longtime supervisor Ned Creasey, the remaining four members of the Goochland Board of Supervisors voted unanimously to rezone more than 200 acres beside Capital One’s West Creek campus for a 520-home age-restricted community proposed by HHHunt.

The board spent three hours deliberating the case and hearing from county staff and residents, who voiced both support and opposition to the development. Concerns included traffic impacts primarily to nearby Hockett Road, as well as precedent-setting for future residential projects.

While acknowledging those concerns, supervisors also noted the project would not impact county schools, would provide housing options for an aging demographic and would add to West Creek Business Park’s transition from a planned industrial park to its current push as a mixed-use corridor.

Contending the land could be developed with a higher intensity under its current industrial zoning, supervisor Ken Peterson said: “This is effectively a downzoning.”

HHHunt’s plan calls for 341 single-family detached homes and 179 townhomes that would be restricted to owners aged 55 and older. The development would stretch from Tuckahoe Creek Parkway northwest of the Capital One campus, wrap around it to the south and cross Broad Branch creek, and connect with Broad Branch Drive just west of Route 288.

Called “Mosaic at West Creek,” the 207-acre development would be the largest subdivision in Goochland, as well as the first to include townhomes, according to county staff. It would also include the smallest lot sizes in the county, with 55- and 65-foot-wide lots for single-family homes about 2,000 square feet in size.

All 520 homes would have first-floor master bedrooms, no vinyl siding, maintenance provided by a homeowners association, sodded and irrigated yards, landscaping and street trees. The townhomes, representing about 40 percent of the total units, would be built in the northeast and southeast corners of the development.

Amenities would include a pool, 5,000-square-foot clubhouse, fitness center, sidewalks and trails. Buildout would take about eight years to complete, with an average of 65 homes built per year.

HHHunt proposed the project just over a year ago and held three community meetings, in February, June and August. The planning commission didn’t vote on the project until November, when, absent one member, it split on a 2-2 vote on whether to recommend approval to supervisors, causing a motion to do so to fail. Supervisors heard the rezoning request in December but deferred a decision to this month.

A contributing factor to the duration of the case was a change in the county’s cash proffer policy, which was revised last month to reflect changes in state law restricting how localities can accept the one-time payments from developers meant to offset impacts on public infrastructure. Chesterfield County has likewise adjusted its policy as a result of the legislation. 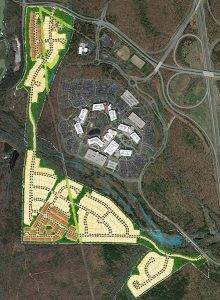 As a result of that process, HHHunt increased its total proffer amount for the project from nearly $857,000 ($1,648 per home) to upwards of $2.5 million ($4,937 per home) to cover impacts to roads, parks and public safety services. The earlier proffer amount had not included proffers for roads, as HHHunt had contended the development would generate less traffic than the office-industrial use allowed by existing zoning.

The proffers do not account for impacts to schools since the development would be restricted to ages 55 and up, with an added restriction of no residents younger than 19 allowed to reside in a home.

Kim Kacani, president of HHHunt Communities, told the board that the company has a waiting list approaching 100 people interested in the community.

The development adds to other residential projects approved or under review in the West Creek area.

To the south along Route 288, Tennesse-based Bristol Development Group is wrapping up a 373-unit apartment complex at the West Creek Parkway interchange. Farther south, at the Patterson Avenue interchange, The Pruitt Cos., which owns and operates the business park with Bill Goodwin’s Riverstone Group, has received approval for its proposed mixed-use development at the former Oak Hill Golf Course.

Meanwhile, along Hockett Road to the north, Eagle Construction of VA has proposed more than 300 homes on about 153 acres. A rezoning for that project was deferred in December and is scheduled to be heard at the board’s April 17 meeting.

Its a good move for them to do this for age restricted housing. The cash proffer seems excessive in light of the services provided but the developer has agreed to them, so be it. West Creek is fast becoming a place to live and work. How about play?

More just curious, but how is such age discrimination in housing legal? I’m not a lawyer, just curious if you know how this is governed. If one were to say you didn’t want old people (age restricted to age 25 and under), I have a feeling that would not be legal. If you said you wanted say “whites only” then that would not be legal. Why is it legal to limit housing in this way? Thanks.

specific ages are not a protected class under the FHA, race is

Because for better or worse there’s exemptions in state and federal fair housing law to specifically allow housing that is restricted to older people. See, for example, section § 36-96.7 of Virginia law: https://law.lis.virginia.gov/vacodepopularnames/virginia-fair-housing-law/

Because older people were typically the ones being discriminated against the housing laws were adjusted to allow limitations in favor of older ages. Maybe it was part of the Fair Housing Act (I forget).

I’m not aware of any other type of “legal discrimination” of any other persons by zoning of the housing industry. ADA can be limited to publicly accessible areas (clubhouses, etc.) if there are no residences that accommodate affected persons (say a second floor with no elevator)

From other news sources it seams only the townhomes will be age-restricted; is that correct or is it the entire development?