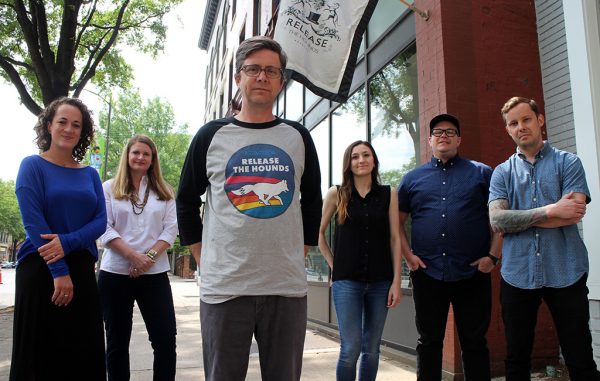 When John Mills unleashed his branding agency, Release the Hounds, on Richmond nearly a decade ago, he did so thinking its efforts could help the community as much as his paying clients.

Named this year’s Ad Person of the Year by the Advertising Club of Richmond, Mills was recognized at last month’s annual Richmond Show as much for his efforts outside his agency’s walls as for its work for clients including Eagle Bay Hardscapes, Historic Richmond and The Martin Agency.

Mills is a board member of the RVA Street Art Festival and co-founded TEDxRVA, and in 2016 he and his agency created The SoundView Project, a live-art experiment that had local musician Troy Gatrell of band Clair Morgan record songs in a glass-walled room over the course of a month.

The project, which displayed the songwriting process to people walking by Release the Hounds’ downtown Broad Street storefront, also collected more than $20,000 worth of donated musical instruments to benefit Richmond Public Schools.

Mills said a second project is in the planning stages, and his shop is also juggling other efforts, such as sponsoring a Cutaway USA cycling team and donating proceeds from a line of Release the Hounds merchandise to local nonprofit Ring Dog Rescue.

BizSense met up with Mills to learn more about those efforts, how they bleed into and out of his 9-year-old agency, and his take as Richmond’s Ad Person of the Year on the local marketing scene. The following is an edited transcript:

Richmond BizSense: How does it feel being named Ad Person of the Year? How were you announced at the ad club awards show?

John Mills: They announce it at the end; Scott Sherman (last year’s recipient) introduced me. Honestly, I was so caught up in the moment I don’t even remember what he said. I was excited and uncomfortable; it was just this surreal experience.

The recognition should really go to our team. I spearhead it because I run the agency, but none of the stuff that we do, whether it’s client work or our community engagement initiatives, would even exist if I didn’t have a team that was used to working in small-agency chaos and being really passionate, bright, caring people that are just “dive right into it” kind of people.

RBS: What motivated you to blend community initiatives into the agency? What made you want to do more than just client work?

JM: It was just something that I’m passionate about: giving back. My parents, since I was little, always did it. That’s probably why. They were always very involved with doing initiatives through their church; Meals on Wheels, which they still do today, so I grew up with them as role-models always doing something to give back.

After working at lots of different agencies over the years, it was something I was passionate about to carve out – not only because it’s important to do community-based work, but also it’s smart as an agency to keep people engaged in stuff that’s not just client work. It’s a tough industry, and it can be a grind, especially at a small agency when you have limited resources and time. To be able to work on community-based projects that people are passionate about gives them an escape from that everyday. 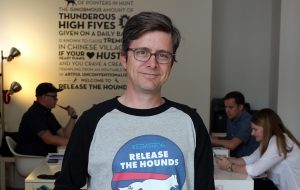 RBS: How do you take your process of creating for clients and apply that to something beyond the walls of your shop?

JM: I think a lot of the principles are the same, in that, first and foremost, you have to make people pay attention to your cause. It’s really the same as a marketing or advertising initiative: you’ve got to create an event or an experience or a message that breaks through and makes people pay attention.

The rest of it is, from an operational standpoint, just building a team of talented, passionate people … and then executing at a high level, because everyone has an idea, but at the end of the day, the production of it and the experience of it has to really be at a high level for it to maintain.

RBS: As Ad Person of the Year, what are your thoughts on the advertising and marketing scene in Richmond?

JM: I think the growth of the city and the way that the city’s developed over the last five, 10 years is becoming more attractive to keeping talent here, and also attracting talent from other places. As a result, the level of creativity and work in the city has really gotten to be at a high level, which is really cool to see.

Having Arts & Letters, for example, land here a year ago is great for the city, because there’s some extremely talented people that work there. Richmond needs more of those-size agencies. Every time an agency puts out great work, it inspires other agencies to pick their game up – us included – to create great work, so having all this talent here is really raising the bar for Richmond and it’s a really exciting time creatively.

RBS: What other shops in town are producing work you admire?

JM: WorkLabs does amazing work. Mondial is awesome and doing great work. 903 Creative, Evergib, Elevation, and I have a lot of love for The Martin Agency, who we’ve done lots of work with over the years.

RBS: Who are your mentors or personal heroes?

JM: If I think about who changed the trajectory of my career, there’s a guy named Richard Wise, who was a strategic planner at my first agency (Mezzina/Brown) when I was a copywriter. I would listen to him give briefs and talk, and it made me realize that as much as I wanted to do the creative side, which has always been something I’ve been so interested in, I became super-interested in the strategic side: why are we doing this?

He flipped a switch in me that eventually sent me from being on the creative side for seven years to going on the strategic side, and I think the culmination of working on creative and working as a planner, working on the account side, has given me tools to be able to run an agency, to be able to see it from all the different sides.