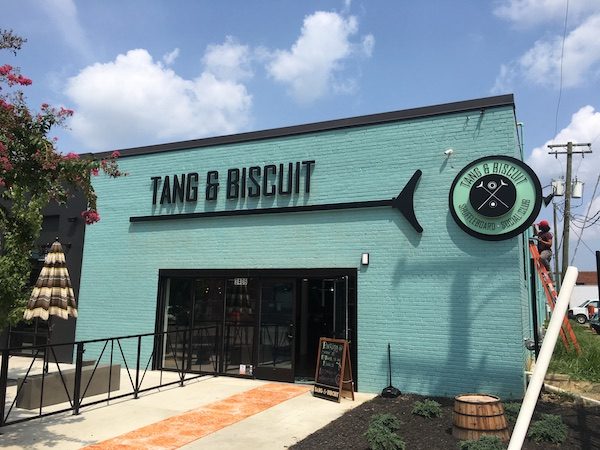 Backed by the owners of a large local payroll company, the city’s latest entertainment option has slid into Scott’s Addition.

The venue, owned by Dominion Payroll co-founders David Gallagher and David Fratkin, features 10 full-size shuffleboard courts, a full bar, and other games such as giant Jenga and pingpong. It also has a rentable 2,000-square-foot event space.

The 18,000-square-foot business is named for the cues and discs players push down a waxed surface toward a target. 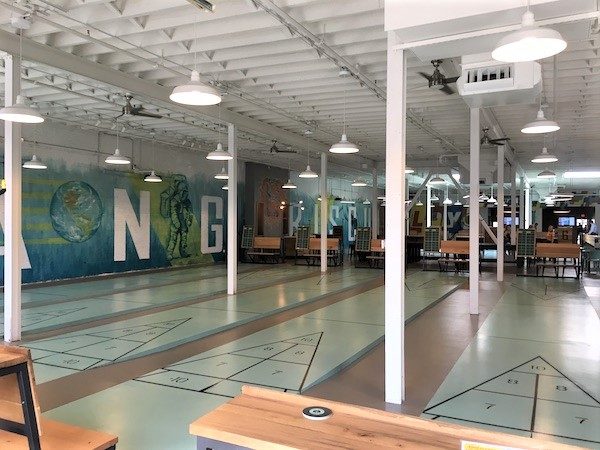 The former warehouse was painted with murals by local artists. (Mike Platania)

Tang & Biscuit held a soft opening in late August, about eight months after the project was announced. The group purchased the building last year for $1.7 million and invested up to $2 million in the buildout.

Greene’s Commonwealth Construction Management was the project’s contractor. 510 Architects was the designer. 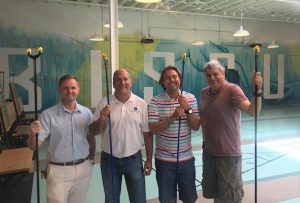 “There are so many breweries, this is kind of an example of what entertainment can be when you add in service and a broader range of your target demographic,” Chadwick said. 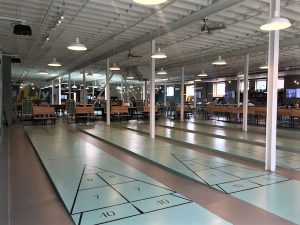 “We’re probably going to kick them off in the fall. We have to work out the details, but it’ll be recreation,” he said.

Tang & Biscuit is exploring the idea of adding more locations of the concept.

“We don’t have a city or state in mind, but we’ve been getting a lot of calls from development sites,” Fratkin said.

Bingo, a bar-arcade, restaurant and brewery concept, is preparing to open at 2900 W. Broad St.

Congratulations to the Dave’s on this amazing cool new concept in Richmond’s Scott’s Addition. Great atmosphere, cool design, and amazing food and drinks. If you have not checked it out it is a must see place when in Richmond!