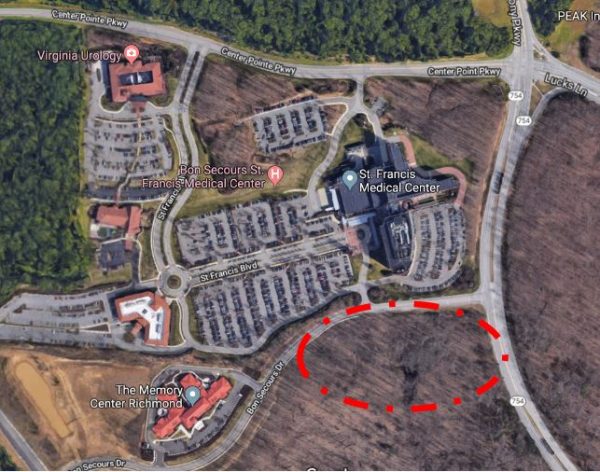 A map showing where the new facility is slated to rise.

Looking to ease growing pains at two of its facilities south of the river, a local health system is eyeing an expansion of one of its Chesterfield campuses.

Bon Secours is planning to construct a three-story, 90,000-square-foot medical office building on about 7.8 acres it owns at 13701 Bon Secours Drive next door to its St. Francis Medical Center, according to a preliminary site plan filed with the county’s planning division.

Emma Swann, Bon Secours spokeswoman, said Tuesday the hospital plans to start clearing the site to prepare for construction during the first quarter of 2019. Construction is slated to take 18 to 24 months.

Richmond-based Gresham, Smith & Partners is listed as the project’s architect. Timmons Group has been retained as site engineer. A general contractor has not yet been secured.

Once constructed, Swann said the new medical office building will include a surgery center, along with office space for providers that could be relocated from the primary medical campus to the new office building – freeing up space at St. Francis.

“The current medical office space is almost at maximum capacity on both the St. Francis and Westchester campuses,” Swann said. “St. Francis saw a need to expand its operating room capacity, which prompted the need for a surgery center.”

This latest investment by Bon Secours will add to a growing list of projects the hospital system has completed in the region.

Bon Secours also has approvals to construct a 25,000-square-foot medical office building along Nine Mile Road on a 1.2-acre block in front of Richmond Community Hospital.

As part of a $53 million redevelopment of the former Westhampton School property at 5800 Patterson Ave., Bon Secours is slated to construct a 55,000-square-foot building on the site.