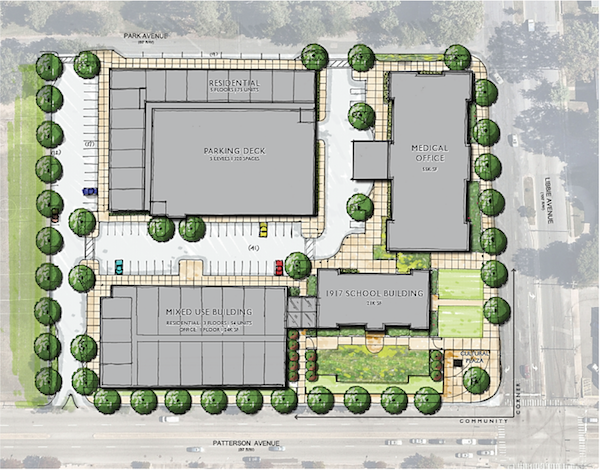 The oldest part of the Westhampton School will be preserved as part of the redevelopment of the site. (Courtesy of Bon Secours)

After more than six years of fits and starts, the future of the Westhampton School seems to be decided.

Bon Secours announced Friday that Thalhimer Realty Partners has been selected to redevelop the long-vacant, city-owned property at 5800 Patterson Ave into a mixed-use, $53 million project.

To make way for the new buildings, TRP and Bon Secours are planning to raze one of the two buildings on the site, while preserving the older of the two, which was built in 1917.

TRP principals Jason Guillot and Drew Wiltshire presented preliminary plans for the development at a community meeting on Friday.

The project will include 129 apartment units, some of which will sit above retail and office space fronting Patterson. Another section of apartments will wrap around a three-level parking deck. Wiltshire said the apartments will be mostly one-bedroom units with some two-bedroom ones. 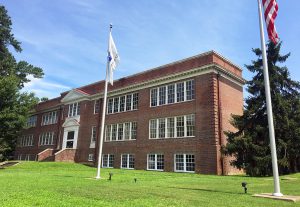 The Westhampton School will be transformed into a mixed-use development including apartments and commercial office space. (J. Elias O’Neal)

The 1917 school building will be converted into commercial office space, and TRP plans to create a “cultural plaza” near the northwest corner of Patterson and Libbie avenues.

The development will consist of more than 250,000 square feet in total.

Guillot, who also is redeveloping the former Westhampton Theater site, said the school building project is designed to be pedestrian-oriented.

“We wanted to make sure the project is safe for walking and biking,” Guillot said. “If you walk down Patterson Avenue today, there’s not a lot of activity on the north side of Patterson, in front of the school on the sidewalk. We want to change that.”

The 6-acre parcel is owned by the city’s Economic Development Authority, and Bon Secours signed a 60-year lease for the site in 2013 as part of the deal it struck with then-Mayor Dwight Jones’ administration to help finance the Washington Redskins’ training camp facility.

The health system pays the city $5,000 rent per year, and has two 20-year options to extend the lease at the end of the 60-year deal.

Bon Secours has waived its tax-exempt status on the property and pays the city about $111,000 per year in property taxes for the Westhampton School parcel. The health system projects that after the land is redeveloped, it will pay $636,000 in annual property taxes to the city. The property most recently was assessed at $7.9 million.

The deal between the EDA and Bon Secours also requires the health system to pay the city an additional $28,000 in ground maintenance and $100,000 to Richmond Public Schools.

Bon Secours spokesman Rhodes Ritenour said the health organization will be subleasing the property to TRP, which will own the new buildings and collect rent from its tenants. 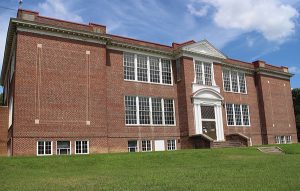 Terms of the sublease between TRP and Bon Secours have not been disclosed. Ritenour said while it’s possible that Bon Secours will be collecting more in rent from TRP’s sublease than it pays to lease the land from the city, “It’s hard to imagine the sub-ground-lease … being greater than what we’re paying to the city as part of our lease.”

He said the value of the sublease will be based on the amount of the property’s “fair market value” and that Bon Secours is having an appraiser tell them the fair market value.

Ritenour added that Bon Secours and TRP will share the expense of building the parking deck.

Guillot said the development will have 395 parking spots, with 320 in the deck and an additional 75 on nearby lots.

TRP has not selected an architect or general contractor for the project, and Wiltshire said they will not use historic tax credits to help finance it.

TRP’s project and a separate 55,000-square-foot medical office building that Bon Secours is building on its own site along Libbie Avenue would allow the health system to hit all of the goals of its performance agreements with the EDA. Those include investing at least $24 million in development capital on the Westhampton site, creating 120 full-time jobs there that will be maintained for 10 years and establishing at least $10.8 million in payroll and benefits from ventures on the property.

The deal with TRP would mark the end to a long saga for the Westhampton School site.

Bon Secours initially planned to have the school building house a nursing college, but scrapped those plans last year and invited the private sector to propose uses for it.

Bon Secours received 22 letters of interest from developers and 11 proposals, the details of which Ritenour said he could not disclose due to nondisclosure agreements.

“What I can tell you is (the other proposals) were all over the map in terms of what they did,” Ritenour said.

The deal also marks another big investment for TRP, which is the development arm of local commercial real estate firm Cushman & Wakefield | Thalhimer.

The company this summer bought the former Pet Dairy property near The Diamond for $5.5 million and this month paid nearly $15 million for the Southern States headquarters building at 6606 W. Broad St.

Bon Secours is holding another meeting covering the same topics in the St. Mary’s Hospital auditorium on at 6:30 p.m. Monday, Sept. 24 and another on Oct. 9, where it will show its final plan for the property.

one can’t beat the location. its refreshing to see that upscale apartments will be built there as well as loads of parking.

Being new neighbors, just across the street, we are anxious to see the development of the Westhampton School. Glad they are able to retain some of the older architecture. Should be an exciting time along the Avenues!