The exterior of the new aquatics facility. (Renderings courtesy of Henrico County)

County officials and the YMCA of Greater Richmond on Tuesday announced plans to develop an $8 million, 20,000-square-foot aquatics facility on county-owned land beside the Eastern Henrico Recreation Center.

The 6-acre site, across Watts Lane from the center, would include an eight-lane, 25-yard competition-style pool and a warm-water instructional pool with zero-depth entry, a waterslide and a family spray area. The facility also would include locker rooms, retractable spectator seating and parking. 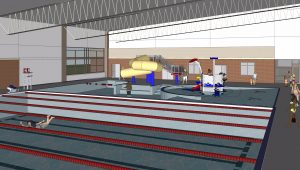 Inside the planned facility.

Henrico will lease the property for 20 years to the Y, which will build the facility with $8 million in county funds and manage it as part of its local network. Following funding and lease approvals slated to start next month, construction would start in March, with the facility opening in early 2020.

County Manager John Vithoulkas said the project came about after county supervisors expressed a desire for a recreational pool at their board retreat in January. The Y was identified as a management partner, and a nearly $27 million surplus from last fiscal year’s budget made it possible to go forward with the project, Vithoulkas said.

“All of those things came together,” he said. “Ultimately the thanks goes to the Board of Supervisors for laying the challenge and pushing the staff to a place where we did not think we could get to just one year ago.

“In the past five years, we’ve had 35 incidents where a child has either drowned or nearly drowned, and that is entirely unacceptable,” Vithoulkas said, describing the facility as the county’s latest effort to “drown-proof” Henrico.

In addition to the Y’s pool-based programs, the facility is expected to accommodate practices and meets for county high school swim teams and youth summer camps. Vithoulkas and Amy Cashwell, superintendent of Henrico County Public Schools, also indicated potential expansions to school programs that could see Henrico participate in the Y’s “Learn to Swim” campaign that provides free lessons to second-graders. 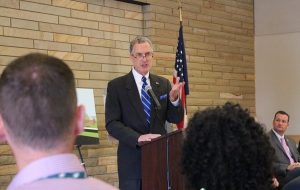 “Up to this point, we have not been able to do it in Henrico County,” said Tim Joyce, president and CEO of YMCA of Greater Richmond. “But now, because of conversations and future partnerships with the public schools, we’re excited about what can happen there.”

Joyce said the project involved months of discussions with county staff and support from the local philanthropic community. Among those in attendance for the announcement was Bobby Ukrop, though a county spokesman said Ukrop is not affiliated with the project.

A shortage of public pools

Henrico rec and parks director Neil Luther said the facility meets a need in a part of the county where public pools are hard to find. He said when the 25,700-square-foot rec center opened seven years ago at 1440 N. Laburnum Ave., the county heard from residents who were expecting a pool.

With the Y’s involvement, Luther said the project is viable by taking the operations and management burden off the county.

“They were willing, and that was the biggest hurdle,” Luther said, “because building the pool in some sense is the easy part. Running it and managing it and making it useful to the community is really what the trick is, and the Y has been in the business of doing that for a long, long time.”

The facility adds to other public facilities that have formed a hub of sorts on that stretch of Laburnum Avenue. Moseley Architects is designing the facility, and Kjellstrom and Lee is on board as the contractor. 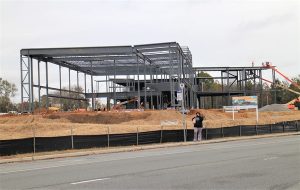 The under-construction Fairfield Area Library across the street from the aquatics facility site. (Jonathan Spiers)

In addition to the rec center, the corridor between Harvie and Creighton roads is home to Harvie Elementary School, the health department’s east clinic, beside the aquatics facility site, and the new Fairfield Area Library under construction across the street – a $29 million, 44,800-square-foot project that will replace the existing 40-year-old, 16,000-square-foot library at 1001 N. Laburnum Ave.

The new library, designed by BCWH (now Quinn Evans Architects) and Boston-based Tappé Architects and constructed by Gulf Seaboard Construction, is among projects county voters approved in a $420 million bond referendum in 2016. In September, the county announced it was reallocating some funds from that referendum for two $80 million replacements of Highland Springs High School and J.R. Tucker High School.

Fairfield District Supervisor Frank Thornton said more is to come for what he now refers to as “the Laburnum corridor.”

“This is truly a wonderful thing for Henrico County,” Thornton said Tuesday. “We are not done yet bringing services to the community and investing here on the Laburnum corridor.”

Correction: Tappé Architects designed the new Fairfield Area Library with BCWH. An earlier version of this story incorrectly listed Tappé as the contractor. Gulf Seaboard Construction is the contractor.