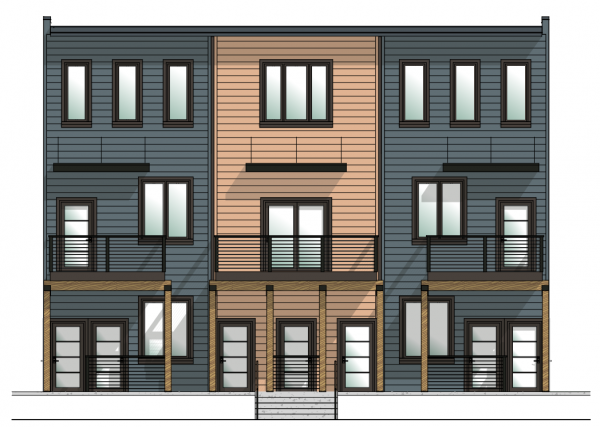 Following the completion of a mixed-use project around the block, a local development firm is at it again in Manchester – this time with apartments on the drawing board.

Chesterfield-based RJ Smith Cos. is preparing to break ground on River Row, a nine-unit infill development set to rise at 1406 Bainbridge St.

The company, run by Richard Smith and Janet King, purchased the 0.2-acre site for $256,000 through a city foreclosure auction this year. Prior to being cleared in the 1990s, the land housed townhomes that later were turned into apartments.

The $1.5 million project is expected to kick off in January, King said, with delivery of the units targeted for June 2019.

Plans call for the three-story development to include six two-bedroom units and three one-bedroom apartments. Besides the walkability of the neighborhood, King said all of the units will enjoy large patio and balcony spaces. She added the development also will include onsite parking and each unit will have 10-foot ceilings.

“The idea is to celebrate the James River,” King said. “We designed these units with that in mind so the future tenants can enjoy the outdoors on large terraces, or have enough room to store their kayaks.”

RJ Smith is the builder on the project, with financing from Union Bank & Trust. Claire Shirley, president of Gradient PC, completed the civil engineering work for the site, while Sean Wheeler with Richmond-based Walter Parks Architects designed the project.

RJ Smith’s latest project adds to millions of dollars of investment the company has poured into Manchester, specifically along Hull and Bainbridge streets.

A block over from River Row, it built The Bridge, a four-story, 15-unit mixed-use building at 1312 Bainbridge St. that is 100 percent occupied after completing construction about a year ago. The ground-floor retail space is being converted into a gallery that includes pieces from local artists such as Diane Clement and Eli McMullen.

Prior to completing The Bridge, RJ Smith wrapped up work on Urban Charm, a mix of 20 one- and two-bedroom apartments, and two commercial spaces, at 1319 and 1321 Hull St.

A block up on Hull, the company also plans to redevelop two buildings at 1401 and 1405 Hull St. with multifamily units and two 2,000-square-foot commercial spaces.

Smith said they also are looking to demolish the building at 1511 Hull St. and upgrade the structure at 1505 Hull St. to add 75 apartment units and commercial space.

While mixed-use and multifamily rental units have helped drive redevelopment efforts in the Manchester properties, Smith said the key to helping transform the neighborhood is more for-sale residential units.

“That’s the next step for the neighborhood,” Smith said. “We’re always going to adapt to what the market needs.”

As renters look to become homeowners, Smith said his firm will look for prime infill sites suitable for single-family and condo development. They already have begun to scout lots south of Cowardin Avenue in the Blackwell, Swansboro and Maury neighborhoods.

“That’s the next frontier,” Smith said. “It’s even more attractive now that the historic designation has been expanded …”

In October, the Virginia Department of Historic Resources (DHR) approved the addition of the Blackwell neighborhood and an expansion of an existing Manchester boundary to the Virginia Landmarks Register. The approvals add nearly 700 buildings to the state register, giving those properties added protections and making them eligible for state historic preservation tax credits, which have driven a wave of redevelopment in and around Manchester in recent years.

“It’s all part of bringing it back,” King said of the group’s mission to revive the historic neighborhood since buying into the area nearly four years ago. “Each project is a bridge that is reconnecting the community to its former vibrancy. Patience is a virtue, but the work is beginning to pay off.”

Rj Smith was instrumental in the current Renaissance of the Hull Street business corridor. More than 30 companies toured the 1300, 1400 and 1500 blocks with us before Richard and Janet, yet they made their offer immediately upon seeing the buildings. They knew what is was that they wanted to do and they’ve done it well. Congrats to their company for helping turnaround that area.