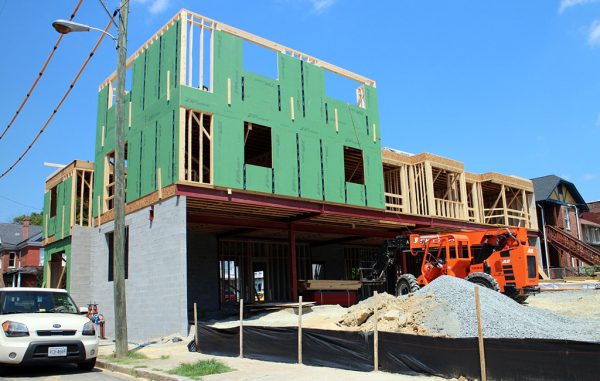 The back of The Bridge building as viewed from 14th Street. (Jonathan Spiers)

Two years into a multimillion-dollar effort to revive several buildings on and around Hull Street, a local construction company’s venture into urban development is beginning to show results in the heart of Manchester.

Construction is underway at 1312 Bainbridge St., the second phase of RJ Smith Cos.’ three-part project to revitalize several clusters of properties on Bainbridge and Hull, each anchored alongside West 14th Street.

Late last year, the firm wrapped up work on the first phase, dubbed Urban Charm, a mix of 20 one- and two-bedroom apartments and two commercial spaces at 1319 and 1321 Hull St.

On the other side of the block just behind those buildings, the four-story, 9,000-square-foot structure currently going up on Bainbridge will house 14 apartments above street-level parking, which will serve those units and the commercial spaces on Hull.

The new building, dubbed The Bridge, replaces the former Bainbridge Art Center, which RJ Smith demolished after purchasing the properties in 2015. Construction is scheduled to wrap up by February, with leasing for the apartments getting underway in March.

The company also is targeting as part of the second phase two buildings across 14th Street, at 1401 and 1405 Hull St. Janet King, senior vice president with RJ Smith, said that project is in design and would convert the buildings to mixed-use, with multifamily units and two 2,000-square-foot commercial spaces. 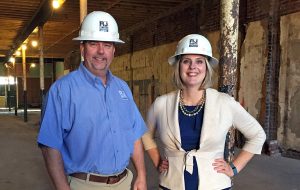 Those two phases represent a total investment by RJ Smith of just over $5 million, King said.

King, who is leading the project with company president Richard Smith, said they hope to fill the commercial spaces with creative users and restaurants, having designed one of the Urban Charm spaces specifically to accommodate a restaurant. While several restaurants have toured the spaces, King said they have yet to secure a tenant and now are marketing the properties as office space.

“There’s been a lot of demand and viewings for office,” King said. “We did what we thought the community needed, in investing and being really purposeful in the design for a restaurant, but we haven’t seen any restaurateur willing to pioneer with us. We would love to see someone creative, who sees the potential that we do in the community and the need, come join us.”

Terry Earnest with Chesterfield Commercial Realty is handling leasing for the commercial spaces.

King said they also are marketing the spaces to artists and designers, in hopes of securing tenants who might have used the Bainbridge Art Center building. That building had housed local artist Mehmet Sahin Altug, who has since moved his studio to Carytown.

As for the apartments, King said interest has been strong, with all 20 Urban Charm units now leased. Monthly rents for those units range from $825 for a 500-square-foot studio to $1,200 for a 750-square-foot, two-bedroom apartment. Monroe Properties is handling leasing for those units. 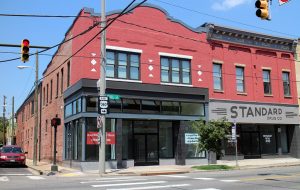 Walter Parks Architects’ Sean Wheeler drew up the designs for the building, and RJ Smith is serving as its own general contractor. The company is seeking historic tax credits for the existing buildings and working with Union Bank on financing.

The projects add to other investments being made in Manchester.

And the owner of an East End barbecue joint is opening a new restaurant, Pig And Brew, at 1313 Hull St.

RJ Smith Construction is a godsend to that strip on Hull Street. Colliers was pleased to help them acquire those blocks. within 5 years Hull street will be transformed completely into a corridor of businesses and and apartments in five to ten story configurations lining both sides from the 14th Street bridge to Commerce Street and then the historic renovation from Commerce to Cowardin. It’s going to be an amazing Avenue.