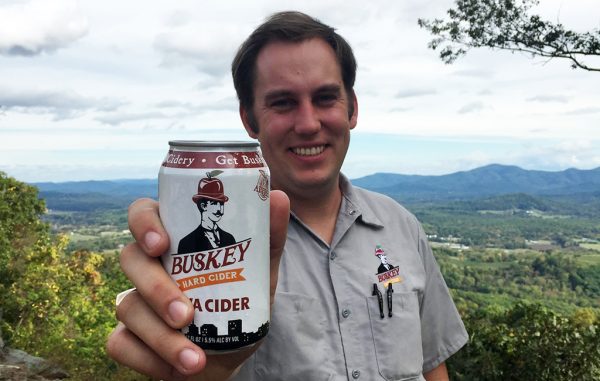 Founder and CEO Will Correll with a can of cider. (Photos courtesy of Buskey)

Two local cideries are starting off the new year with something new, with one picking up the pieces of a defunct coffee startup and the other adding gluten-free beer to its roster.

Buskey Cider is increasing its production capabilities at its cidery at 2910 W. Leigh St. in Scott’s Addition, adding an 1,800-gallon brite tank that it acquired from Convergent Coffee Co., which is going out of business.

The addition allows Buskey to nearly double its production, said Will Correll, who owns the business with wife Elle.

It’s the second time Buskey has added tanks. Correll said the success of its seasonal ciders, including watermelon rosemary, peach tea and pina colada, led to the need for more capacity. 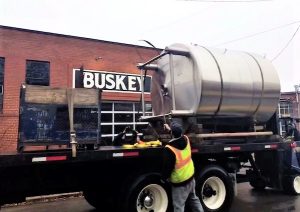 Buskey Cider acquired a tank and other assets from Convergent Coffee Co.

“We had a successful year, but a lot of time we weren’t able to capitalize on that success and get people the product they wanted,” Correll said. “Getting the new 60-barrel tank in there is a pretty huge upgrade for us.”

Buskey also purchased the rest of Convergent’s assets, including its lease at a 10,000-square-foot warehouse at 1716 Rhoadmiller St., which Correll said they’re using for storage. He added that Buskey is looking to sell off some other production hardware that was included in the purchase.

Buskey has been steadily growing its presence throughout the state, opening a satellite location in Cape Charles and starting distribution in Southwest Virginia last year. Correll said Buskey is looking to bolster its distribution presence in Hampton Roads before heading north, with its eyes on Northern Virginia.

Meanwhile, another husband-and-wife-owned cidery will soon be adding beer to its offerings.

Courthouse Creek Cider is beginning to brew gluten-free beer at its Goochland facility at 1581 Maidens Road. 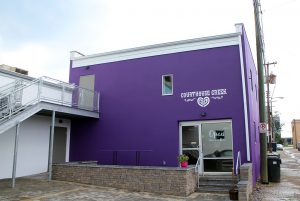 In November, Courthouse Creek received a conditional use permit to add a microbrewery and distillery at its flagship location in Goochland.

“We thought it’d be nice for us to have a product that might appeal to those that are staunch beer drinkers or those not yet willing to give cider a try,” Cioffi said. “We already have a gluten-free product and we have a dedicated gluten-free facility. It makes sense.”

Courthouse Creek purchased a one-barrel brew system to do so, and Cioffi said there’s not much else they need to buy to get started.

The beer will be named Courthouse Creek.

The beer will be available only at Courthouse Creek’s Goochland location. The company doesn’t have plans to bottle or keg the beer.

“Right now, it’ll just be on tap at the farm. We’re really looking at it as a supplemental offering at the farm,” Cioffi said. “Our primary mission, and what we produce, will always be cider first.”

Cioffi said he believes breweries will begin taking the reverse route, going from beer to cider. Hardywood Park Craft Brewery already has taken steps to do so with its West Creek Cider Co. that’s in development.

“It’s coming,” Cioffi said. “Breweries, let’s be honest, are going to start producing cider, or push on with gluten-free options, because there are enough customers that want that.”

I love cider, and so I’m looking forward to the new offerings. I wish someone would make mead along the lines of B. Nektar’s line, which is no longer available anywhere (that I can find) in Virginia, unfortunately.

Hi, Millie. If you’re looking for meaderies throughout the state, Cheers Virginia has a comprehensive listing of them in our directory – https://www.cheersva.org/meaderies/