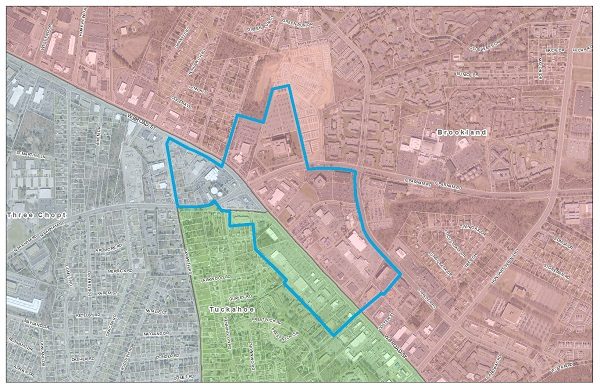 The commercial corridor around the intersection of Broad and Parham Road is one of the study areas. (Maps courtesy Henrico County)

An effort to facilitate denser development along parts of one of Henrico County’s oldest commercial corridors is getting underway with a weeklong planning session that kicks off tonight.

County planners are holding a series of meetings this week – an intensive planning workshop known as a “charrette” – to present ideas and hear from the public on what future development and redevelopment could look like within two business-centric areas along a stretch of West Broad Street.

Located about two miles from each other, the study areas include the commercial corridor around the intersection of Broad and Parham Road, stretching about a quarter-mile to the east, and the Genworth-anchored Brookfield Office Park and adjacent residential properties southeast of Broad and Interstate 64.

A goal of the charrette is to produce what’s known as a form-based zoning code for those areas that would allow for more flexibility in development, redevelopment and infill projects than the county’s existing zoning code, a decades-old document that’s in the midst of a two- to three-year update.

Ben Blankinship, Henrico’s zoning administration manager, said the form-based code option would be a first for the county, allowing owners who want to add density to their properties to do so while foregoing the rezoning process. 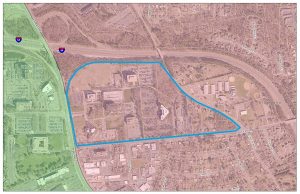 “We knew as part of the code update that we wanted to explore form-based code and determine where it was appropriate,” Blankinship said.

“We’re not taking away the underlying zoning. We would just be adding an option that if they wanted to redevelop the site for mixed uses and higher intensities, then they could do that as long as they were willing to work within the form that we have worked out.”

The county is working on the code update with Denver-based consulting firm Clarion Associates, which brought in Florida-based Dover, Kohl & Partners for the form-based code component. Blankinship said the latter firm’s work in Albany, New York, has seen that city call it back five times to establish a total of six form-based code zoning districts there, adding that the hope is for similar results.

“We want to get one or both of these areas to develop and see what’s successful and what may need to be adjusted, and then we’d like to have them come back in the future and do some additional work with us.

“We have more areas in mind as well,” he said, adding that those areas have not been formally identified. “This would not be the end of this process, but what we have in the budget right now is a limited scope.”

Blankinship said the budget for the overall code rewrite, which started over a year ago, is about $500,000.

The two study areas are largely defined by what Blankinship described as suburban-style retail and shopping centers and office parks developed in the 1960s and ’70s, with expansive parking lots that could provide opportunities for infill or redevelopment with mixed-use projects involving structured parking decks.

“It’s not worrying so much about segregating the uses but thinking more about the form that the development takes,” he said. “As long as it takes a form – the actual massing of buildings, where the streets go, how the setbacks work, how much of the ground is covered by buildings and parking – you can design the form of development you want. 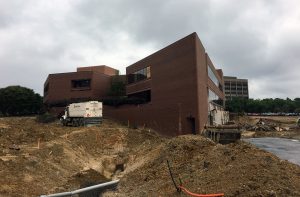 With the option allowing users to forego the rezoning process, Blankinship said property owners and developers are spared the time and expense involved, which he said can in turn make denser development more affordable and viable, adding some predictability of what could be developed.

“It’s difficult to invest in property before it’s been rezoned because you just don’t know what you’re going to get through that process, but also just in terms of the intensity of the use, you have to get a pretty high-dollar return in order to make it worth the money to build structured parking,” he said.

The corridor around and between the two study areas has seen investment interest and redevelopment pick up in recent years. Developers have been homing in on Brookfield Office Park and infill potential there, while the former SunTrust building that looms large next to Parham and Broad remains vacant and for sale, while new residential development is starting to take shape around it.

An infill condo development by Stanley Martin Homes is set to replace the former Lawrence Dodge dealership, about halfway between the two study areas. Where that project required rezoning approval, Blankinship said infill in the study areas could circumvent that process through the form-based code option. 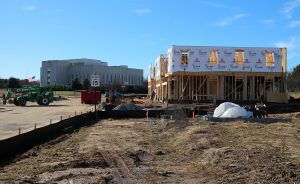 The first building under construction as part of the new residential development planned beside the SunTrust building site. (Jonathan Spiers)

The charrette kicks off tonight with a “hands-on design” session from 6 to 9 p.m. at the Henrico Training Center at 7701 E. Parham Road, followed by “open design” sessions in which citizens can drop by at their convenience Tuesday through Thursday from 10 a.m. to 6 p.m. at Libbie Mill Library.

Results will be presented in a final session Friday from 6 to 8 p.m. at the county government center boardroom at 4301 E. Parham Road.

Correction: The consultants involved in the code update developed form-based codes in Albany, New York, not Buffalo as previously reported. The story also has been updated to correct the spelling of Ben Blankinship’s last name.