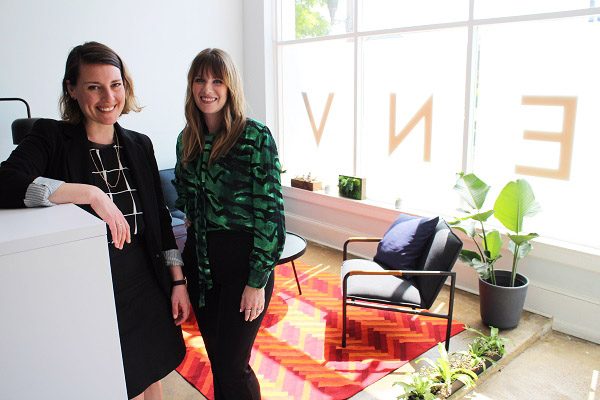 One year after bringing a national architecture interior design brand to Richmond, a growing local team has drawn up an office space to call its own.

The Richmond office of New York-based design firm ENV has set up shop in Manchester at 917 Hull St., filling a 1,600-square-foot space that previously housed a consignment store.

Led by principals Whitney Campbell and Laura Marcus-Plant, the independently owned office is one of several for ENV, which has similarly structured outposts in New York, New Jersey and Philadelphia.

Campbell and Marcus-Plant, who met at downtown-based Evolve Architecture after respective stints at other firms in New York, launched the office about this time last year, operating initially out of the Scott’s Addition Gather coworking space. 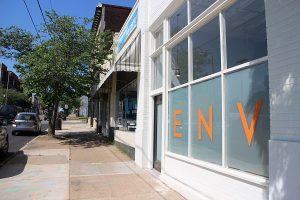 The storefront at 917 Hull St. in Manchester.

The business partners signed a five-year lease for the Manchester space, which Campbell spotted via a listing notification from One South Commercial. One South’s Ann Schweitzer Riley brokered the deal on behalf of the landlord.

Marcus-Plant said they’d had their eyes on the neighborhood since one of their clients, marketing agency Circle S Studio, moved to Manchester’s Corrugated Box Building.

“We’d been visiting them, and just being in Manchester piqued our interest,” Marcus-Plant said. “Whitney discovered this space, and the address – 917 – is the area code to both of our cellphones from living in New York.”

“It doesn’t mean anything to anyone else, but we thought it was kind of serendipitous,” Campbell said.

The four-person team moved in April 1. The team includes designers Lucy Dabney and Richard Rozewski, both graduates of VCU’s interior design master’s program. Dabney also did a stint at Evolve, which Wendel acquired in 2016.

Primarily focused on Richmond, the office serves as a Southeast regional hub for ENV, whose nearest East Coast outpost is in Philadelphia. While Campbell and Marcus-Plant share ownership of the Richmond office and operate it independently, the affiliation provides access to ENV’s broader staff and resources as projects demand them. 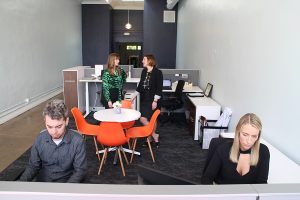 The space includes room for growth for the four-person team, which includes designers Richard Rozewski and Lucy Dabney.

With those resources at their disposal, Campbell said workload will dictate further growth. She said their lease has an option to terminate after three years if they end up needing additional space.

The office’s current workload recently got heavier with Lynx Ventures awarding ENV design work for all office and retail spaces in The Current, a mixed-use development under construction in Manchester, just a few blocks down Hull Street from their office.

Campbell said the Manchester move has come with minimal buildout costs, primarily involving painting and furnishing the space. The office has room to grow with additional desks for at least two more full-time employees. A back room also serves as a library with extra desk space for consultants working on projects.

Note: This story has been updated to acknowledge One South Commercial agent Ann Schweitzer Riley represented the landlord in the lease negotiation.

Congratulations to you both!