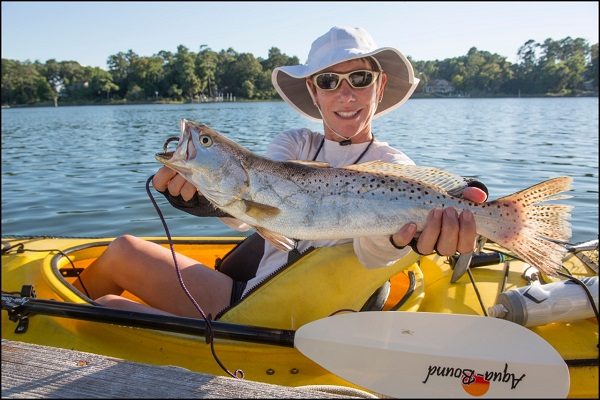 Andrea Levine with a catch from her kayak.

What do residential real estate and modern home design have in common with kayak fishing? Andrea Levine.

The chairwoman and co-founder of Modern Richmond and agent at One South Realty Group picked up an unexpected pastime when she and her husband, photographer Kent Eanes, built a house a decade ago on Virginia’s Northern Neck: fishing the waters along the Chesapeake Bay by kayak.

While seemingly worlds apart from each other – and that’s partly the point – Levine notes her hobby is not completely unrelated to her day job and interest in modern architecture. In fact, there’s an architectural term and home design approach that links them together, she said.

“I feel that we all have a need for an experience outdoors or away from the urban life in order for us to function in society,” Levine said. “There’s a word for that called ‘biophilia,’ which is used a lot by the architect world, which primarily says that this is where we came from and this is what we need.” 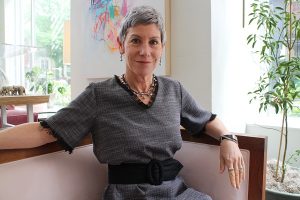 As often as she can during fishing season, Levine said she heads east and out onto the water in her 14-foot plastic sea kayak, equipped only with assorted light tackle and gear including a net, an anchor, a measuring tool, a rag, pliers and a flotation device.

Rather than reel fish onto her vessel, Levine said the sea trout and rockfish she typically catches are pulled alongside on a line as she paddles, preserving what little room she has to work with on board.

“I predominantly troll,” she said, “meaning the rod is attached to a holder on my kayak and I am paddling at a fishing pace. When a fish hits, the rod bends and I bring the fish in – hopefully.”

If it’s a big catch, Levine said the process can come with quite a ride.

“When you catch a 25-inch rockfish on your rod from a kayak, it’s a lot of fun,” she said. “That fish will take you for a little trip before he or she tires out.

“The catch that has rock-and-rolled me the most is a skate,” she said, referring to the ray-like fish that is common in Bay waters. “They like the same plastic lures that I use for my other fishing. When you catch one, they go – and they go kind of fast and kind of far for a little while until they get tired out.”

Between such excitement, Levine said the experience is serene and peaceful, and a much-needed respite from the day-to-day grind of real estate sales.

“Because of what I do for a living, this is like the other side of the universe,” Levine said. “This is what gives me relaxation and tranquility and juice and everything that I need to get back to what I do, because what I do is 24-7 and challenging and a lot of work.”

Levine’s path to Richmond real estate started in New York, where the Bronx native studied ceramic arts in college and was making mixed-media and porcelain jewelry before moving from Manhattan with her first husband, Mark Brandon, who opened the former Davis & Main restaurant here.

Levine continued making art, and doing retail and wholesale shows, before getting involved in the film industry as an extra. That led to a 10-year stint as a prop master and assistant on TV commercials and feature films such as “A Walk to Remember,” “Ladder 49” and the locally filmed “The Contender.” 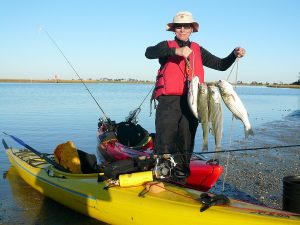 Using the trolling fishing method, Levine hauls in her catch via lines alongside her kayak.

Desiring something different that involved less travel, Levine switched careers again in the early 2000s, following her longtime interest in architecture to become a real estate agent, initially with Long & Foster before joining One South in 2009.

A licensed EcoBroker, Levine focuses primarily on eco-friendly sustainable housing that often involves homes with modern designs. Projects fitting the bill that she’s listed while with One South include the New York-inspired TriBeCa development in Randolph, the Jefferson Park townhomes beside Jefferson Park, and a row of redeveloped townhomes along O Street in Church Hill.

Her focus area also led her to co-found Modern Richmond, a group that promotes modern architecture in town through events and house tours. Levine said the group, which recently marked its 10th anniversary with the release of a book compiling featured properties, has brought her background in art and interest in architecture full circle.

“My art expression is now Modern Richmond,” she said. “It’s exciting to see, both in the commercial world and the residential world, that modern architecture is being embraced.”

Back on the water, Levine also spends her time afloat sailing Sunfish boats, often competing in regattas. While she can handle a bigger boat, Levine said when it’s time to fish, she always returns to her kayak.

“For me, it comes down to how basic can I get, how much challenge can I give this sport, because it still is a sport, but I want to equal the playing field – if there is such a thing – to make it more of a challenge. 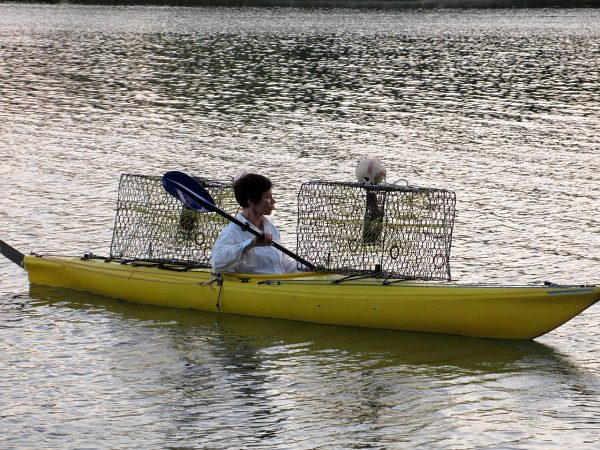 ‘It’s my office away from the office,’ Levine said of her fishing spots.

She is the best. Says what she does. Does what she says. All with class.